EQ is the sub-brand that shelters the electrified models of Mercedes-Benz. Everything from the smart fortwo to the GLE wear the blue-silver logo when they feature an electric motor. But what would a Mercedes EQ Unimog look like?

As inappropriate as it may be, Mercedes-Benz might have already thought of it. An EQ Unimog, to carry over the tradition of the company’s workhorse, in series production since 1949. But how would a man of the wild recharge a battery when he drifts away from the civilized world?

Digital artist Artyom Trofimenko apparently things so. Currently a car designer at Renault in the capital of Romania, Bucharest, the Russian is a graduate of the Politechnic University in Moscow. He also used to work for Kamaz truck building company. 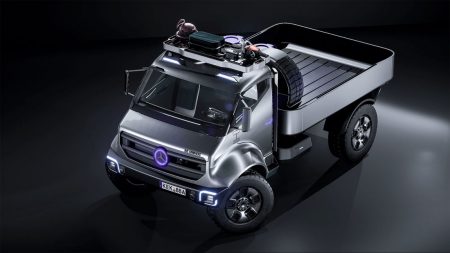 He chose a diesel hybrid drive train for the EQ Unimog. That seems to be the best solution, since there are no charging stations in areas where the truck usually goes off-roading. Therefore, a 60-horsepower three-cylinder diesel engine and a 170-horsepower electric motor make up the power plant. A 130-liter tank provides the necessary diesel supply. Meanwhile, a lithium-ion battery with a capacity of 50 kWh provides the necessary electric power. 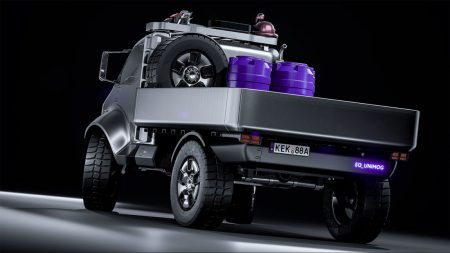 The electrified model features flared fenders that accommodate large wheels. The hinges of the perfectly flat doors are also visible. Up on the roof, there is something that seems to act like a storage tray.

A spacious bed with a fluted floor also holds the spare wheel, mounted on the rear of the cab.

The interior of the Mercedes EQ Unimog

The cabin of the Mercedes EQ Unimog holds the traditional elements. There is a three-spoke steering wheel with an inner layer that plays the part of a shock absorber for the hands of the driver. A free floating digital instrument cluster finds room behind it. 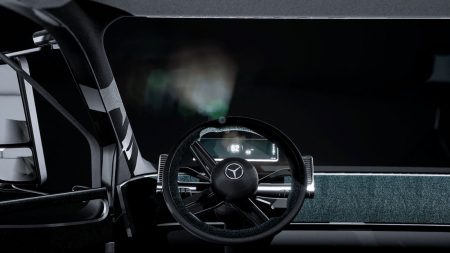 If the Mercedes-Benz Unimog will ever get the EQ logo, remains to be seen. For the moment, the truck remains the workhorse that it has been for ages.