No one would ever dare to doubt the limitless force of the Mercedes-Benz Unimog. It’s that reputation that makes the vehicle very much desired. Even when it is just a miniature.

Rough winter has hit the Europe. Massive snowfalls in countries that haven’t seen any in decades, blizzard, extreme temperatures. All these define the times many Europeans are living right now. All that is combined with occasional power blackouts. But some of them are making the best of it. To clear off the snow, a man from the Czech Republic takes a miniature Unimog for a walk. 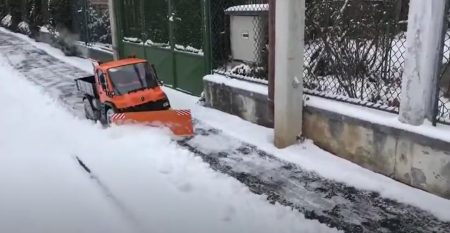 And it is not just a casual walk, but mostly work, actually. That is because the Unimog received a blade that pushes snow away from the sidewalk.

With nothing to compare its size with, you could swear the mini-truck is the real deal. It looks every inch a Unimog. Even the orange color is part of the paint scheme that Mercedes offers for the omnipotent truck.

The vehicle cleared the snow using a snow plow and a gritter. The photos show it working along roads and access routes in Rottach-Egern on the Tegernsee. 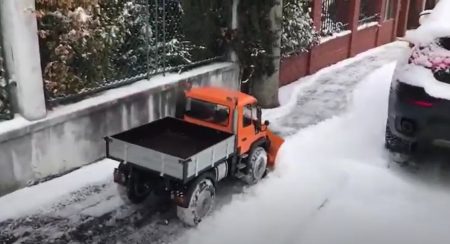 The Unimog must also deal with routs to the ski lifts of the nearby Wallberg mountain. When equipped with special snow chains, it is capable of completing the mission at altitudes of up to 1,000 meters.