This is the BurgerMog, the first-ever foodtruck Unimog

Helsinki, Finland
Elena Luchian, May 5, 2016
2.97K 0
Home Lifestyle This is the BurgerMog, the first-ever foodtruck Unimog

A 400-kilogram oven fitted in a Mercedes-Benz Unimog U 318. This is how entrepreneur Sami Repo of Finland has unconventionally converted the vehicle into a foodtruck.

Partly thanks to its off-road capabilties, the Unimog now serves as a mobile kitchen in the endless Finnish forests. The Unimog attracted Sami Repo as a magnet. He just could not stay away, after having toyed around with a U 20 seven years before.

“It was purely for personal use, but I didn’t really have much of an idea as to what I was going to use the vehicle for!”, he tells. Repo – meaning “Fox” in English – came up with the idea of getting a foodtruck while living in the US. 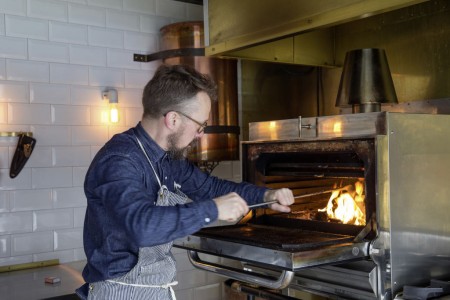 “It was in Austin. The town is like a Mecca for street food. I just had to do something like that.”

And so he did. Specialized in food photography, he thought that was the right thing to do. He bought a standard Unimog U 318 and tailored it to his own specifications.

“I drilled every single hole myself. The truck was everything all rolled into one: a blue print, a test vehicle and even the finished product”, he proudly says.

He even ordered a special barbeque oven from Spain and fitted it into the Unimog’s body. A 400-kilogram piece, together with a wash basin, a gas stove, counters to work on, a copper water boiler and cooking utensils did the job. They turned into a mobile kitchen. Oh, and let’s not forget about the purely Finnish part of it: a school presentation board with pictures of whales on it. Repo fitted old wooden panels on its Unimog that he treated to make them waterproof. The same kind of material used for the sauna infusions in Finland.

Repo now spends about half of the year in Helsinki, about four months in his small town, at an over a century old farm house in Simpele (Eastern Finland) and, every now and then, he flies to US. The flies the truck across the Ocean, too. 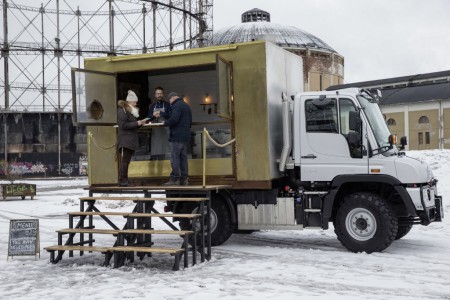 The Unimog is used for company events, public events, birthday party and others. But being an adventurer will probably drag him and his truck into something else.

“A Unimog is a truck for life! I bought the U 318 with all hydraulic connections and many extras. At the moment, I’m dreaming about getting a crane for doing forestry work on my farm. And I also need to build myself a motor home body at some point.”