What will four Mercedes-Benz Unimog trucks do in Mauritius?

Four Mercedes-Benz Unimog trucks have just moved to the small island of Mauritius for an important mission. They must build a tram system.

The construction of a 37-kilometer tram system is not a mission that any vehicle can be capable of. That is exactly why four Mercedes-Benz Unimog trucks have just arrived there. Each of them will be of use as rescue and assistance vehicles on the rails.

The workers there received the U 423 variants. They benefit from the presence of rail technology from the Zagro company of Bad Rappenau, south of Germany. Zagro is an official “Unimog ExpertPartner”. This is a status that is issued for the bodybuilders designed for the fulfillment of especially high criteria in terms of service, quality and technology.

Two Unimog-s come with an elevating work platform. They will operate for the maintenance work on the overhead lines. Other two such models will perform as rescue and assistance vehicles in case of accidents or technical malfunctions.

What is the Mercedes-Benz Unimog U 423?

The Mercedes-Benz Unimog U 423 features  an OM 934 LA 5.1-liter in-line four-cylinder diesel engine. It develops an output of 231 horsepower. The engine delivers output and torque via a transmission with eight forward and six reverse gears. 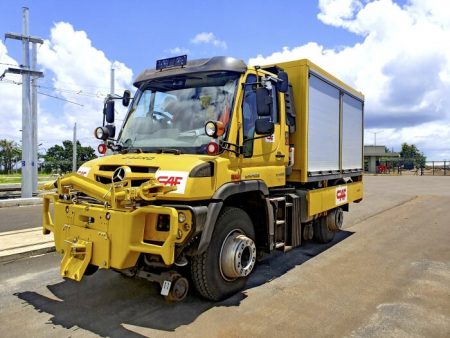 It benefits from a permanent all-wheel drive system, differential locks on the front and rear axles and a torque convertor clutch. Its top speed on the road is of 90 km/h.

Republic of Mauritius is an island nation in the Indian Ocean. To be able to withstand the ever growing number of the population, that now counts approximately 1,26 million people, authorities have decided to build a tramway.

The first section of the tram track has been operating since January 2020. The second section, known as the “Mauritius Metro Express” line is currently under construction. Most likely, it will be ready in the first half of next year.