Mercedes-AMG G 63 versus Ferrari 488 Pista. The drag race that does not make any sense at all

Mercedes-AMG G 63 versus Ferrari 488 Pista. For every petrolhead out there, this drag race just doesn’t make any sense. Still it happened, so we might as well enjoy the absurd competition. Place your bets, ladies and gentlemen!

The Mercedes-AMG G 63, with its 4.0-liter twin-turbo V8, is an off-road expert, as well as a tarmac pro. With 585 PS (577 HP) on tap, it runs from zero to hero (100 km/h or 62 mph) in just 4.9 seconds. The figures won’t match those of the supercars, but they are close enough for a boxy SUV, considering that it screams “anti-aerodynamics” from the top of its… turbochargers. 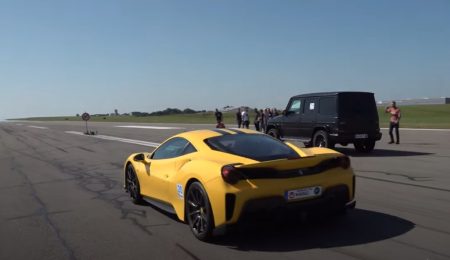 But it is not the usual Mercedes-AMG G 63, since it just rolled out of the PP Performance workshop. It recently received some extra power that took the engine all the way to 900 HP. That is surely quite a boost that changes everything we know about the G 63. And it all shows on the driver’s face, that displays a smile from ear to ear before getting on the starting grip. Will he smile at the end of the drag race as well? That remains to be seen.

Mercedes-AMG G 63 in a drag race against a supercar. How does the off-roader behave?

Right next to it on the drag strip, the Ferrari 488 Pista is ready to fight the German in the 1,000-meter run, starting at 50 km/h (31 mph). The Italian is the proud owner of the highly-acclaimed 3.9-liter twin-turbo V8, generating 720 PS (710 HP). The off-roader in standard configuration would just eat the dust of the exotic supercar that wears a matching exotic black and yellow color combo. But it is so far from standard that… well, no spoilers. Take a look at the video below to find out the result. All we can say is that we expected something totally different from the drag race.