The new Mercedes S-Class W223 promises even more comfort and agility by introducing  E-Active Body Control suspension from the Mercedes GLE/GLS and the rear axle steering.

Mercedes has presented the second episode about the new Mercedes S-Class W223. In the first episode on July 8, we could see how the new MBUX multimedia system works.
Now, Mercedes presents the new dynamic and safety systems offered for the first time at the S-Class.

Rear axle steering is not a novelty in the luxury class being introduced by the BMW 7 Series in 2008. Later the Audi A8 also offered this feature.

In the second case, the turning circle will be only 11 meters for the long-wheelbase version of the new S-Clșass. 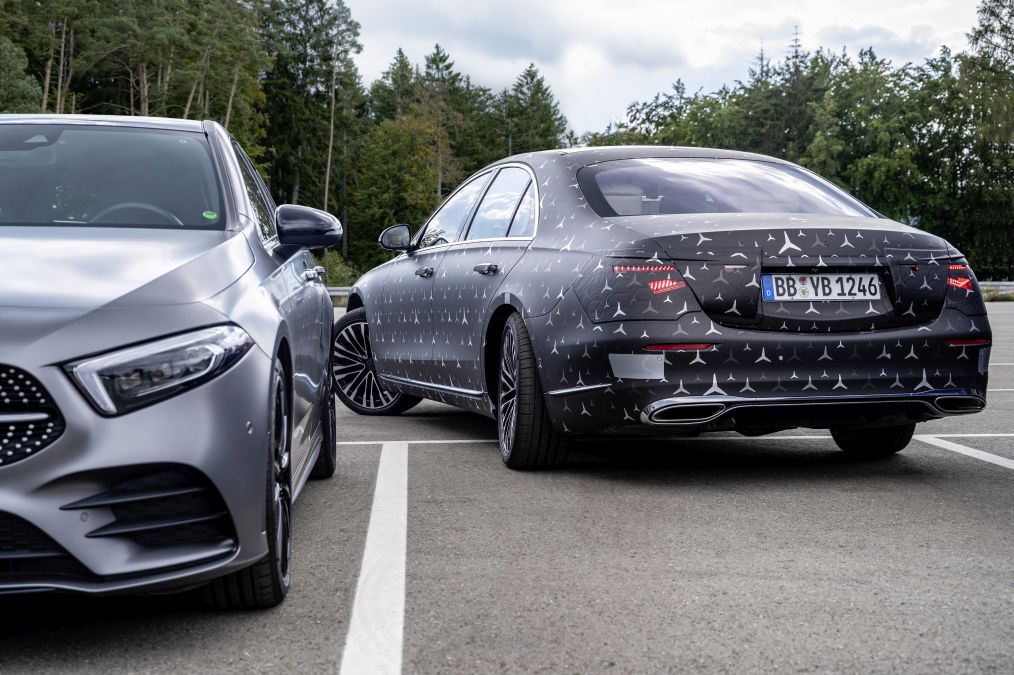 The second big news is the E-Active Body Control suspension taken over from the Mercedes GLE/GLS that regulates the damping and spring forces individually at each wheel, and not only body roll, pitch and lift counters.
In the COMFORT driving mode, ROAD SURFACE SCAN uses the stereo multi-purpose camera (SMPC) to monitor the road surface in front of the vehicle. The spring struts are then actuated to greatly reduce body movements when crossing road bumps
In CURVE driving mode the vehicle actively leans into bends. The leaning function and comfortable suspension setup greatly benefit ride comfort
The damper is connected to an intelligent motor/pump unit in the 48 V network by hydraulic lines.

Frontal airbag for the two passengers on the outer rear seats

PRE SAFE Impulse Side is not the only safe innovation offered by the new Mercedes S-Class W223.
For the first time, the new Mercedes S-Class has front airbags for the two passengers on the outer rear seats.
In some markets there will also be a center airbag in front, located between the driver and the front passenger being integrated in the driver’s seatback in the middle of the vehicle.

Driving Assistance Package has new features:
– The exit warning function now gives a warning as soon as the driver or front passenger reach for the door. This is because the MBUX Interior Assistant recognizes when a hand approaches the door handle.A visual warning is given by a red warning triangle in the exterior mirror and via the active ambient lighting
– Active Steering Assist assists the driver in forming an emergency corridor, and encourages other drivers to form a corridor as well
– Active parking Asssist comes with 12 front and rear sensors with improved performance, a simpler interface integrated in the MBUX system, Emergency braking function when reversing and optional Parking Package with 360 degree camera.