The Mercedes-Benz EQ Silver Arrow 01 is making its debut at the Geneva Motor Show. The racer gets a special “teaser livery” for its first public appearance scheduled for tomorrow morning. The definitive design will be presented at a later stage ahead of the season opener.

The new Mercedes-Benz EQ Silver Arrow 01 will be racing in the 2019/2020 season. “We are looking forward to the challenge of demonstrating the performance of our intelligent battery-electric drives in motorsport and of giving a positive boost to the EQ brand”, says the Mercedes Motorsport team manager, Toto Wolff.

“The Mercedes-Benz EQ Silver Arrow 01 teaser car gives a foretaste of the first all-electric Silver Arrow from Mercedes-Benz,” states Gorden Wagener, Chief Design Officer Daimler AG. “Blue accents and the subtle contrast between matt and gloss in conjunction with the star pattern at the rear of the vehicle stage the progressive luxury in electric motorsport.” 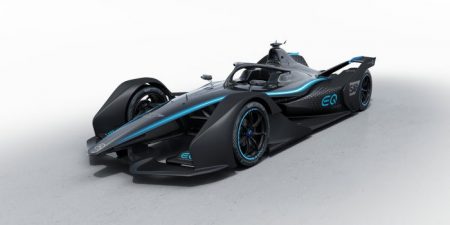 A horizontal blue line, a hint to the EQ brand, runs all the way from the front to the rear on the side of the racing car. The color similar to the PETRONAS green featured by the Mercedes-AMG F1 W10 EQ Power+ in Formula 1, also creates a striking contrast with the dark body of the vehicle. The star motif for the company’s racers shows up at the rear.