It’s been a stormy race in Spa-Francorchamps, as Nico Rosberg won the Belgian Grand Prix and, Lewis Hamilton, leaving from the back of the grid, surprisingly ended third, pulling his aces from his sleeve in a race suspended after a horrific accident. The Mercedes-AMG PETRONAS British driver is keeping his leading position, with Rosberg 10 points behind.

Starting first, Nico Rosberg flew away from the crowd, finally getting a start right. Public danger number one for the Mercedes-AMG PETRONAS driver in Belgium, Max Verstappen failed to get the right trace. 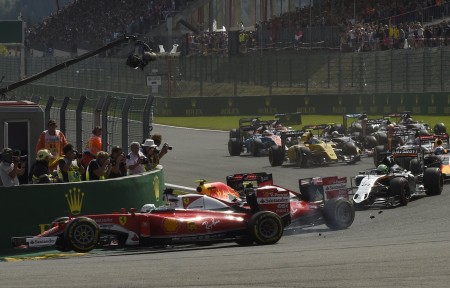 He hit Raikkonen and the Fin hit team mate Vettel, who turned on the racetrack. The Dutch and the Ferrari cars needed to pit to change noses, but the Ferrari mechanics fought to put out the fire that broke underneath the Finn’s car.

In lap 5, there were already 18 seconds between the leader Rosberg and Hamilton. But Kevin Magnussen’s accident turned everything upside down. The Renault driver walked away limping from his car broken into pieces. After four laps of driving behind the Safety Car, all drivers were sent to the pits lane by the red flags, as long as the stewards took to fix the tire barrier.

Rosberg was a bag of nerves. When the race was suspended, Hamilton was already on the fifth spot. Verstappen went straight to the pitwall to cry on Christian’s Horner’s shoulder. The Red Bull boss explained that the Ferrari drivers are not to blame for the incident in La Source.

Something hilarious was happening during the break. In the world’s most technologized and most expensive sport, the Ferrari mechanics were sticking duct tape on Vettel’s car to fix it. 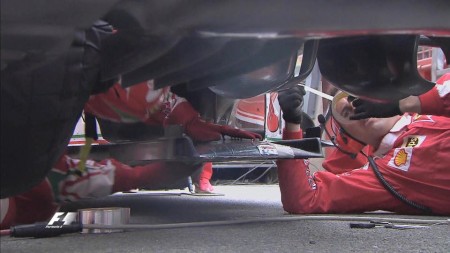 17 minutes after being redflagged, the drivers were on, to race again. Hamilton was inching closer to leader Rosberg. At the back, Iceman Raikkonen was fuming. Verstappen got the best of him, moving right and left in front. 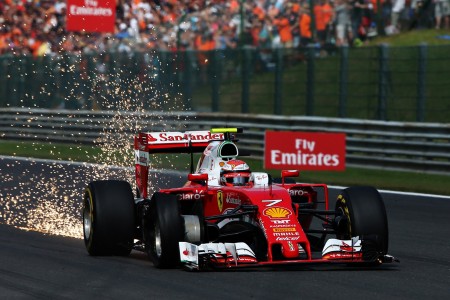 Hamilton made his way past Hulkenberg. “Nice work – he heard from the engineers – you still got Ricicardo!” But the Aussie was 6 seconds ahead. Had the Brit come far already: 18 places earned from the start.

In the Le Combe, Raikkonen banged wheels with Grojean. Kimi finally managed to blast past the Haas car and advance to P12.

Hamilton pitted, so his strategy was now obvious. 22 laps to the end, the Brit woud need to change tires again. He went back out in the 9th spot. The TV replay showed major error during the change, as his car was still lifted even though he was good to go.

The strategy drawn out for Lewis also changed Nico’s as well. “We go to plan B, Nico”, he was told and advised to push, as there was absolutely no need to preserve tires. 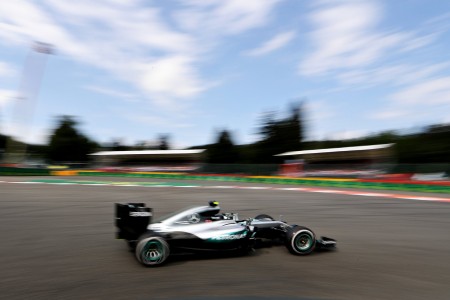 Vettel swung past Verstappen, after the teenager danced in front of him as well. The Dutch and the German exchanged positions again and again, with the Ferrari driver finally showing the kid who had a few world drivers’ titles in his CV.

And speaking of world champions, the current one pitted again and went back out on used medium tires, the ones used in the quali session and in the beginning of the race. “I am not sure this is a good idea”, he told the team. Hamilton easily made a move on Hulkenberg and overtook him. Similar move for Vettel, who got past Massa to reach P7.

So Nico Rosberg gets his first ever victory in Spa, followed by Daniel Ricciardo and teammate Lewis Hamilton. The Aussie shocks again on the podium, offering interviewer Mark Webber champagne from his shoe. 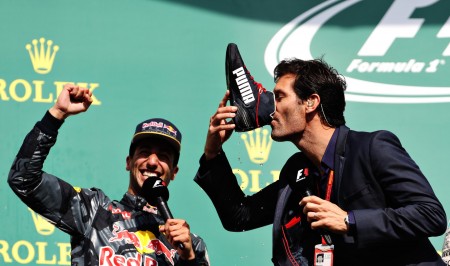 Lewis Hamilton is first in the worl ranking, while teammate Nico Rosberg is 10 points behind. The Belgian Grand Prix is over, Monza comes next in only a week from now!