After Mercedes-Benz released official information and pictures showing the new GLE Coupe, a lot of media voices rightfully touted the SUV-coupe as the long-awaited rival of the BMW X6. Let’s see how the two models perform against each other, on paper.

Only six months after BMW presented the new X6, Mercedes-Benz is trying to close the gap and secure a spot in the sports SUV-coupe segment with the brand new Mercedes GLE Coupe. And since a head-to-head comparison on the road is out of discussion at this particular time, we wanted to see how does the Mercedes GLE Coupe intend to challenge its competitor, the BMW X6.

First things first, so let’s see where the two models stand in terms of design. Basically, both models borrow coupe-like styling cues and combine them with crossover-esque characteristics. It was BMW who first explored the possibilities in the SUV-coupe (or SAC – Sports Activity Coupe, if you prefer) niche, so there is no wonder that, at a first glance, the Mercedes GLE Coupe resembles its Bavarian counterpart in terms of design lines and proportions. 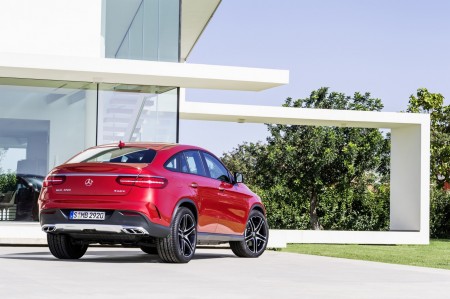 However, it is safe and fair to say that the GLE Coupe tends to focus more on elegance and sleek lines with a drop or two of dynamism, while the BMW X6 displays a sportier, sharper and, overall, more aggressive look. Any other comments on how the two cars look are only a matter of taste, so we’ll leave you with the two photo galleries above in order to form an opinion.

As we move on towards the interior, the differences in design phylosophies become clearer and clearer. On one hand, the BMW X6 gets a lot of inspiration from his peer, the BMW X5 (and by a lot of inspiration we mean the sports steering, gear selector, and individual back seats, plus other design cues), meaning that the cockpit gets the popular BMW signature in terms of mixing the premium feel with a sporty ambience.

On the other hand, the Mercedes GLE Coupe is obviously more focused on confort and passenger space, which keeps it in line with the standard of luxury and aesthetics we are used to receive from Mercedes-Benz. The seats are offered with a high-quality synthetic leather upholstery, while the central console takes its looks from both the C-Class and the S-Class. Moreover, Mercedes insists that the GLE Coupe is more practical than the BMW X6. But we’ll just have to put that to the test to believe it.

For the X6, the BMW EfficientDynamics technology is offered as standard and, as well as the COMFORT, SPORT and SPORT+ settings, the driver can select and activate the ECO PRO mode. In addition, the BMW X6 also comprises several aditional functions, such as Auto Start Stop function, Brake Energy Regeneration, active air flap control and Dynamic Performance Control with torque vectoring.

In response, the GLE Coupe is equipped with the Dynamic Select system which enables the driver to choose from five settings: INDIVIDUAL, COMFORT, SLIPPERY, SPORT and SPORT +. Among other technological goodies, the GLE Coupe uses an Active Curve System with active roll stabilization (similar to the ones implemented on the BMW X5 and the Porsche Cayenne). The AGILITY CONTROL suspension sistem comes as standard, while the AIRMATIC with ADS Plus suspension is optional.

Safety is one aspect taken very seriously by both Mercedes-Benz and BMW and this is quite obvious from the amout of life-saving technology each manufacturer has implemented into their cars. The BMW X6 comes with adaptive LED headlights, Head-Up Display, Driving Assistant Plus with Traffic Jam Assistant, Parking Assistant, Surround View and Night Vision with Dynamic Light Spot and Speed Limit info.

In that respect, the Mercedes GLE Coupe comes with COLLISION PREVENTION ASSIST PLUS, DISTRONIC PLUS with Steering Assist and Stop & Go Pilot, PRE-SAFE Brake with pedestrian detection function, BAS PLUS with Cross-Traffic assist, Active Blind Spot Assist and PRE SAFE Plus.

Until we will actually get the chance to test the new GLE Coupe and the X6 head-to-head, tell us if we missed anything by writing your comments in the dedicated section below.