A Mercedes-Benz 380 SL Roadster from 1981 crosses the auction block next month, during the Barrett-Jackson sales event in Las Vegas. The car looks spectacular.

Forty years ago, when it rolled off the assembly line, this Mercedes-Benz 380 SL Roadster it looked more ordinary. But it lost the “ordinary” somewhere along the way. Long Island coachbuilder worked on it and modified it comprehensively, in collaboration with artisan Niko Sokol through his company Niko-Michael Coachworks.

New headlights now adorn the front fascia. The three-pointed star logo in the center of the radiator grille draws attention with its gold finish. And yes, it is plated in real gold! These are far from being the only tweaks on the car. 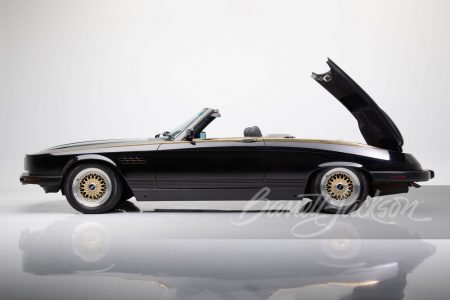 The 380 SL Roadster got a completely new curvaceous body. A new removable hardtop with a manual retracting system showed up. Because they redesigned the retractable roof, the engineers were also able to relocate the spare wheel. It is now in sight, on the rear decklid. Cooling vents now split open the front wings.

Gold-plated accents on the wings and upper body line match the brand’s logo at the front and the 16-inc wheels from BBS. Don’t even ask. Of course it’s real gold-plated as well.

The Mercedes-Benz 380 SL Roadster comes with the celebrity factor

The listing mentions no modification on the interior. The 3.8-liter fuel-injection V8 is also intact, mated to a four-speed automatic transmission.

The automobile comes with the celebrity factor. Somewhere along the way, the 380 SL Roadster got in the possession of singer Wayne Newton, the one who reached Number 4 at Hot 100 with his hit “Daddy, Don’t You Walk So Fast”. The model spent most of its life in the singer’s cars collection garage. The odometer shows only 2,000 miles. That is really something for a 40-year old Mercedes-Benz 380 SL Roadster.