Jaguar has been lying dormant for quite some time but it looks like it says it is now ready to tackle the big names in the segment. Bold claims. We’ll just have to wait and see if they are also in any way realistic.

Jaguar is looking to build on the momentum created by the XE launch (shown in picture) with the announcement of their new executive saloon. The schedule of the future Jaguar XF sets its first appearance for the New Your Motor Show in April next year, with sales beginning in early autumn.

According to an inside source quoted by the British magazine Autocar, Jaguar is faced with a brand identity problem: Jaguar models aren’t recognised quickly enough on the road in emerging markets, where Jaguar doesn’t have such strong history.

If we’re to draw conclusions based on what we know so far, this problem seems to be addressed the Audi way: make all models identical in shape and design, with size being the only difference. The same unnamed source has confirmed the Jaguar XF will get a scaled up version of XE’s radiator grille and, probably, its headlights also. It’s as if they put the design in Photoshop and simply pulled one of the corners while holding down the Shift key. 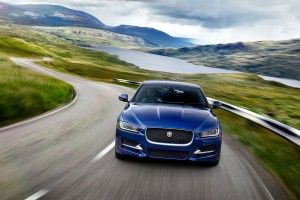 One of the key features of the Jaguar range, however, is their scalable aluminium platform (named iQ[AI]. The new XF is expected to be slightly larger than the outgoing model (in order to resolve the leg room and boot space situation on the previous car), and yet it promises to be 100 kg lighter. The current car is some 50 kg heavier than its main rivals from Mercedes-Benz, BMW or Audi.

Jaguar is said to be very keen to capitalise on this newly gained lightness of their vehicles, considering the option of positioning all their models as the sportiest choice in each segment. This, again, would be a bold move, one that would have to be backed by a series of powerful cars like the XFR or the XFR-S.

The XF Sportbrake is expected to continue production in its current form for at least two more years, when it will finally be replaced by a new model.

Jaguar has big plans and, if all goes as planned, it could shape up into a serious competitor in the premium brands market. While this is neither good, nor bad news for the other three main brands occupying the segment, a more fierce competition can only mean more options and better end results for the customers.