BMW seem keen on maintaining their recent affair with front-wheel drive models as a new 2 Series model believed to be named Family Tourer was spied again during testing.

In case you thought BMW is done with front-wheel drive platforms for now, better think again. Besides the 2 Series Active Tourer, BMW is preparing another model which will use the same platform but will offer more space in the back.

Rumors say that the 7-seater version of the Active Tourer will be called the 2 Series Family Tourer. The spy-shots suggest that the model will have two extra seats in the back but these solution is unlikely to accomodate two grown-ups and looks rather destined for children instead of adults. 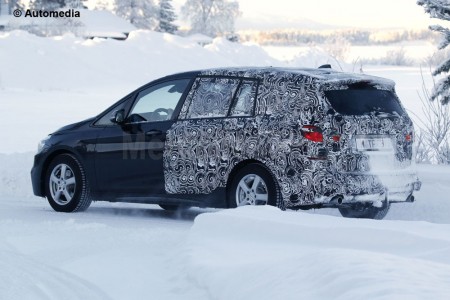 There are no visible changes in terms of design, except from a slightly longer and taller rear end. It is believed that the same engine range will be adopted by the Family Tourer, including the 1.5-litre 3-cylinder turbocharged petrol and diesel units and the range-topping 2.0-litre 231 hp and 350 Nm engine powering the 225i version.

Since the focus will most likely be set on practicality, we should expect plenty of storage spaces and lots of room for carrying all sorts of luggage.