A 45 AMG burned to the ground

When we said that the Mercedes A 45 AMG Edition 1 was a fireball, that is not exactly what we meant. An A 45 AMG has been involved in a horrific crash in Israel and after the collision, the car burned down to the ground, but the driver came out of it alive.

The car is considered to be amazing, but it needs a hard-headed driver behind the wheel. When the driver tries to overtake another vehicle in a roundabout, while he speeds by 180 km/h, we can call him anything but that.

He lost control of his A 45 AMG and the car left the road, hitting the guardrail and bursting into flames. According to the witnesses, the driver managed to get away before his vehicle was turned into ashes. 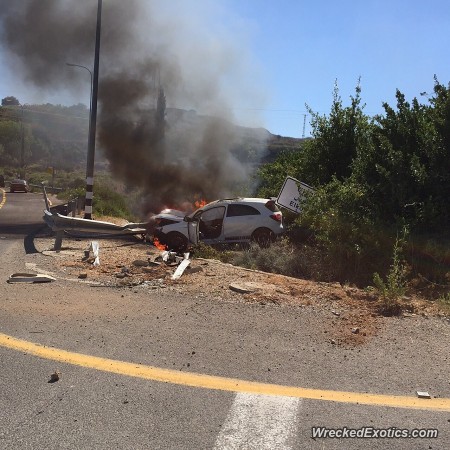 We can only say: rest in peace, Mercedes A 45 AMG Edition 1 . Hope you had an accomplished life on the road. Unfortunately, cars can’t choose drivers.

The A 45 AMG involved in the crash is one of the vehicles offered by Mercedes in the first 12 months since its market launch. All cars came with a Cirrus White paint combined with matte graphite grey stripes placed on the roof, hood and sides. Body wise, a rear wing, larger front splitter, red accents on the front grille, brake calipers, side mirror caps and rear wing are distinctive for the Edition 1 models.

All featured a 2.0-liter turbocharged four-cylinder engine, rated at 355 HP and 450 Nm of torque. These figures guarantee the Mercedes hot hatch a run from standstill to 100 km/h in just 4.6 seconds. 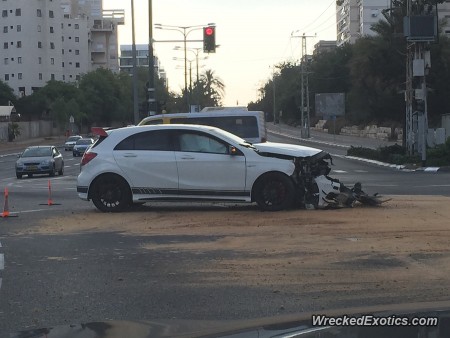 Just two weeks before this crash, another A 45 AMG Edition 1 had been messed up in an accident that also happened in Israel. The Mercedes was hit by a taxi running the red light in a junction in Tel Aviv. The driver was not physically affected by the collision.