The Transformer – The Mercedes-Benz IAA Concept revealed in Frankfurt

The Mercedes-Benz IAA Concept is two cars in one! One that alters shape and function when reaching 80 km/h. The holder of the world record drag coefficient – just 0.19 – has just been officially revealed tonight in Frankfurt.

For Mercedes-Benz, the Frankfurt Auto Show started with an innovative 3D show depicting the cutting-edge technology of the near future. In the acoustic tones of the techno music, the Mercedes-Benz Intelligent Aerodynamic Automobile took center stage and awed the audience.

At the speed of 80 km/h, or sooner, at the touch of a button, the study vehicle automatically switches from design mode to aerodynamic mode, therefore a wide range of features will alter the shape of the car, turning it into the world champion of aerodynamics: eight segments will extend the car by 25 mm at the front and 20 mm at the rear, to improve the airflow. As the speed grows, the Active Rims will modify their cupping from 55 mm to zero, becoming flat, perfectly aerodynamic disk wheels, while the louvre in the front bumper will automatically move toward the rear by 60 mm. 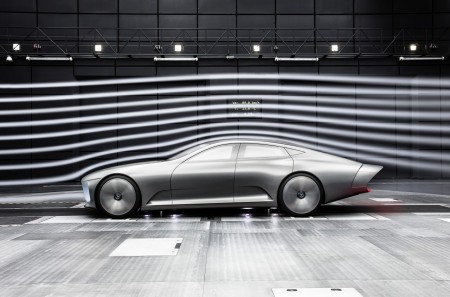 “Fascinating and technically sophisticated cars form the core of Mercedes-Benz. The ‘Concept IAA’ applies intelligent innovations to resolve the conflicting aims of functionality and aesthetics and shows that we still have plenty of ideas on how to achieve further improvements in efficiency”, says Prof. Dr. Thomas Weber, Member of the Daimler Board of Management responsible for Group Research and Head of Mercedes-Benz Cars Development.

On the outside, the four-door ‘Concept IAA’ Coupé Saloon is an exquisite mix of design and aerodynamics. The vehicle comes with classic sports car proportions displayed in a futuristic approach: the long bonnet flows aerodynamically into the compact greenhouse, with a glass roof sloping down towards the rear. 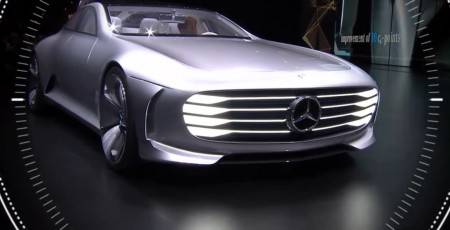 The sporty, minimalist front of the show car brings the already familiar the striking ‘shark nose’ profile, similar to that of the F015 Luxury in Motion. The transition of the louvres into horizontal LED headlamp elements underscores the vehicles powerful, yet sensual and technoid appearance.

Not only do the vertical aero flaps look spectacular, but they are also perfectly functional. They can extend to the sides for a superior air flow. During extension, when switching over to aerodynamic mode, the edges of the wings light up in blue.

Replacing the traditional door openers, pulsating blue LEDs indicate where the touchpad to open the doors is located. A tap of the finger, like that operating your smartphone, will automatically open the doors.

The tail lights are a stand-out feature just as much, with a look of stardust or the glow of a jet engine. Mercedes-Benz promises that the ‘stardust look’ lights will make their debut in a series-produced model at the beginning of 2016.

The interior of the ‘Concept IAA’ combines stylish sportiness with modern luxury. The choice of colours and materials strongly relies on contrasting combos of anthracite and white, as well as between aluminium and cut glass.

The instrument cluster consists of two 12.3-inch screens positioned alongside one another. The displays are mounted behind glass.

The concept car is propelled by a petrol engine combined with an electric one, summing up the plug-in hybrid technology with a total output of 205 kW (279 HP). This guarantees an electronically limited top speed of 250 km/h.

When it comes to the interior of the study vehicle, the designers have put a holistic touch: it perfectly mimics the design language of the exterior, with white and anthracite as high-tech basic colours. Seamlessly merging into the doors, the instrument panel completes the wrap-around design. 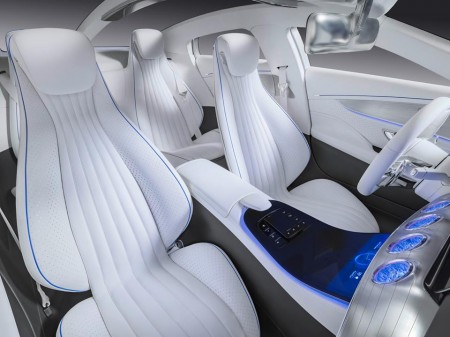 To add some luxury to an already exquisite vehicle, the eight air vents have been produced by Swarovski on commission by Mercedes-Benz. They are discretely pointed out by ambient lighting in a thrilling combination of blue and red.

Whether the IAA Concept is destined for showrooms or just showstands, we’ll live and see. For now, let’s just enjoy the ride into the future.