Plans made – These are the Mercedes-Benz premieres for next year

Elena Luchian, October 30, 2018
2.2K 0
Home Auto news Plans made – These are the Mercedes-Benz premieres for next year

The dice are cast for 2019. Mercedes-Benz has set out the strategy for the upcoming year. So here are the Mercedes-Benz premieres set to see the light of day in the product offensive set off by the premium car maker.

We have already seen the newly introduced B-Class, the first member of the EQ family, the EQC, and the eSprinter electric van, with all of them programed to arrive in showrooms across the world in 2019. New arrivals are also on the way, as the next-generation CLA and CLA Shooting Brake, already undergoing tests, now covered by tarpaulins in the photographic representation of the strategy, will make their way onto the market.

The plan includes a new GLC, together with its coupe counterpart, as they are set to go through a mid-cycle update in 2019. The GLS SUV flagship is also part of next year’s strategy, as Mercedes is planning to give a refreshed styling and technology, in the attempt to make it capable of fighting the recently presented BMW X7. 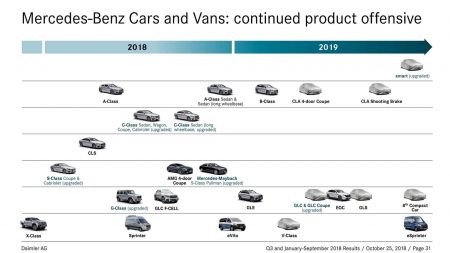 The list also highlights the presence of an “8th Compact Car” and it is most likely to be a reference to the GLB, recently caught testing. The GLB is set to be a boxy crossover, that will borrow the G-Class design, but will be more of a GLK-like vehicle.

The V-Class is also planned for 2019 in its facelifted variant, four years after the new generation was launched.

The great absent of the list is the new GLA, which means that it will take Mercedes some time before it releases its entry-level crossover.

The smart brand is also present in the plan, with the mention “upgraded”, set to make an appearance towards the end of the year. The tiniest of the company’s range will transform into an electric brand in Europe by 2020.