The Pope trades his Mercedes Popemobile for a Hyundai

Pope Francis got himself a new set of wheels. And even though the Mercedes customized cars have been the official vehicles for Vatican for twenty years, he now switched to a Hyundai Santa Fe.

The popes have sailed through the crowds in heavily tweaked Mercedes-Benz vehicles, most of them being bullet proof cars. But Pope Francis believes those are too good and too safe for him. Therefore, a Hyundai Santa Fe has been modified in order to serve the holy duty. The roof was cut off behind the front seats. The customized Hyundai also features a retractable step and several stabilizer bars for the holy figure to hold onto while the car is in motion. 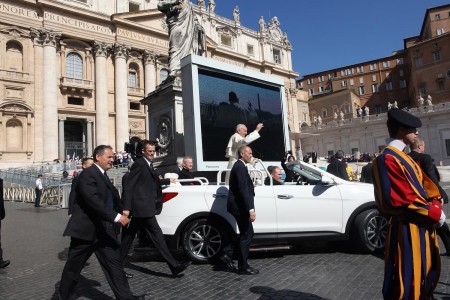 And to surprise people even more, Pope Francis decided to give up on the bullet proof glass, a characteristic that had been introduced soon after the attempted assassination of John Paul II in 1981. Pope Benedict, Francis’s predecessor, also favored such features in his greetings vehicles.

“I remember in Brazil – says Pope Francis – they provided for me an enclosed Popemobile, but I cannot greet the people and tell them I love them inside a sardine can, even if it is made of glass. For me, it is a wall.” 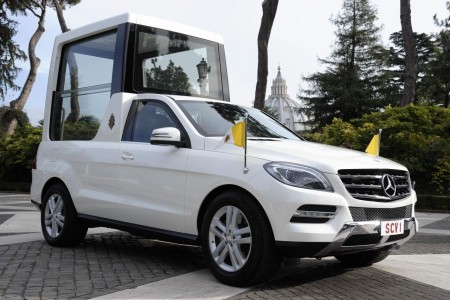 Now that he lacks protection in his parade car, His Holiness has no wall between him and the people.

Well known for his sense of humour, the Pope says that, at his age, he does not have much to lose in case anything happens. But he seems young at heart, so we would suggest an A-Class to His Grace, maybe? Or if he favors the SUVs, the brand-new GLC is soon coming out. 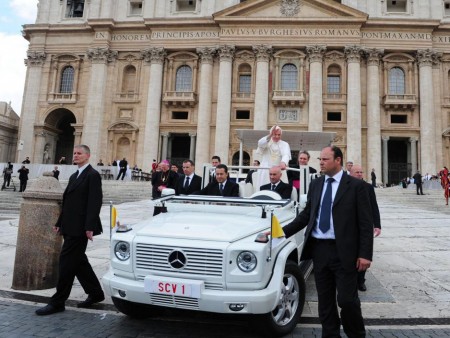 An M-Class, a G-Class and naturally, an S-Class, have always been in the garage at Vatican.  Just in case the Pope changes his mind and goes premium back again.