The Surfboard by Mercedes-Benz – It Takes Your Breath Away

The Mercedes-Benz surfboard
Elena Luchian, January 7, 2015
3.47K 0
Home Lifestyle The Surfboard by Mercedes-Benz – It Takes Your Breath Away

It is breathtaking! That is how the Hawaiian surfer Garrett McNamare defines pure adrenaline. The Mercedes ambassador ride the new Mercedes super flex Varial airplane wing foam surfboard. So hold your breath. Nobody can guarantee floating.

This makes the viewers hyperventilate. The Hawaiian daredevil considers it pointless to speak of limits. He has blown them out a long time ago. All wheel drive? Huge output? Wide wheels? They are so much of nothing out there, where the wave rider is fleeing from the 20-meter water monster.

“You do not fight to survive. Actually, you learn to relax in order to survive. You just go along with it and enjoy it. That is how you overcome fear”, he says. 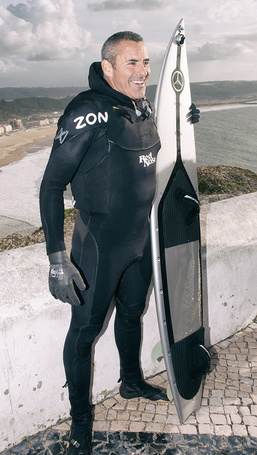 To master the monster, you need to be fit, to think straight and to have the right board. Especially designed for extreme rides and tested in the most scandalous marine conditions, the Mercedes foam surfboard kept Garrett McNamara floating in Nazare, Portugal, a place known worldwide for its huge waves adored by surfers. For this reason only, that was the spot that McNamara chose for his 2012 wedding to an environmental sciences teacher, Nicole.

As the right man in the right place, for the encounter with the liquid giant, Garrett McNamara still holds the record he set off in November 2011. A 24-meter wave, the highest ever to have been surfed. “It all starts with the wind.”, he says, while observing the speed and direction of the blow on the shore, face to face with the XXL waves.

Varial, a company founded by Edison Conner and Parker Borneman, claims that the foam is “not a variation of polyurethane or expanded polystyrene. It’s an advanced aerospace formula.” It provides 20% more strength, 25% less weight, and eliminates the need of a stringer.

The Mercedes-Benz surfboard, built in Portugal and tailor-made for his height and weight, surfed by the wave rider, reached the record speed of 62.4 km/h. The speed was registered by the help of a telemetry system especially built by Mercedes-Benz for this project.