Mercedes G-Class: 35 Years on the Rocks

Already 35 years gone since the Mercedes G-Class began its career! Time seems to go by “just like this”, when you feel safe and strong. Proof that the German 4×4 is an outstanding technical achievement: its production continues nowadays.

35 years after after its debut in 1979, the Mercedes G-Class is still praised as a very solid value of the off-roader’s kind. By the way, do you remember the guy who took one of those cars and started to drive around the world? Ok, this happened some 26 years ago. His name is Guther Holtorf and, by the way, he just came back to Swabia.

The sky-blue Mercedes 300GD nicknamed “Otto” reached back home in quite good condition after 215 visited contries and some 890.000 km.

Anyway, funny idea, to give the name “Otto” to a Diesel-engined car (5 cylinders in line, 3,0 litre). Guther Holtorf began his epic drive together with his third wife, but they broke up in 1990, while driving through Africa. 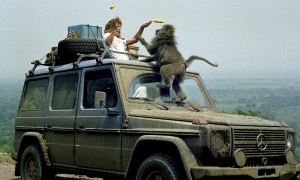 After this, Gunther placed an ad in the “Die Zeit” newspaper and met Christine. Crew completed, the Mercedes G-Class “Otto” resumed its trip, heading to South America. During the next years, “Otto” visited many exotic locations, like Cuba, Mexico, Canada, Alaska, Australia, Afghanistan, Kazakhstan, Syria and some European countries. Unhappily, Christine passed away in June 2010 (she was diagnosed with a malign tumor in 2003). 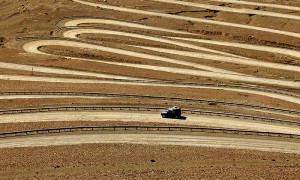 As he had promised to her, Gunther continued the trip across North Korea, China, Cambodia, Vietnam and more. The final destination was the Brandenburg Gate, from Berlin and “Otto” brought his owner (now, aged 77) safely there. The Mercedes 300GD rarely manifested any functional caprice while travelling for more than a quarter of a century around the world and the original engine is still there, under the bonnet.

Starting with the 21st of October 2014, “Otto” will be displayed in the Classic section of the Mercedes-Benz Museum in Stuttgart-Untertürkheim and its exceptional achievement will be mentioned in the famous Guinness World Records book. 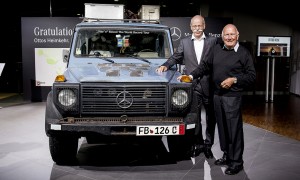 Certainly, this is a wonderful present for the 35th anniversary of the Mercedes G-Class, but it is not the only one. Along comes the launch of the limited series G 350 BlueTEC Edition 35 and G 500 Edition 35.