Lewis Hamilton wins his second world championship after an intense duel with his team-mate, Nico Rosberg. He is the first Mercedes-Benz world champion after Juan Manuel Fangio.

The title deciding race of the year was run under the artificial lights of Yas Marina track from Abu Dhabi. The tense moments before the crowning of a new world champion are highlighted by a number of important events that will have an impact on the next season of Formula 1. Sebastian Vettel will compete in his final race for Red Bull, the team that has brought him no less than 4 drivers’ titles, as he will replace Fernando Alonso at Ferrari. The Spaniard took the decision of changing the team after a few seasons when the Scuderia couldn’t provide him a car that is able to compete at a much higher level. Alonso signed with McLaren for one year, but it is still unknown who will be his team-mate. If the Woking team decides that they will need the young Kevin Magnussen, the Abu Dhabi round could be the last one for  Jenson Button.

Nico Rosberg was the one taking the pole-position, while Hamilton made a few mistakes under the obvious pressure of the result. These errors threw him back 4 tenths behind his Mercedes team-mate. Valtteri Bottas was close to step in, but, at the end, the third place had to be satisfying enough for him, one step ahead of his team-mate from Williams, Felipe Massa. In his last race for Red Bull, Vettel was overtaken by Daniel Ricciardo, and at the end of the qualifying rounds both of them were placed on the fifth and sixth spots. However, irregularities were found after the technical inspections at the front wing of the two Red Bull cars, and the penalty forced them to start from the pit lane. The top ten was completed by Daniil Kvyat, Jenson Button and the two Ferrari drivers, Kimi Raikkonen and Fernando Alonso, while Magnussen and Vergne took advantage of the penalty applied for the Red Bull team as they climbed on the ninth and tenth spots.

The race for the title

Once again, Lewis Hamilton proves to be more aggresive at the start and manages to overtake Rosberg. The Brit reacted lightning-fast after the lights turned off, as he disengaged the clutch within 0.2 seconds. His brilliant start gave him a four car lenghts advantage right from the first corner, as Rosberg had to defend his position from the attacks of Bottas. 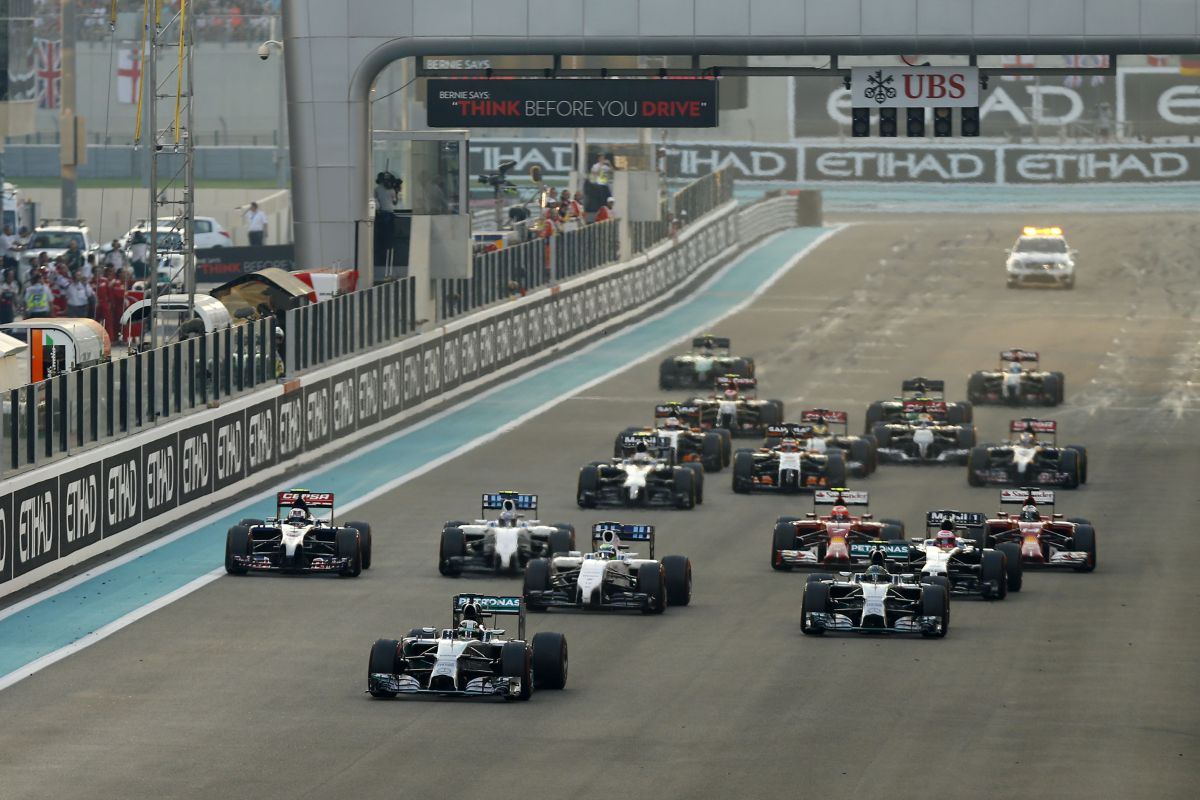 The Finn drops to the eighth place even from the first lap, after some clinches in the squad. Hamilton imposes his pace and manages to tail away three seconds ahead of Rosberg, while maintaining his advantage after the first pit stop. The German manages to approach his title rival, but disaster strikes in the 25th lap. After the energy recovery system failed, Nico sees himself forced to limit the damages, while continuing to crave for the title, even though he loses no less than 160 HP of his car’s overall power. Even thogh he gives away position after position, he desperately asks for advice from his team, but nothing can be done anymore. The system can’t be fixed anymore and Rosberg finishes on the race track and not at the pit stops as the team asked. This was a true dignity gesture done by the great drivers who are aware of the importance of knowing how to lose. 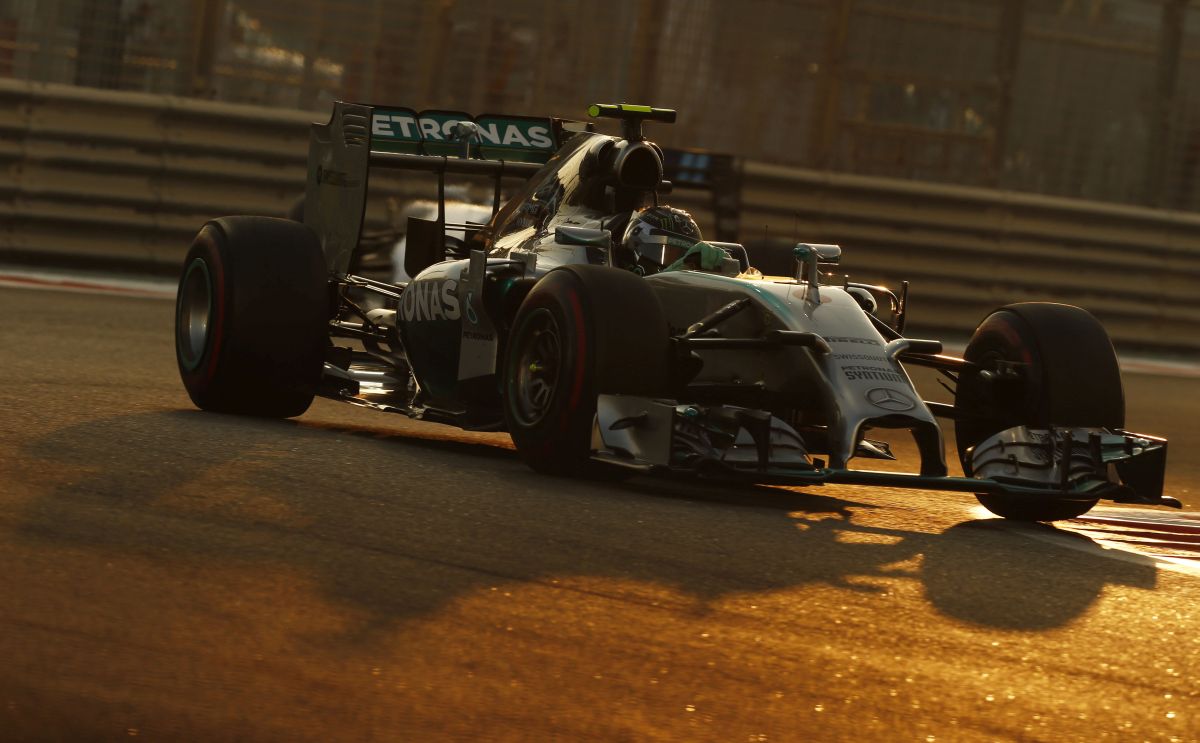 With a clear path to the second world champion title, Hamilton races with a constant pace, more than enough to secure him the first position of the podium, two seconds ahead of Felipe Massa. The Brazillian from Williams followed a strategy with three pit stops, while fitting the super soft tire set at the end, hoping to steal the victory from Lewis, but the Brit proved to be invincible and finished the race as a true champion.

Valtteri Bottas completed the podium despite an error from the first lap, a well-known place for him in this season. Daniel Ricciardo also had a very good race, as he managed to finish in the fourth spot, after he saw himself forced to start from the pit lane. Jenson Button was the one to follow, as he succeeded in keeping the Force India drivers behind him, Nico Hulkenberg and Sergio Perez. The former world champion, Sebastian Vettel finished on the eighth place, ahead of the Ferrari drivers who got the last points available. Three drivers had to retire from the race, Kobayashi due to some massive vibrations, Maldonado’s Lotus caught fire and Daniil Kvyat retired because of engine failure. 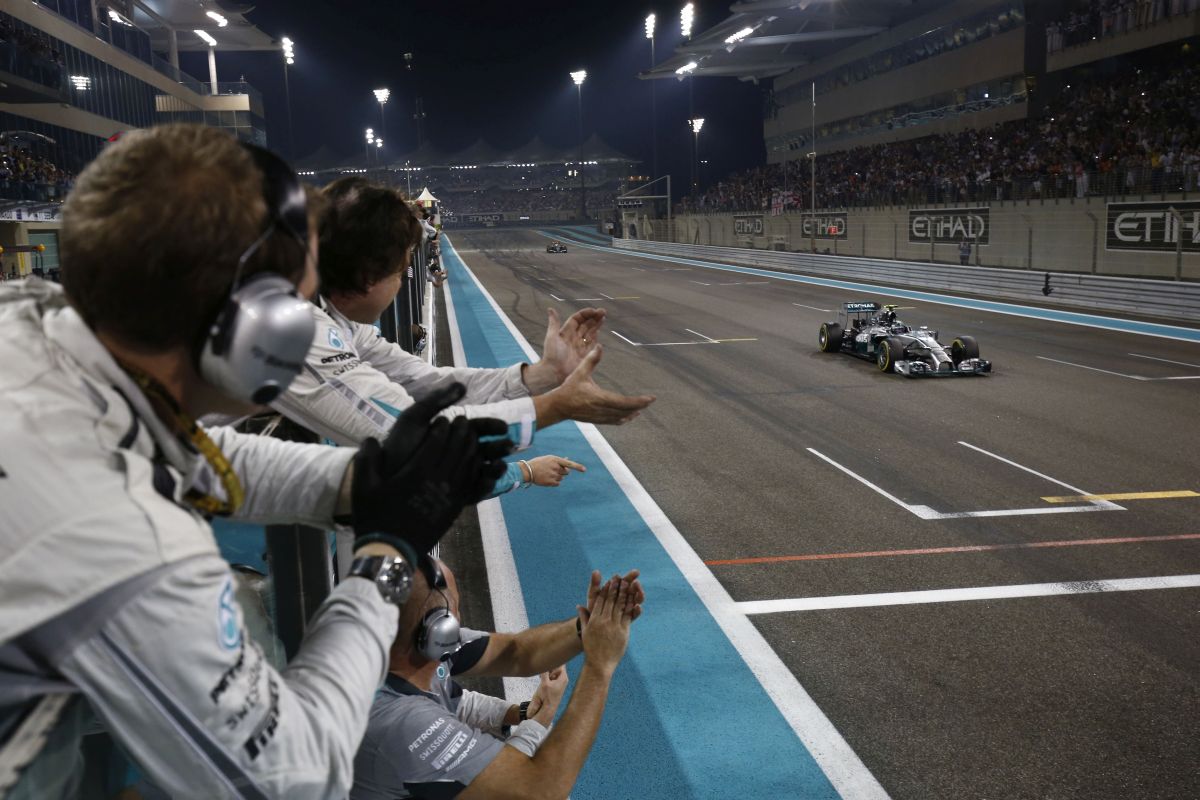 While Lewis Hamilton joins the high-end club of double world champions such as Graham Hill,Jim Clark, Alberto Ascari or Emerson Fittipaldi, the 2014 Formula 1 season comes to an end. Even though critics questioned the excitment in the new era of 1.6 turbo engines, the intense duel between Rosberg and Hamilton proved quite the opposite. If the cars are not spectacular enough, there will always be drivers who are willing to risk it all in order to become world champions. They are, of course, the best in the world.