Drama in Barcelona for Mercedes-AMG PETRONAS! Both drivers out after start

Elena Luchian, May 15, 2016
1.36K 0
Home Motosport F1 Drama in Barcelona for Mercedes-AMG PETRONAS! Both drivers out after start

The Spain Grand Prix ended before it began for the Mercedes-AMG PETRONAS racing cars and drivers. Starting from the first and second positions on the grid, Lewis Hamilton and Nico Rosberg were out after just three turns after colliding.

It was the world champion Lewis Hamilton who rushed to the lead with a very good start. Inches away, Nico Rosberg tried to get in front and managed to do it on the exterior of the very first corner. Hamilton could not leave with it, tried to snatch his position back, but, squeezed by Rosberg, he went straight into the gravel, lost control and, during the spin, dragged his teammate and rival, Robserg, after him. The race finished for the two Mercedes-AMG cars and drama began! 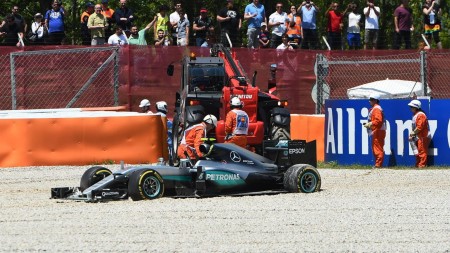 Both drivers apologized to the team, but refused to take the blame for the collision that left Mercedes-AMG PETRONAS with no points in Barcelona!
“It was my race to win – I was here to win, that’s what I was looking forward. So for us to end in the sandtrap like that – it is as bad as it gets”, said Rosberg. 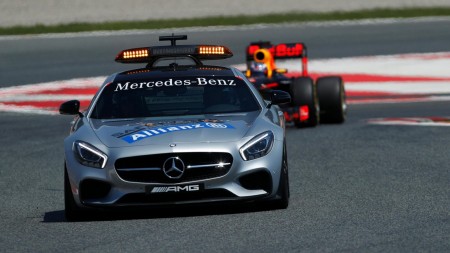 “When I stopped, my heart just sank. I had a good start, but Rosberg slipstreamed me into Turn 1. Then through Turn 3 he had a d-rate – basically he made a mistake and started in the wrong engine setting. We only have one setting for maximum power and he wasn’t in it, which meant he was like 180bhp down. I’m not getting into blame, just a huge apology to the team. I’ll do everything I can to make sure it doesn’t happen again.”

Despite the retirement, Rosberg keeps his lead in the general ranking and Hamilton drops to third, 43 points behind the German.

Once the Mercedes racing cars were out, the Red Bull and Ferrari drivers had their own party in Barcelona. 18-year old Max Verstappen got his first Formula 1 victory ever, becoming the youngest F1 winner. Kimi Raikkonen followed him a bit more than half a second behind. The second Ferrari, Vettel’s, finished third.