Mercedes-AMG Motorsport PETRONAS didn’t even dare dream about such a finish, after starting from P3 and P9 on the grid of the Bahrain Grand Prix. With Lewis Hamilton penalized for gear box change, Mercedes managed to snatch the second and the third position at the end of the season’s second race.

Ferrari’s Sebastian Vettel achieved his 49th win in his 200th Grand Prix, joining an exclusive club where only Michael Schumacher, Nico Rosberg, Lewis Hamilton and Jenson Button were. The German controlled the proceedings from start to finish, with a little scare for the last three laps, when the Mercedes driver, Valtteri Bottas was closing in on him. Vettel’s tires were worn out, because he couldn’t change them due to an incident involving Kimi Raikkonen. The Finn’s car was released before a mechanic managed to fit his rear right tire. The mechanic suffered a double bone fracture. 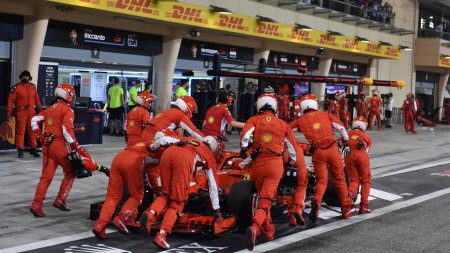 It was double disaster for the Red Bull-s, as Max Verstappen and Daniel Ricciardo had to retire during the same lap. The Aussie lost power in his engine, while the Dutch, following a clash with Hamilton in Turn 1, suffered a puncture. At the garage, the Red Bull squad was already packing to go home. It was their first double retirement since the 2010 Korean Grand Prix.

Hamilton’s Mercedes came to life and he passed three cars in a single corner. He engaged the DRS to pass Alonso as well on the straight. Then Ocon and Hulkenberg were his next victims, as the Brit hammered passed them. The champion then passed Gasly for the fourth sport.

There was a rough ending for the Ferrari’s. Kimi Raikkonen had to pull out after hitting a mechanic on the pit lane. Unable to receive Vettel, the team forced him to remain on the track with tires that were already worn. With an almost 8-second lead over Bottas, Vettel was not to have a light finish. Bottas kept cutting the gap, gaining ground every lap. The Finn and the German battled on to the end, a dramatic war in which Ferrari’s driver clinched to victory.

Mercedes-AMG PETRONAS put their both drivers on the podium, hoping to go one step higher next week, when the racing resumes with the Chinese Grand Prix.