Well, some may think that if they are bigger, they are also smarter, cooler, better than everyone else. A hit-and-run event took place in Amsterdam recently, when a gigantic Porsche Cayenne pushed a tiny smart into the river.

The driver of the Porsche SUV seems to be losing control of his vehicle in a corner, while being chased around the city of Amsterdam, in Netherlands. Unluckily for the itsy-bitsy smart, it was parked right on the edge of the road, inches from dropping into water. Which is what it did, head first, with a bit of push from the Cayenne. The illicit driver did not even stop to see what he had done, but drove on, trying to get away.

Well, don’t get all flamed up! It is all part of an action movie called “The Hitman’s Bodyguard”, due to be released next year, on August, 18th. The video recently showed up on social media and the reactions got through the roof before they found out it was not the real deal, but a movie cut.

The plot brings to the silver screen the world’s top bodyguard Ryan Reynolds, getting a new client, a hit man who must testify at the International Court of Justice. They must put their differences aside and work together to make it to the trial on time. The action puts them face to face with an Eastern European dictator played by Gary Oldman.

Gary Oldman, Ryan Reynolds, Samuel L. Jackson and Selma Hayek are part of the exclusive cast. Who’s driving the SUV and who owns the smart, we’ll find out in 2017, but witnesses claim that the Hollywood Mexican beauty was behind the wheel. We just hope she is a better driver in reality than she wants to seem in the movies! 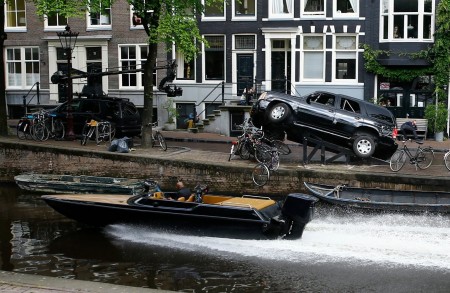 If you think the smart might still be on the bottom of the river, well, guess again. It was fished out of the water by a crane soon after the shooting.

The director is none other than Patrick Hughes, the man who directed The Expendables 3, released in 2014. The movie staff traveled the world for shooting the sequences, filming in Sofia, London and Amsterdam, among other locations.