It is Barbie dolls’ night out. We bring you the most extravagant pink Mercedes models ever spotted arount the world. Enjoy the ride in the passenger’s seat of Barbie’s bright pink Mercedes.

Mercedes-Benz has always been the sober people’s number 1, most of them choosing conventional colors like black, white, silver or sometimes red. But apparently, one can customize any car and turn it into something so flashy, that we would need sun glasses to be able to stare at it. So let’s see the most flamboyant Mercedes models ever customized for the fans of pink.

And we go straight into the country of extravagance. In Shanghai, China, a Mercedes SLS AMG looks like a Barbie doll has spilled all her nail polish on it. We hope the paint is better than nail polish though.

And we shall stay in Shanghai for a while. Pink is the new obsession there. This Mercedes-Benz SLK has got bumpers, grille, mirrors, alloy wheels, all pink, to chase the rain away on an autumn day. Don’t tell us it didn’t make you smile! 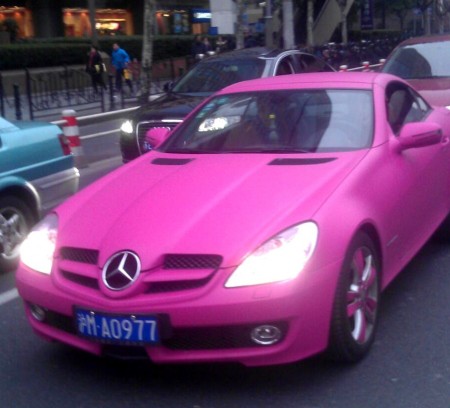 This is as pink as it gets!

Again spotted in China, but this time, in Beijing, coming straight from Fantasy Land, a flashy Mercedes-Benz CLS, standing out in the crowd and looking like bubble gum. Can you really pay attention to traffic when you see this rolling next to you? 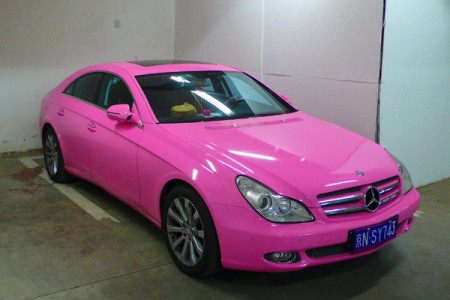 And yes, in China, it comes with the fashion. A shiny pink Mercedes G 63 AMG, bearing five 9s in the registration mark, is changing the definition of fun. Not hitting the desert, but hitting the town. Nine is the symbol of the dragon and dragons bring good luck in China. Looks like this driver has got lots of it in bright pink.

As hearbreaking as this might look, the Chinese were fast. The brandnew Mercedes CLA became a pink panther, squeezing into the heavy traffic of Macau and definetely not keeping a low profile. “Pink was love at first sight”, says Aerosmith in his Grammy awarded hit. Well, obviously, not for us!

We should have saved the best for last. But we save the most shocking for the latter position. We would expect some business man or some state leader to come out of the Mercedes-Benz S-Class 500. But turning it into a pink flamingo would be out the question for a man in black tie and classy suit. The gentleman or the lady would better bring the flip flops for this S.