Hamilton storms to fourth from last, Bottas second in Brazil

It was half bitter, half sweet for Mercedes-AMG PETRONAS in Brazil, as Lewis Hamilton started last after a crash in the qualifying, but finished fourth, two weeks after he got the fourth World Championship title. At the front, the pole man Valtteri Bottas was overtaken at the first turn by Ferrari’s Sebastian Vettel, who eventually passed the finish line first.

First lap was a madness, as Red Bull’s Daniel Ricciardo got rear-ended, went off the track, returned, but needed to pit for new tires. Stoffel Vandoorne from McLaren and Sebastian Ocon from Force India, followed by Kevin Magnussen from Haas, left the race after half lap. 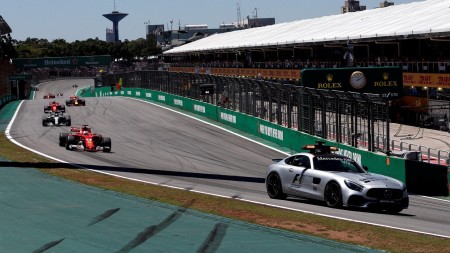 The Safety Car was deployed until the area got cleaned. Going up to the 4th spot under the Safety Car, with the drivers ahead pitting and very happy about it, Max Verstappen said it was sunny when he was asked, from the pitwall, how everything went on the racetrack.

Bottas smashed the 2-second gap between him and Vettel when he returned on the racetrack after changing tires, but the German managed to move away and get the Finn off his back. 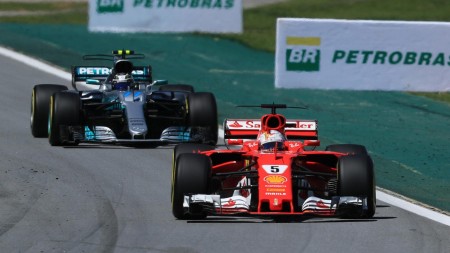 Starting last, Lewis Hamilton stayed at the top for lap after lap, delaying the moment of changing the soft tires until lap 44. The Brit came out on the track in the 5th spot, more than 18 seconds behind the leader Vettel and some 10 seconds behind Red Bull’s Verstappen. But he managed to overtake the Dutch at the 50th lap. Verstappen asked to pit three laps later: “These tires are horrible”, he said, but he was told to stay out. He eventually pitted and went out in the 5th position. Hamilton was going for the podium and almost caught Kimi Raikkonen at the very last lap, but was too far back to overtake him. 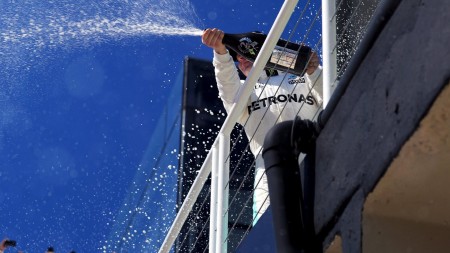 Sebastian Vettel wins the Brazilian Grand Prix, followed by Mercedes’ Valtteri Bottas and by teammate Kimi Raikkonen. Lewis Hamilton will have to settle for the fourth.