Mercedes is one of the most successful brands in Formula One history. That is an incredible feat considering the company withdrew from motor racing in 1955 after the Le Mans disaster that killed 84 people – and only returned in 1994. Much of Mercedes’ success has come in recent years. But there have been some huge names in the world of motorsport that have represented the Silver Arrows. They are drivers that have regularly featured in Formula 1 bets throughout the years – and here are five of the very best ever to represent Mercedes in Grand Prix racing.

After driving with McLaren for five years, Lewis Hamilton surprised the sport by announcing in 2013 that he would be replacing Michael Schumacher at Mercedes. At the time the manufacturer had enjoyed little recent success. Hamilton won just one Grand Prix in his first year – but all that was going to change.

Thanks partly to a change in the regulations that brought in turbo-hybrid engines, Hamilton began an incredible run of form in 2014. He won the Drivers’ Championship that year and went
on to claim five out of the next six, equaling the record for most wins. He has been credited with bringing a new global audience to F1.

Fangio only drove with Mercedes for two years but his time with the Silver Arrows established the Argentine driver as one of the very best at the beginning of the Formula One championship
we know today. He was already a champion when he joined Mercedes, but he won back-to- back titles in 1954 and 1955.

Mercedes then withdrew from the sport, leaving Fangio to continue his racing elsewhere. He finished his career with five drivers’ championships – with four different teams. After all this time
he still holds a number of records in the sport, including the highest winning percentage, thanks to his 24 victories in just 56 races.

If it wasn’t for Lewis Hamilton – one of the best drivers there has ever been – it is a fair argument to suppose that Nico Rosberg might well have added to his solitary drivers’ championship in 2016. Rosberg was joined by Hamilton at Mercedes in 2013 after previously battling against each other in karting.

The relationship between the two drivers was never entirely cordial but they pushed each other on for four years, sharing three titles. Rosberg announced his shock retirement after finally
beating Hamilton – and the rest of the competition – in 2016 and was inducted into the FIA Hall of Fame a year later. 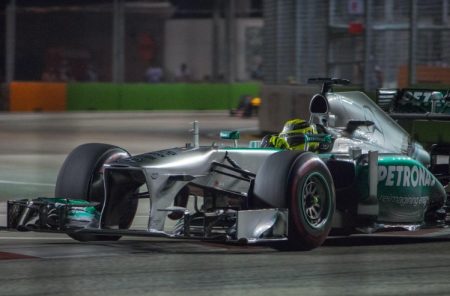 It may be a little controversial to include Michael Schumacher in this list. He is undoubtedly one of the finest F1 drivers ever – but his time with Mercedes came after his motorcycle accident in
2009. He was never really the same driver that had won a record seven drivers’ championships earlier in his career.

Schumacher had won titles with Benetton and Ferrari but came out of retirement after being given the chance to drive with Mercedes. His three seasons with the Silver Arrows resulted in
just one podium finish. But it is for his time earlier in his career that he warrants a place here.

After Nico Rosberg retired in 2016 it was Valtteri Bottas that came in to partner Lewis Hamilton – and it is the Finn that is credited with bringing back some much-needed harmony to the
Mercedes team. He might not have won a drivers’ championship in his time, but he definitely played his part in Mercedes’ success.

He helped win the constructors’ championship in each of his five years at Mercedes and finished as a runner-up to Hamilton in both 2019 and 2020. Still driving as part of the Alfa Romeo team in Formula One, Bottas has 10 Grand Prix victories and has made the podium 67 times.