The night of the stars at the Laureus World Sports Awards

It was the night of tennis in Berlin, at the Laureus World Sports Awards, where Mercedes-Benz is a partner. Both Serena Williams and Novak Djokovic got awards for their performance in 2015. The non-executive Chairman of Mercedes AMG PETRONAS, Niki Lauda, was rewarded for a lifetime in sports.

Serena Williams is celebrated yet another marvelous year on the tennis court with three Grand Slams won and was named Laureus World Sportswoman of the Year Award.

And it was a great night for tennis in Berlin, as Novak Djokovic was honored with the Laureus World Sportsman Award for the second straight year and for the third time in his career. And he seems to have fully deserved it after winning 82 matches out of 88, four Grand Slam titles and seven other tournaments.

There was a special posthumous Laureus Spirit of Sport Award to celebrate the amazing life and career of Johan Cryuff, who died last March. It was his son, Jordi Cruyff, who received the trophy. 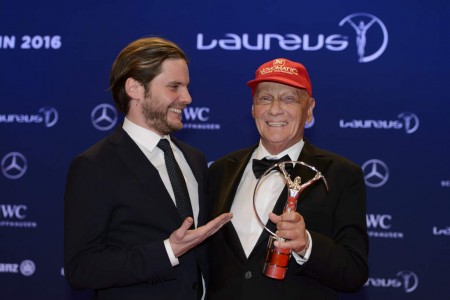 Here are the winners of the Laureus Awards.

Laureus World Team of the Year: All Blacks

Laureus World Sportsperson of the Year with a Disability: Daniel Dias

It was ballgowns, tuxedos and… sneakers in Berlin, where stars Novak Djokovic and Nico Rosberg led the way as the world’s top athletes joined the Sneakers For Good campaign. 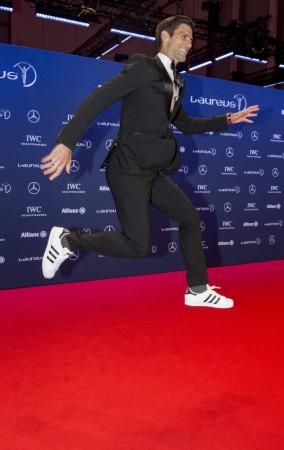 Djokovic, who performed an acrobatic jump to show off his sports shoes on the red carpet, said:

“We’re here to celebrate Laureus and what they stand for. For 16 years they have done so much with Sport For Good. They have changed so many young lives for the better.”

The Formula 1 star Nico Rosberg, who won 3 out 3 races this season, also matched his tux to his bright white sneakers to his shirt.

“It’s a fun idea,” said Rosberg. “Most of us seem to have gone for white ones. It’s a fun way to get the message of Laureus out into the world.“