Will the Mercedes-Benz G-Class star in the 2018 Jurassic World: Fallen Kingdom?

The final countdown has begun for the 2019 Mercedes-Benz G-Class, the off-roader that survived 4 decades and that has defied generations of cars come and gone. The year the new G hits the showrooms, the new “Jurassic World: Fallen Kingdom” hits cinemas across the globe. Considering one of the company’s video teasers, will the vehicle star in the movie set to premiere this summer?

Mercedes-Benz has placed vehicles in the Jurassic Park action-adventure franchise movies since the very beginning. The first M-Class generation showed up in the first installment of the series, back in 1997. 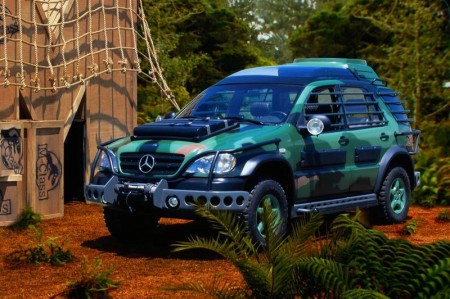 Not long ago, Mercedes launched a video teaser with strong Jurassic Park vibes, as part of the “Stronger Than Time” series. The short film shows the vehicle under water, with the aquatic life palpitating, ready to be awaken from a long-lasting sleep. Eventually, the G-Class is shown locked inside a gigantic ice cube, hinting that it has preserved its iconic DNA of high-performance, state-of-the art assistance systems for safety and comfort.

The video seems to be nothing but a clue for the fans of the Jurassic series. Mercedes is still keeping the information under wrap, probably waiting for the off-roader to be officially revealed at this year’s Detroit Motor Show, on January 15th. Before they go public with it, we can only hope to see the boxy G on the screen, starting this upcoming June, staring in “Jurassic World: Fallen Kingdom”.

Check out the trailer of the 2018 Fallen Kingdom below. Is there any Mercedes model that you can spot? They all stayed hidden for us!