The Mercedes-AMG V8 engine is not going anywhere. Yet…

The Mercedes-AMG V8 engine is not going anywhere just yet. There are though rumors that the sports car maker is going to ditch it in no time. That is not going to happen in the next decade, inside sources claim.

Mercedes-AMG launched the 4.0-liter V8 engine with the official reveal of the AMG GT coupe, back in September 2014. It was a step towards downsizing, with stricter emissions regulations rising across Europe. It came in two flavors, with 462 horsepower for the standard version and 510 for the S top-of-the-range variant. The power mill soon found room under the bonnet of other AMG GT variants and AMG models designed in Affalterbach.

Mercedes chose to electrify it, so mild-hybrid variants showed up in the company’s portfolio. The Germans then revealed the Mercedes-AMG GT 63 S E Performance. The 4-door coupe is the first high-performance plug-in hybrid of the company. The front-mounted 4.0-liter twin-turbocharged V8 delivers 639 horsepower. It gets the assistance of a 204-horsepower electric motor, mounted on the rear axle. They send to the tarmac a total of 843 horsepower and 1,400 Nm. A belt-driven starter-generator provides it with an extra 14 horsepower. 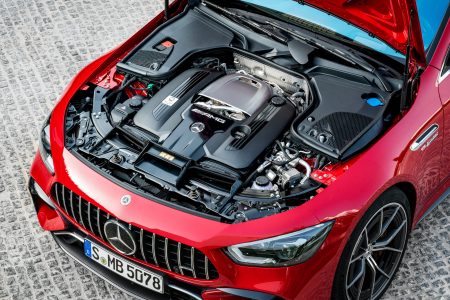 The clock is ticking for the Mercedes-AMG V8 engine

With the ever stricter emission regulations and the plan of the European Commission to kill off combustion engines by 2035, Mercedes has to comply. The Germans have already announced that they are working on it. But the V8 is not going to surrender just yet.

Philip Schiemer, head of AMG, Maybach, and G-Class confirms that it is here to stay. “There will be a future, yes”, he told Road & Track. “I think for the next ten years, we will see the V8s for sure. We have a lot of customers who love their cars and I still think that we will see those people buying the cars for a long time,” Schiemer added. 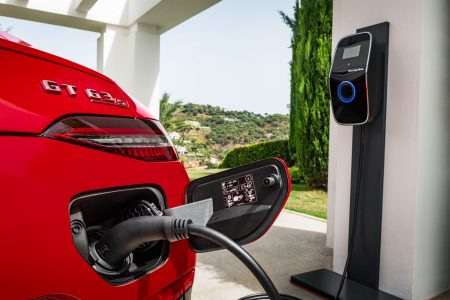 But hard times are coming for the engineers. They must design the power unit capable of breathing out less CO2. Therefore more plug-in hybrid variants will follow. Yet, the financial investment sees a dead end. Mercedes must become an all-electric company and only nine years are left after Mercedes has changed the plans to pass to “Electric Only” in 2030 instead of 2035. The clock is ticking for them as well and it won’t be long until we will see all-electric AMG cars.