Here we go again. Mercedes-AMG ONE deliveries delayed once more

Mercedes-AMG delays the deliveries of the ONE hypercar once again. First customers should have received it at the beginning of fall. But all they got was the news on postponement.

Mercedes revealed the Project ONE four years ago, indicating a Formula One-inspired powertrain and the exclusivity of the model. With a price tag of €2,75 million and a limited edition of only 275 units, the model seemed programmed to be a success. But the engineers have been going through hell (yes, the Green Hell of Nurburgring included) to rev down the 1.6-liter turbocharged engine developed in Brackley, where F1 cars see the light of day. The combustion unit will get the assistance of four electric motors for a total output that exceeds 1,000 horsepower.

The Mercedes-AMG ONE, much too loud for the streets of Europe and of the U.S.

The V6 power mill is still a work in progress and experts can’t seem to find the ends of it. It is only normal for a Formula One engine to feature an over-the-top red line, but high-revving is far from being economical in terms of fuel consumption and emissions for a street-legal car. And the ever stricter regulations would not allow it to come out like that. There is apparently an ongoing problem regarding the exhaust sound. As tame as it may sound on racetracks around the world, it is much too vocal for the streets of the European Union member states and the U.S. The Mercedes-AMG ONE is likely to receive a redesigned exhaust system. 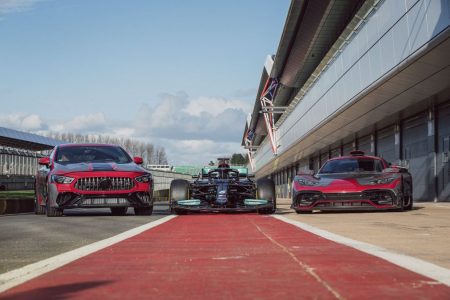 Due to all these obstacles arising along the way, Mercedes first delayed deliveries to the fall of 2021. A new delay is underway. That means that the customers eagerly waiting for their one of 275 hypercars will have to wait even more. The soonest they will get their hands on it is the beginning of 2022. When they do, they will have to refrain from selling it for an undisclosed period of time, according to the contract they signed when they reserved an example.