The Mercedes-Benz GLE is the most American model of the Stuttgart-based luxury carmaker.  In 1997, it was the first model to be manufactured in the USA, at the then-new Tuscaloosa plant in Alabama. Four generations have already been produced since then and, with the facelift of the third, in 2015, the name was switched from the ML into the GLE, in compliance with the new designations philosophy.

On the same occasion, the coupe variant showed up, one that will proceed to the new generation. The Mercedes ML shot to stardom, as it starred in the Jurrasic Park series. The first generation showed up in the first series “Lost World: Jurassic Park”, in 1997, and GLE Coupe made its debut in the fourth series, “Jurassic World” in 2015. 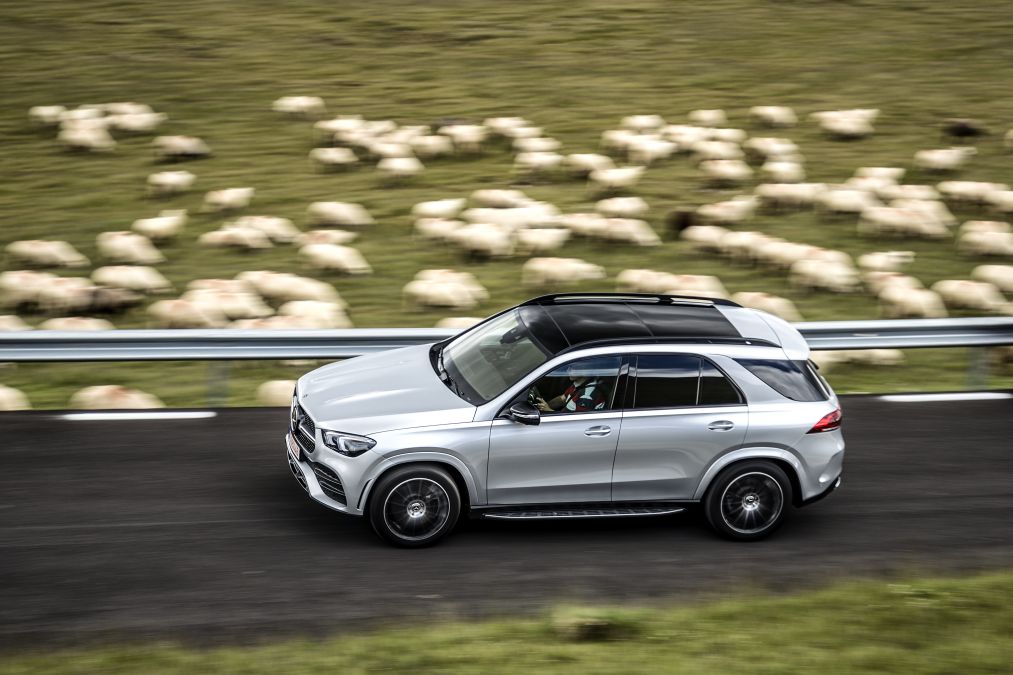 The new Mercedes-Benz GLE SUV is a giant to the European standards, but in the US, it is nothing but a mid-size SUV. It is almost 5 meters long and 2 meters wide without mirrors. The wheelbase of 2.995 mm is only 40 mm shorter than the short wheelbase S-Class luxury sedan. In the back, the kneeroom is colossal, with a three-palm gap between the knees of the passengers and the backrests of the front seats. The GLE is the first SUV in the segment to offer optional 6-way fully electrical adjusted seats in the second row. The test car did not have them, but if electric adjustment for the second seats row is ordered, then the two outer seats in the second row can slide forward-backward by 100 mm. 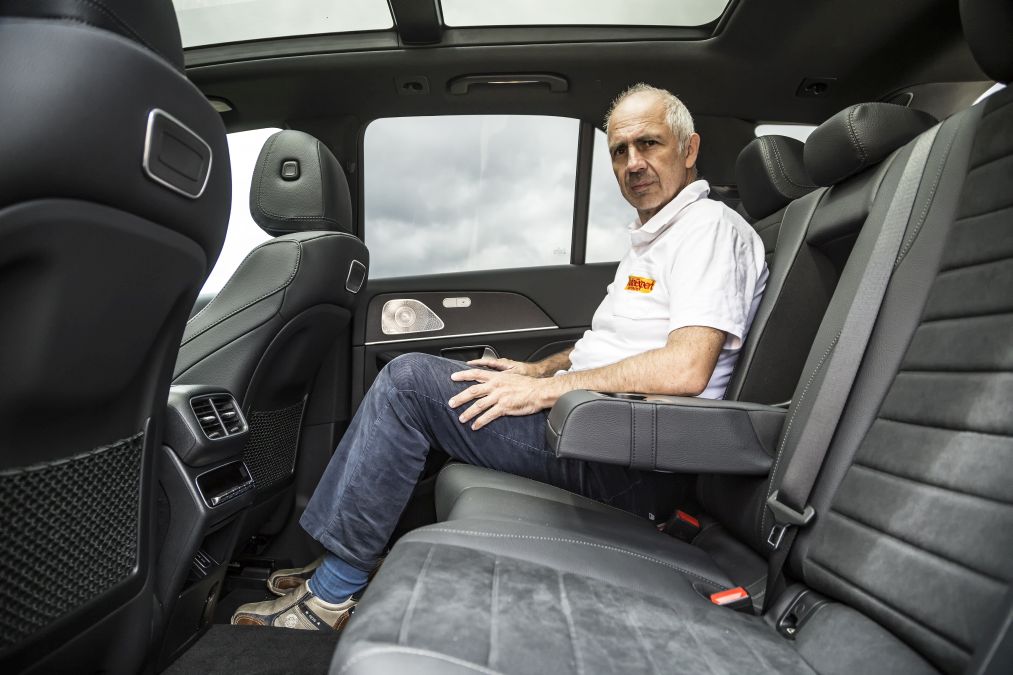 Outside, the GLE sports a slimmer silhouette. The narrow headlights and the wider front air intakes provide it with a more athletic flare, even though the engine hood is still high. We very much liked the narrow taillights, but the chrome-plated quad exhaust pipes are faux. The pollution standards impose restraints.But, the 40/20/40% foldable rear seats are offered standard, but by folding it, the surface achieved is not perfectly plain. The standard boot volume is of 630 liters, but if the small-sized spare wheel is not ordered, almost 200 liters beneath the boot floor, where the Tirefit device is, are gained. By folding the rear seats, the volume goes up to an impressive figure of 2,025 liters. The new GLE generation is also the first to get the 7-seat option, reserved so far exclusively to the bigger and more expensive sibling, the GLS. 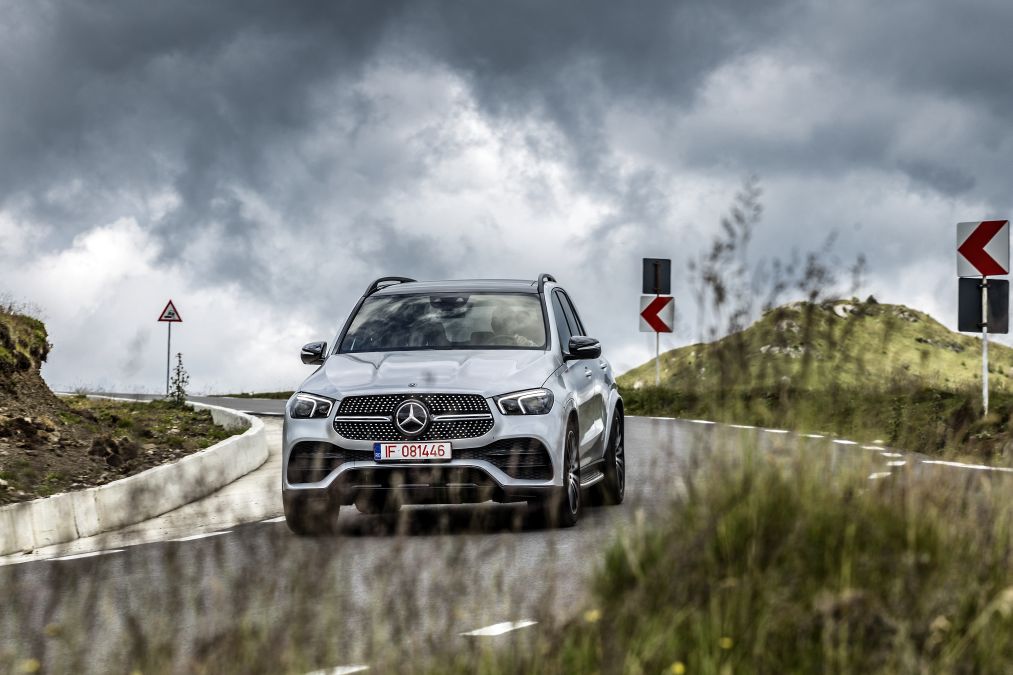 The interior is completely new and very modern. The good news is that the dual screen with the two 12.3-inch displays comes as standard. The matte wooden insert and the new rectangular air vents look awesome and so do the piano keyboard-like climate buttons with aluminum looks.

I would have drawn the conclusion that the interior gives the impression of a better quality than that of the BMW X5, but the texture of the dashboard plastic, that is though, soft and pleasant to touch, is not as elegant as in the BMW X5. But there is the option of wrapping the dashboard and door panels in Nappa leather. The two handles in the center console are very practical in case rough terrain is raided. 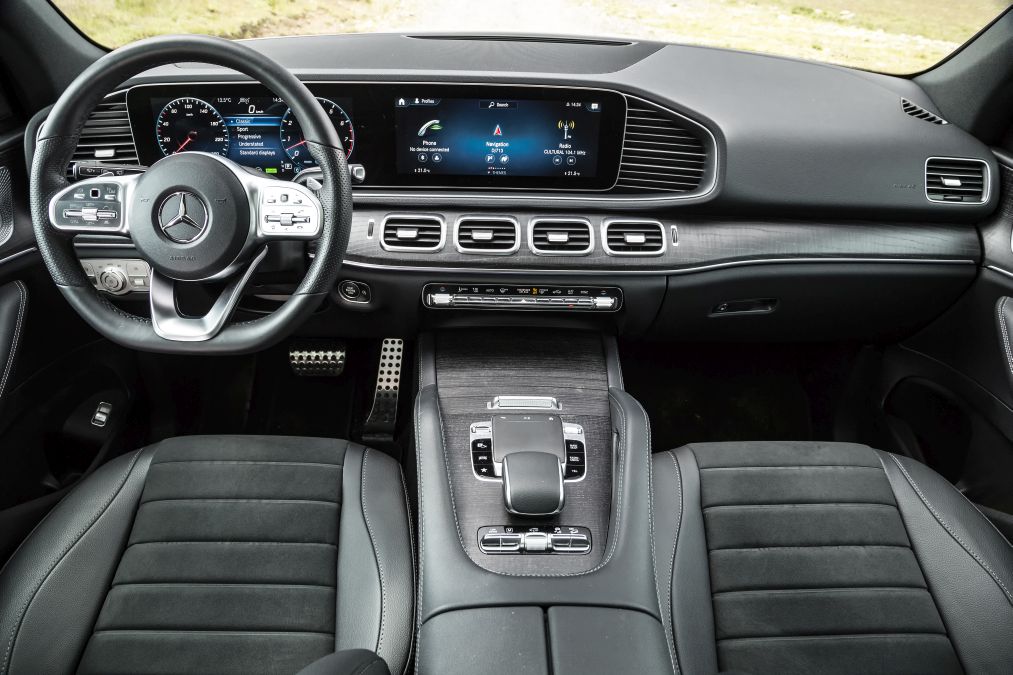 The MBUX infotainment system supports vocal control, touch control or by the help of the touchpad with a generous control surface, but the latter is not the most precise, especially while driving. A better solution is operation by the two touchpads on the steering wheel. They are actually very practical and precise, as in other Mercedes models. From the left hand one, the dislay of the dashboard digital indicators is operated. As in other Mercedes models, the dashboard can be configured in four different styles: Classic, Sport, Progressive and Understated. The display of the infotainment system features an exceptional resoluton and the MBUX system is instantly loaded when you switch the engine on. In the GLE, the MBUX system also holds specific off-road features. It shows the lateral and logitudinal tilt angle, the ground clearance at one of the six possible levels and the real-time torque distribution.

Our test model was equipped with the Airmatic pneumatic suspension (2,034.90 euros) and with the Off-road package (2,261 euro), but also with the new 3.0-liter six-inline petrol turbo engine.

Mercedes justified the architecture change from the V6 to the six-inline by the fact thaat catalytic systems can be mounted closer to the engine, which is crucial from the perspective of the ever stricter emission norms. We would dare say that this configuration is effective for refinement as well, because the six-line engine is very well balanced and completely quiet when idle, as if you would start an electric engine car.

The new engine is a major success that benefits from a smart supercharging. An electric Borg Warner compressor that skyrockets to 70.000 rpm in just 300 ms increases the low engine speed supercharging pressure at start-offs or when you accelerate, until the classic turbo cuts in. Additionally, the 48V network onboard supplies the integrated starter-alternator that provides to the battery the energy recovered when breaking. Besides the recovery function, the starter alternator with a 22-horsepower output and a 220-Nm torque assists the thermal engine when in load. Thus the turbo-lag term has vanished, because, due to the spontaneous reaction of the electric compressor and to the support provided by the starter-alternator, the engine spontaneously responds to the press of the throttle. 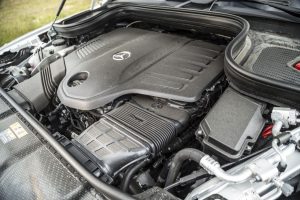 Actually, the engine displays its vigour even when idle, the accelerations being perfectly linear almost as for an electric engine. Starting at 1.600 rpm, the engine develops the maximum torque of 500 Nm, that remains constant up to 4.000 rpm. When driving, the 3.0-liter 6-cylinder engine feels like a 500-horsepower V8, featuring an impellent higher than its displacement. Even though the car weight of 2,220 kg, it accelerates from a standstill to 100 km/h in just 5.7 seconds, which is an impressive figure for this weight.

The starter-alternator assisting the engine in loads, namely exactly when it consumes the most, contributes to a significant fuel consumption reduction. We achieved a consumption below 10 l/100 km at a highway speed of 130 km/h and, almost effortlessly, reached a combined fuel consumption of 10.5 /100 km. These are figures similar to those of a diesel and for this result, the excellent automatic 9G-Tronic transmission with a high gear ratio of 9,15:1 between the first and the last gear, also comes a long way. For example, at 160 km/h in the 9th gear, the rev meter only shows 2,200 rpm. The gears can be shifted automatically or manually fom the paddles from behind the steering wheel and there is a pure Manual mode, selectable via a button in the center tunnel, next to the one for the ground clearance adjustment.

The new Mercedes GLE is built on the MRA platform used for the Mercedes sedans and SUVs with rear-wheel drive. Despite the use of light materials (the hood is, for example, made of aluminum), the weight was not reduced due to the hybrid system, that added a few tenths of kilograms after the diet.

With the optional Off-road package and the Airmatic suspension, the driver additionally benefits from the Off-road+ mode (operates at speeds below 45 km/h, the ground clearance is at the maximum height, level 3), besides the usual Eco, Comfort, Sport, Individual and Off-road (operational at speeds up to 110 km/h).  Ground clearance may be adjusted in six levels, from -2 to +3. In the Sport mode, it goes down to -1 and if you should wish to load heavier items, it lowers by 40 mm extra compared to the lowest level.

Even though such SUVs would mostly ride on the road, Mercedes wanted to keep the off-road abilities that made the ML a star. Thus the 4Matic system is completely new, allowing the torque transfer from 0 la 100% front/rear and backwards. With the Off-road package, the reducing gear set with lock effect from 0 to 100% of the electronically controlled multi-disc clutch. There is a major difference between the Sport and Comfort modes that fully justify the adaptive pneumatic Airmatic suspension.

Once the Sport most is engaged, the body roll is extremely low, the steering is heavier and the GLS drives very sharply. It almost never understeers, because the electronics transfer enough torque to the rear on time to avoid the act. On the limit, it does not show the aggressivity of the BMW X5, but whoever may want more can choose the revolutionary active suspension that is very costly (7,735 euros), but also comes as a replacement for the active stabilizing bars, enhancing sharpness and, on the other hand providing assistance in the off-road by its free-riding feature (the car balances on its own to extract itself from rough situations or may adjust the damping on each wheel by the press of a button in the dashboard). 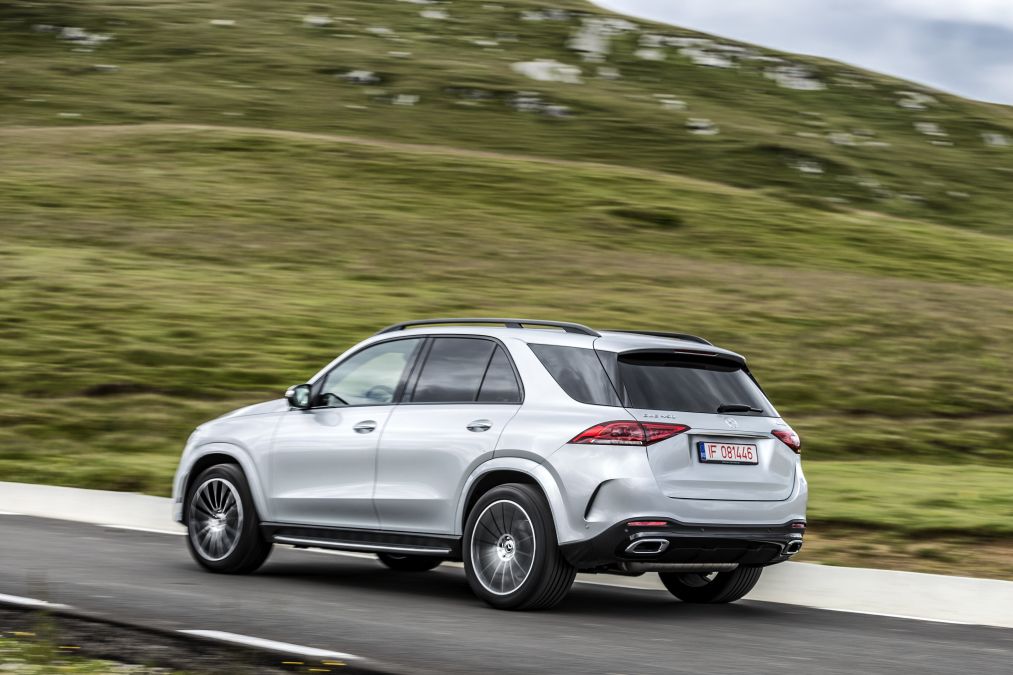 With the Airmatic, comfort is – from where we stand – superior to any rival in its class. In the Comfort mode, the new pneumatic suspension is so well set, that you don’t feel a single bump. It is Mercedes’ virtue for having succeeded to offer supreme comfort without setting a too soft suspension in the Comfort mode. Therefore, on long-distance drives, that pumping effect does not show up, the suspension being a bit firmer. The drive train is also exceptionally quiet and, despite the enormous tires of 315/40 at the front and 275/45 at the rear, mounted on 21-inch wheels, the drive noise is undistinguishable. You can still carry out a decent conversation at 180 km/h along the highway, as if you drove by 50 km/h. And despite its SUV stance and the massive side mirrors, no intruding wind noise is heard, not even around the mirrors. And this happens considering that the A pillar is more vertical than that of the previous generation.

The all-new Mercedes-Benz GLE 450 4Matic is an extremely capable car. Very well built, excellent in terms of quality, with a huge interior, the fourth generation for the Mercedes GLE offers an exceptional ride comfort, is extraordinarily quiet from all perspectives and the new revolutionary supercharged inline-six turbo engine displays a superb response and a decent fuel consumption.