The second generation Mercedes Citan still uses the Renault platform and engines, but the interior is almost 100% Mercedes, and the suspension settings are adapted by Mercedes. We drove the Mercedes Citan Tourer 110 CDI .

Cooperation in the commercial vehicle segment is the last remaining link in the partnership with Renault. Mercedes X-Class based on Nissan Navara is history, as is smart forfour based on Renault Twingo. Nissan also had no luck with the luxury brand Infiniti, which took over the platform of the former GLA.

Mercedes has even put Renault shares up for sale, valued at $ 364 million, and Nissan has already sold its 1.15 billion-euro stake in Daimler, while Daimler still owns 3.1% of Nissan.

Instead, cooperation between Renault Kangoo and Mercedes Citan continues in the second-generation Citan, despite criticism of the first generation. But Mercedes has thoroughly embraced its criticisms and changed its strategy.

Although under the body we found the same Renault Kangoo platform and all the engines are coming from Renault, the exterior design is Mercedes, the interior is almost 100% Mercedes and, more importantly, Mercedes has adapted the suspension according to the brand’s requirements. What came out? A Citan which is more Mercedes than before.

In this test, we deal with the passenger version, Mercedes Citan Tourer, because there is also a cargo version, Citan Panel Van, and later will come a variant with a long wheelbase, a mixed version called Mixto, and in 2022, a more luxurious, the T-Class, which will compete with the VW Caddy Life, and the electric version of the T-Class, named EQT. 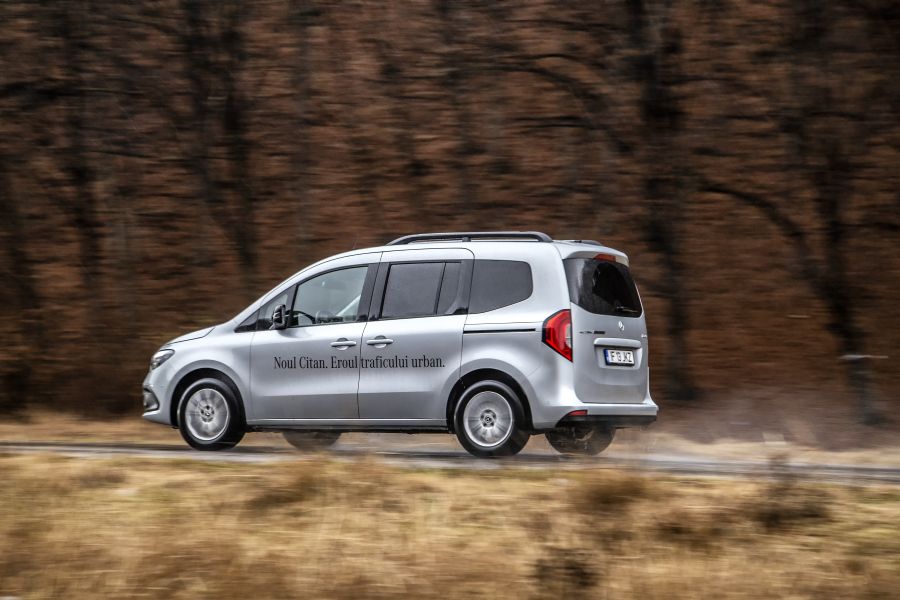 
Mercedes Citan Tourer comes with three equipment lines, Worker Plus, Base (3,748 euro more expensive than Worker)  and Pro (5,547 euro more than Worker Plus), the latter being also present in the test car and including electric windows in the two sliding doors, door handles and sliding door rails painted in body color, height-adjustable front seats and with electric lumbar support for driver , folding tables on the backrest of the front seats , LED interior lights, two USB-C sockets in front and 16-inch alloy wheels.

First contact with the inside reveals the familiar atmosphere of the former generation of compact Mercedes models, with a 7-inch touch display for the multimedia system, attached to the top of the dashboard in an optimal position, analog instrument cluster on a black background, a display on a blue background, typical Mercedes, for the on-board computer and other information combined with a steering wheel from the E-Class before the facelift, with the two mini-touches, the left one for the on-board computer display control and the right one for the multimedia system control.

And as with other Mercedes models, the operation is easy and logical and even the control lever on the left of the steering wheel has a Mercedes design. It is also surprising that the MBUX system (1,120 euros) comes with fast-moving online browsing, and the display resolution is decent. Of course, you can also order a multimedia system without navigation (470  euros). 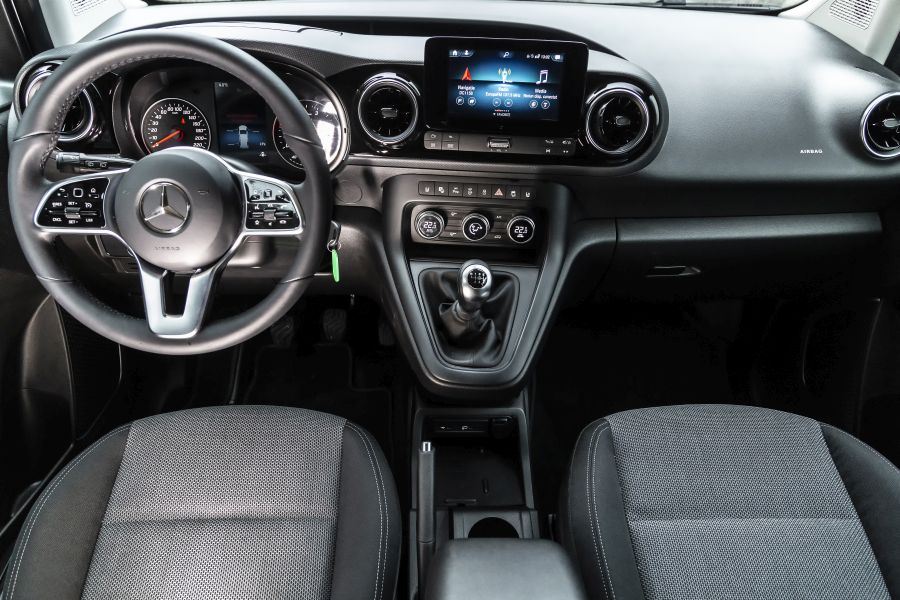 There is no controller, but the multimedia system menus can be accessed from the physical buttons below the display. A Renault breeze blows only if you look at the rotary controls of the dual air conditioning (334 euros), identical to those from Dacia Duster and Renault Clio, but  they are of very good quality, pleasant to touch and to use and have a clear temperature display inside the buttons. It is hard plastic everywhere, but it is suitable for a commercial vehicle and the assembly is very good.

The driving position is optimal, the seats are also developed by Mercedes and offer sufficient lateral support, are very well configured and have adjustable lumbar support. Unlike the previous generation, the Mercedes Citan Tourer comes standard with two sliding doors, which is a great advantage, and in the rear it has a tailgate with a rear view window.

However, the bench is quite flat and has a short cushion, so tall people will not have enough support for the thighs. The bench is folded 1/3–2/3, and by folding it result an almost flat loading surface and there are practical plastic protections at the base of the backrest.

There is a lot of space in the rear in all directions and from this point of view the Citan Tourer is a very spacious alternative to SUVs and minivans as a holiday car. And there are also practical storage spaces, in the ceiling (a Renault invention), in the central armrest and in the doors. Plus two USB-C sockets on the front and two classic USB sockets on the rear.

We drove the diesel version, which is notable for its low noise level over almost the whole usual speed range and low fuel consumption. Driving more dynamically, the fuel consumption has reached 7 l/100 km, but an economical ride can reduce consumption to 5.5–6 l/100 km.

The 95 HP are enough to transport people from point A to point B and drive the car relatively decently up to 140 km/h, but the in-gear accelerations are quite slow, and in overtaking, you feel the need for more than the 260 Nm available from 1750 rpm. We hope that in the luxurious version, the T-Class, Mercedes will mount its own 2-liter OM654 engine in the deflated version, 116 HP, in order to offer more torque and to compete with VW Caddy Life which also has a 2 liter TDI.

Mercedes has substantially modified the suspension, which has carefully adjusted springs and shock absorbers and, in front, a reinforced stabilizer bar, while the front suspension has been insulated from the body. When crossing short bumps, the suspension handles very well and remains quiet, but when crossing long bumps it has a slightly higher amplitude.

But this happens with the car unloaded, and certainly when the car is loaded, the suspension has a slightly shorter stroke. The variable assistance steering provides good feedback and is pleasant because it is not very assisted. Citan also meets Mercedes standards for assistance systems, with standard blind spot assistant, fatigue detector (Attention Assist) and active lane keeping assistant.

The price of 25,537 euros is not low, and with navigation, Thermotronic, alloy wheels and other small interior features (heated seats, luggage space cover, leather-wrapped steering wheel, reversing room), it goes to 30,000 euros.

The Citan is now 80% Mercedes, compared to 20% before, because the interior, design and suspension tuning are typical Mercedes. The diesel is refined and economical, but its dynamics don’t match the rest of the car.