Fifty years have passed since Sir Frank Williams took up the management of his own Formula 1 team. Mercedes-AMG wishes him a happy anniversary in a very special way. Lewis Hamilton takes him for a spin in the Mercedes-AMG E 63 Cabriolet.

With Sir Frank Williams equipped for the ride, his daughter Claire, who has been managing the team, jokes about convincing the world champion to drive for Williams in the Formula 1 championship.

When the garage door opens, Lewis pushes the throttle on the AMG and flashes on the Silverstone race track. 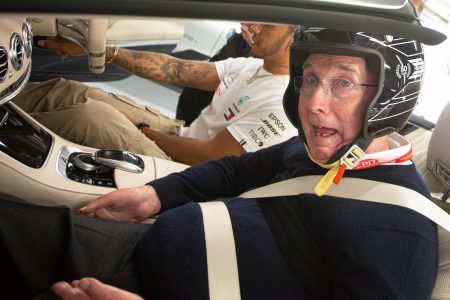 “I think the car will be glad when you get out of it”, says Williams after the first few corners, in which the tires screeched loudly.

“I’m going to get some drifting in this one”, he tells his co-driver. “Breaks going on okay”? Sir Williams asks. “Nope”, is the pro driver’s answer, before going off the track for some doughnuts and for ruining the tires.

What does the 4-time world champion when he is told to stop and go to the pits?

Sir Frank Williams is a rival, yet a friend of Mercedes-AMG. He and the Mercedes Team Principal, Toto Wolff, have been keeping in touch since 2013, when Toto left Williams. Toto Wolff’s wife, Susie Wolff, used to test drive for Williams before retiring from motor racing.

Former pro driver and mechanic, Frank Williams has been a tetraplegic and in an wheelchair since his car accident in France, in March 1986, when he was on his way to the airport to return to London. He lost control of his rental car and dropped eight feet (2.4 meters) from the road, onto a field, with the car ending up upside down. The accident caused him a spinal fracture. 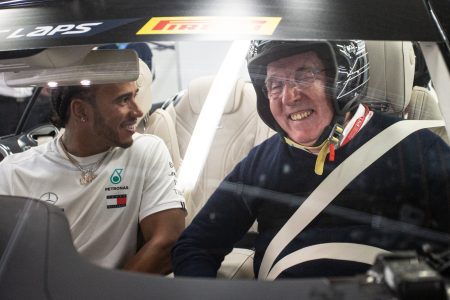