A whole car made of ice? A Russian car enthusiast built a Mercedes-Benz G-Class in Siberia. Vladislac Barashenko found plenty of raw material around him.

Owner of a car shop called Garage 54 in the city of Novosibirsk, on the banks of Ob River had it all planned out for the cheapest car out there. With an average temperature of -12 degrees Celsius (10 degrees Fahrenheit), his last worry is that he might find his creation, the ice G-Class, in a pool of water in the car park. 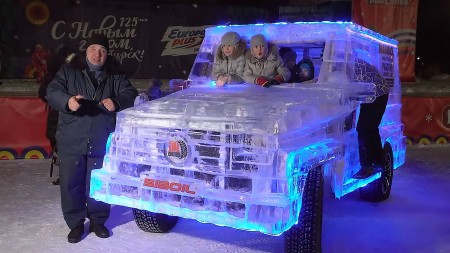 His vision in ice is still at risk though. There is a combustion engine under that icy hood, that might, at any time, turn the vehicle into a victim of heat. Barashenko got his hands on an old Soviet UAZ 469 and stripped it down to the chassis. That was actually his blank canvas, before he started sculpting the boxy body of the G-Class. A steel frame keeps everything together. To the frame, he attached no less than six tons of ice blocks made, as he says, “from pure Siberian water”.

Despite its massive weight, the G still runs. The video – all in Russian – shows the ice-cold vehicle driving through its natural habitat: snow.