The stroboscopic LED SLS AMG in Japan. Are you wearing sunglasses?

A Mercedes SLS AMG stoned Japan as it came out into the street looking like the inside of a night club, which is anyway prohibited in Japan until 2016. But apparently, not those on the highways.

What can you do to stay in the spotlight in traffic especially by night? Well, it’s quite difficult if you bought a black car. We all know black objects on black backgrounds are virtually invisible.

But a Japanese driver found a way out of obscurity. He fitted his Mercedes SLS AMG with LED and turned it into walking (well, driving) Christmas tree. In the country of the Dekotora (the decorated trucks), the SLS sports colored LED lights in the front grill, up on the hood, in the boot lid and in the door frames. Going back front, the star and the supporting horizontal strut now became bright orange. From under the car, there are neon stroboscope lights flashing.

When the gullwing door of the LED SLS AMG open up, the car looks like a seagull that just bathed in a sea of phosphorus. The interior is quite a night club, since those are going to be legal in Japan starting 2016, the Diet decided.

The mobile Christmas tree was spotted at the Tatsumi Parking Area, a hangout place for the famous Yakuza, the Japanese mafia. So you don’t want to mess with these guys and with their cars either.

And since we mentioned the Dekotora, we must tell you things can get a lot worse than this gullwing in the Land of the Rising Sun. If you are driving around Japan – on the left side that is – and see this in your rear view mirror, just step out of the way! 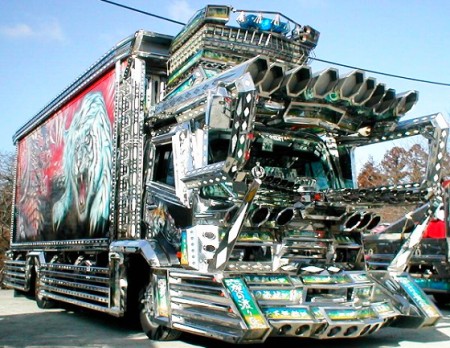