It is quite strange, but the Canter Fuso Eco Hybrid  is still the only manufactured light lorry bearing a diesel-electric hybrid propulsion, in Europe, so far. It puts together new techs and classical solutions gathered from around the world.

Present at the truck exhibition in Hannover in 2012, the Fuso Canter Eco Hybrid is not absolutely up-to-date. The new thing is that the first European fleets began to proclaim big fuel savings, of 25% up against the classical propulsion models and they have the intention of gaining back the capital expenditure in the next years. Thousands such vehicles are already cruising all across Europe. The model is also manufactured in Portugal, as the ones in the big series, and the technology and a great deal of the hybrid propulsion components come from Japan.

Built up on a 7,5 tons total weight frame, the Canter Fuso Eco Hybrid still has resources to transport a 4,8-tons load. The base of the propulsion is the 4-cylinder 3.0-liter and 150 HP engine, previously known from the other versions of the Fuso truck. Right between the clutch and the gear box, in the linkage, this was completed with an compact a 40 kW electric engine – which represents an extra terce to the power of the Diesel.

The electrical power energy  is extracted from a Lithium-ion battery package. This was set up on the left side of the frame and it is quite similar in dimensions and symmetrical to the diesel tank. The maximum storage capacity reaches 2 kWh and the weight does not go over 65 kg. It is not too much when we speak about a 7,5-tons vehicle, but it is enough to move the truck up to 10 km/h. The charging of the batteries happens through the agency of this electrical engine, mostly during braking,  but also whenever required, during cruising. We must only mention that the batteries have a 10-years guarantee.

For the hybrids, the running strategy is actually more complicated than placing the parts on the frame. In this situation, the draftmen chose the parallel hybrid system, in which the two engines can function independently. To keep the auxiliary systems, the braking, the AC, the hydraulic power steering working, the Diesel engine stays silent during idling, while the truck is cruising at low speed. Up to 10 km/h, the Fuso Canter Eco Hybrid is electrically started, then, imperceptibly, the Diesel engine cuts in.

According to the charging level of the battery, to the road and to the cruising speed, the electrical engine draws out or goes back in. It will be back in the game any time the truck accelerates, even at high speed.

When the down-time takes more than a few seconds, the thermic engine automatically shuts down and is turned back on only when the truck starts again. There is no need to mention that the gas emissions and the noise of the 3-liter engine both stop. And so does the fuel consumption. This is the secret of the 23-25% Diesel fuel saving, already aquired by the transporters that are open-minded when it comes to new technology. 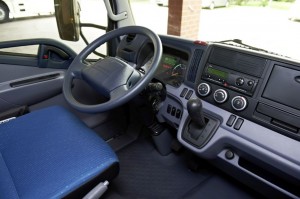 In traffic, the Fuso Canter Eco Hybrid is off to go, when the light turns green, as vigurously and silently as possible, without the 7 tons causing problems. The basic gearbox is a simple mechanical 6-speed one, but the clutch has two wet discs and everything is under electriconical control. The advantage of this solution is that gear changes are pre-selected, so that when the time is right, one of the clutches cuts in and the other one cuts out. The driver can see it in the revmeter or can hear the engine, but will not feel the exact moment when the gears change. This is how smooth the process happens.

As odd as it may seem. It is amazing how one of the giant vehicles can include such advanced technology regarding the propulsion, but also solid technical solutions from ten years ago.