Mercedes-Benz officials say that in 10 years time we could see self-driving trucks on motorways.  According to them, transport efficiency will increase. Furthermore, traffic will be much safer for road users and fuel consumption and CO2 emissions will be further reduced.

Autonomous driving is already possible at realistic speeds and in realistic motorway traffic situation. The Mercedes-Benz Future Truck 2025 provides a glimpse of the future shape of trucks. It is important to mention that this is not a future truck. But rather a key element in the interconnected transport system of the future. This project is part of the Daimler Trucks initiative – “Shaping future transportation”. The prototype has already demonstrated the capabilities of Future Trucks 2025. It happened back in the summer at speeds of up to 80 km/h in realistic traffic situations.

Regarding the exterior, it features the Mercedes-Benz signature style. It comes with a design composed around the star as the central element with no headlamps. It looks seamless as if it was of one piece, with a plain yet powerful appearance. When the engine starts, the future truck 2025 comes to live. The LEDs illuminate the surfaces, light up the paintwork and when the truck is driving autonomously, the color of lights changes from white to blue. 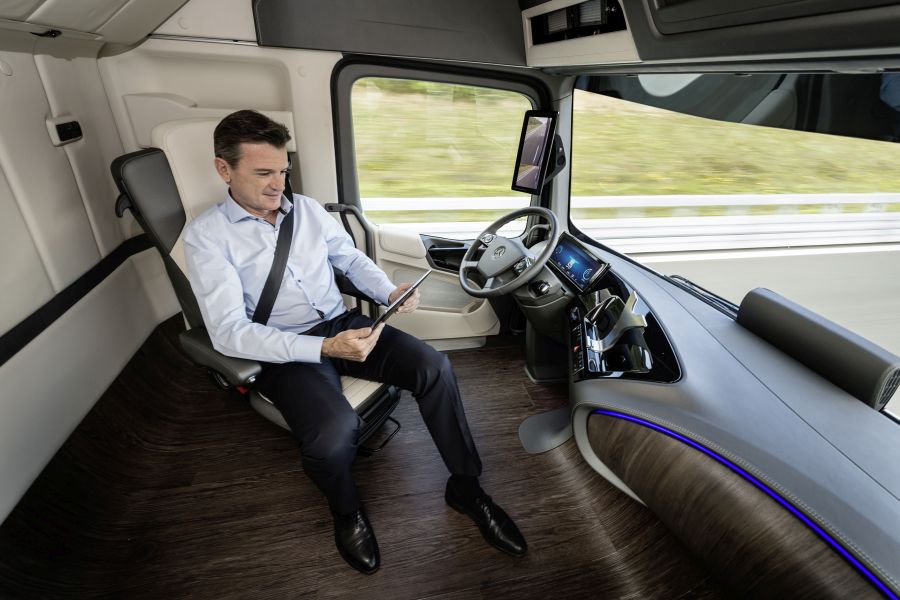 The flowing lines of the exterior continue inside the cab. At the interior we find a calm and uncluttered workplace of driving, just like a modern office on wheels. Furthermore, the exciting lights inside the cab highlight the ravishing character of Future Truck 2025. The driver feels at home in the truck even when it is on the move and despite all the efficiency and functionality, the high-tech truck also shows emotion.

All the sensors on board provide a complete image of the surroundings as all the moving or stationary objects in the truck’s vicinity are being registered. During the autonomous driving, the fuel consumption and emissions are significantly lower thanks to the more homogenous traffic flow. And in the future, accidents that human error causes, will be a thing of the past. But autonomous driving will not happen from one day to another, because, first of all, the legislation has to be adapted to this new way of driving and this takes a lot of time.

A few benefits of the autonomous driving are: the better use of the infrastructure thanks to more flexible traffic systems, the avoidance of human error will reduce accidents, transport operators will operate more cost-effectively and truck drivers will be able to assume different tasks as transport managers. This is the answer to many challenges and it’s not just a vision, but already a reality.