There are only few Mercedes-Benz 300 SL Gullwing left out there. And even fewer are restored to perfection. But this one has come a long way to makes the difference.

Only 3.258 units saw the light of day. They were sporty, they breathed elegance, they were powerful and spectacular with their doors shooting upwards. They also came with an innovative propulsion system, being one of the first automobiles in history to use a mechanical fuel injection. A genuine masterpiece from every single perspective.

One of those units built more than 60 years ago recently went through a major makeover. Thornley Kelham worked their magic on the model. There was only one thing the owner asked: “Restore it to its original specification”. Two things, actually. He demanded for anything but silver. Silver was the original paint of the body. So the automobile turned out to be light blue. 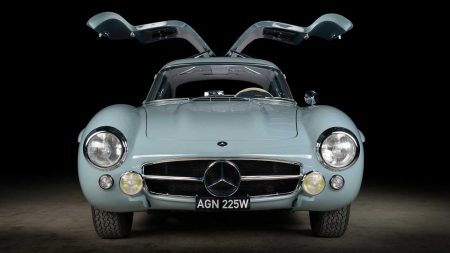 That was the only brief they received. With the owner being highly knowledgeable and critical experienced collector, there was only one thing to do. Follow the order in every detail.

The strip down showed that, following several accidents, that coupe had suffered damages on the damaged the front end of the coupe, it had to be fixed with Roadster parts. They did not have the exact same sizes and they were far from being a perfect match. But the tubular chassis of the car had not been harmed at all.

The 3.0-liter engine also needed fixing, so that is what the Thornley Khelham engineers did. The restoration experts needed to buy several mechanical components, but also a series of small parts, such as the interior lights. All those went as far as an estimated six-figure value.

But the owner is surely happy. His 1957 Mercedes-Benz 300 SL Gullwing was restored to perfection. The original perfection.