EuroNCAP listed Europe’s safest cars in their class. The new Mercedes-Benz CLA is among them, with an impressive score achieved when tested in September 2019.

The European authority EuroNCAP tested no less than 55 new cars last year, granting 41 of them with five stars. EuroNCAP set up the ranking of the safest of them, based on the score achieved by them. Thus the Mercedes-Benz CLA, tested last September, during the same session with the GLB, was designated the safest small family car, followed closely by Mazda 3.

EuroNCAP: Mercedes-Benz A-Class is the safest car of 2018

Rival company BMW put their mark on the ranking, with the BMW 3 Series leading in the ranking of the large family cars. The podium was rounded off by the electric sedan Tesla Model 3 and by Skoda Octavia. 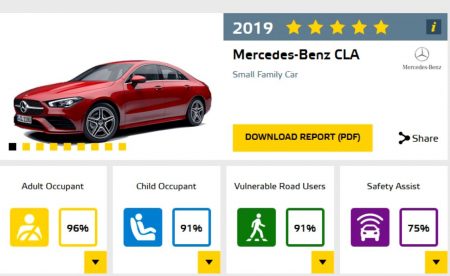 Model 3 also accounted a spot in the “Hybrid & Electric Cars” category, while Model X was selected as the safety leader in the large off-road vehicles segment, followed by SEAT Tarraco.

Another premium brand held a spot in the ranking of 2019: it was chosen to be the safest Supermini, followed closely by Renault Clio and Ford Puma.

Here is the list of Europe’s safest cars of 2019