Hours before it will be officially revealed, we bring you the official photos of the 2019 Mercedes-Benz G-Class! Not much has changed about the legendary off-roader in its 4-decade lifetime. The longest lasting model of the Mercedes portofolio stands its ground and keeps its DNA. So here it is, in all its boxy glory!

In 1972, when the Australian army ordered a fleet of Geländewagen, no one would even dare to dream that one day, the tank on wheels would become a civilian vehicle. Yet, in 1979, it did. From that moment on, the story that started with “once upon a time” had the chance to end with “it lived happily ever after”. And ever after it seems to live, as it is the longest lasting model that Mercedes-Benz has ever sent onto the road.

THE ENTIRE HISTORY OF THE G-CLASS IS HERE: 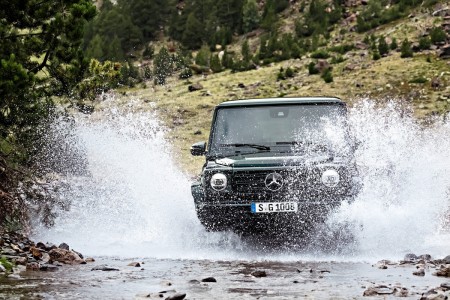 The 2019 Mercedes-Benz G-Class is set to be revealed in a couple of hours at the first year’s motor show, in Detroit. Before it hits the stage in Detroit, the all-mighty G has leaked online. It is now longer by 5 centimeters and wider by almost 12, yet, the use of a new platform brings a 170-kilogram diet, thanks to a brilliant mix of lightweight materials such as high-strength, ultra-high-strength steels and aluminium, as well as an improved manufacturing processes at the Magna Steyr plant in Austria. The rigid body shell is now made of a variety of steel grades, while the wings, bonnet and doors are entirely sculpted in aluminium. All these make the G more dynamic and reduce noise level and vibrations on the road.

The cubic SUV now standardly gets the LED lighting, but keeps the prominent round headlights. The turn indicators keep their position on top of the hood as well. The spare wheel still garnishes the square rear. 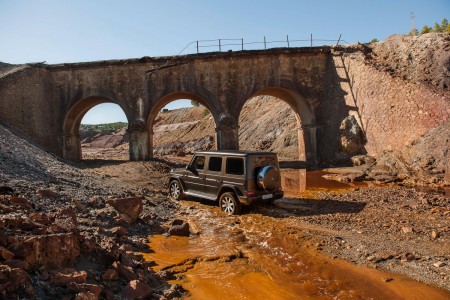 Not a hard-core off-roader, the critics slammed it, after the first test drives with the camouflaged car were detailed. The vamped-up G is now indeed a luxurious and extravagant means of transportation, meaning to pamper its occupants with its interior wrapped in leather, new air vents, a new multimedia system and all the plush details that have already been revealed. But as a pure-blooded off-roader, the vehicle keeps the grab handle in front of the front passenger and the chrome-highlighted switches for the three differential locks. For those who’d rather go for the original, the interior of the G retains the round classic instruments as standard. Yet, the influence of the upper class sedans provides the car with a virtual instrument cluster, and, as an option, with two 12.3-inch displays under a shared glass cover. Drivers can now choose from three different styles of display: “Classic”, “Sport” and “Progressive”.

Fitted with an independent suspension at the front and with a multilink suspension at the rear, the invincible G gives the driver the illusion of taming. And taming is what the G-Mode will do, the driving mode that adds to the already familiar ones, such as Comfort, Eco, Sport and Individual of the DYNAMIC SELECT system, that adapt the characteristics of the engine, transmission, suspension, steering and of the assistance systems. It is one especially designed for rough terrain, the reason that the G-Class came into this world decades ago. It is engaged once the driver taps the low-range button in the center console, and it adapts the steering, the damping and the transmission, deactivating the electronic stability control and avoiding unnecessary gear shifting. Once it is engaged, a tiny “G” icon discreetly lights up in the instrument cluster.  To surpass its previous capability, the G-Class now sports a 24.1-centimeter ground clearance, a maximum fording depth of 70 centimeters, an angle of departure of 30 degrees and an angle of approach of 31. 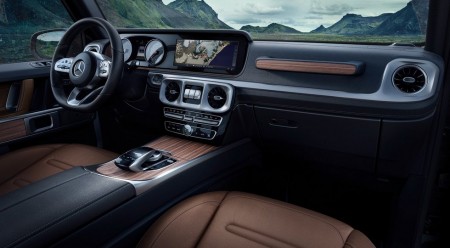 Mercedes-Benz will first send onto the road the G550 version, set in motion by the company’s 4.0-liter biturbo V8, capable of sending 422 horsepower and a torque of 610 Nm to all wheels via a 9-speed 9G-Tronic automatic transmission, especially configured for the new G-Class.

Later update: The Mercedes-Benz G-Class proved its off-road capabilities right on the stage at the Detroit Motor Show. Watch the live presentation of an icon in the video below: