The second generation Mercedes GLE and the fourth generation of the big class Mercedes SUV is a completely new car with an innovative active suspension system named E-Active Body Control, a new 4Matic system for the versions with 6 and 8 cylinder engines and a further developed MBUX multimedia system with gesture control. Plus the option for a seven seater configuration.

In 1997, Mercedes founded the premium SUV segment with the launch of the M-Class W163 which was the star of the famous movie The Lost World: Jurassic Park (1997).
The second generation W164 was released in 2005 and the range was completed with the seven seater GL.
The third generation W166 arrived in 2011 and after the facelift from 2015, the name was changed in GLE and the SUV-coupe version C 292 was launched.

The fourth generation W167 will be presented to the public at Paris Motorshow (4-14 october) and will arrive in dealerships at the beginning of 2019 in USA and Europe and in spring 2019 in China. The GLE will continue to be produced in the Mercedes factory from Alabama, USA.

The front part has an upright radiator grille in an octagonal SUV interpretation, the prominent chrome plated underguard anfd the bonnet with two powerdomes. The A-Pillar is more upright than before allowing a better access to the front seats. 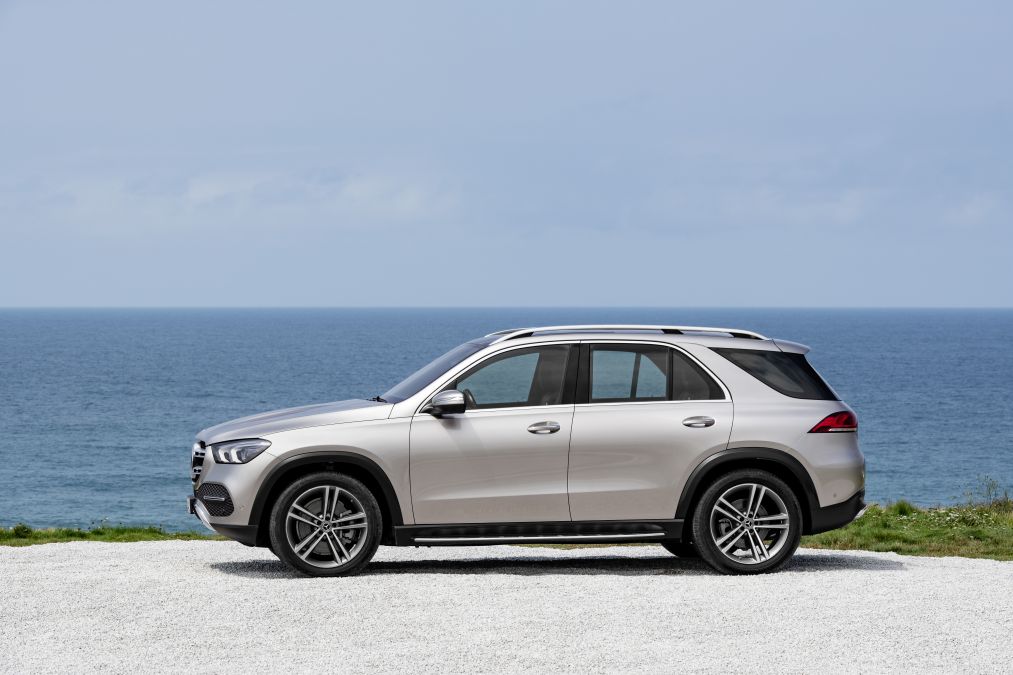 Viewed from the side, the wide C-pillar traditional to ML since the 1997 first generation shows a strong appearance while the large wheels in size from 18 to 22 inches are housed in wheel arches with prominent liners. The chrome surround of the windows are a must in the premium segment.

Like in the A-Class, the rear lamps are divided in two parts and are thinner while the chrome plated underguard gives a strong presence.

The new GLE has a Cx figure from 0.29, the best in segment, compared with 0.32 for the previous model. To reach this record level of 0.29, Mercedes engineers has taken some measures like optimized exterior mirrors, mounted an additional wheel spoilers ahead of the rear wheels and  incapsulated the large area of underbody.

The new GLE is available for the first time with the option for seven seats. The passengers from the third row can reach their position very conveniently thanks to the Easy Entry function of the fully electrically adjustable second seat row.
The new Mercedes GLE is the first SUV in the world which features as an option a second seat row with six fully electric adjustments. The rear seat adjustments are controlled using a switch in the door panel – a traditional Mercedes solution used for the front seats. The left and right seats in the second row can also be separately adjusted fore-and-aft by up to 100 mm, while the backrests are adjustable in different angles and foldable in a 40/20/40 ratio.
The interior space is more generous thanks to a longer wheelbase of 2,995 mm (plus 80 mm). Thus, the legroom in the second row has increased by 69 mm to 1,045 mm. Headroom was also increased by 33 mm to 1,025 mm.

Mercedes does not mention yet the general dimensions and do not give any informations about the positioning of the future GLS generation. But we expect that the future GLS will offer much more luxury and will attack the Bentley Bentayga.

The new Mercedes GLE comes standard with two large displays of 12.3 inch which forms a continuos huge display. The instrument cluster can be configured in four different styles: Modern Classic, Sport, Progressive and Discreet. The media display can be controlled also by touch. 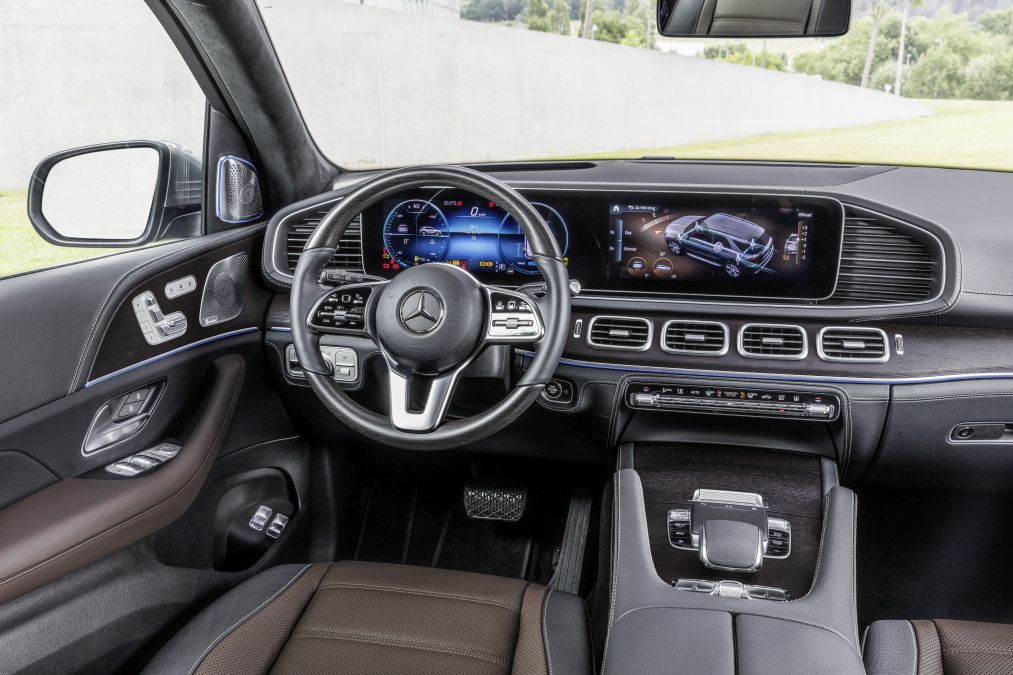 New is the optional MBUX Interior Assist which allows operation of different comfort and MBUX functions by movement of the hand by the driver and by front passenger.

The system is able to distinguish the driver’s hand from the passenger hand and therefore knows for whose seat the massage function is to be activated.

The MBUX Assist has much more functions than the gesture control from BMW. The system can control many different MBUX functions, the seat functions but also can switch on and off the reading lamp by extending a hand towards the rear view mirror.

On the other side, the MBUX incorporates 40 new functions including support for off-road specific driving modes (free driving mode), extended off-road displays, integration of online music (TIDAL) in Europe.

The intelligent voice control with natural language comprehension has also been improved and is activated by the keyword Hey Mercedes.

Like in the A-Class, the navigation system has a very interesting feature named augmented reality. For example arrows and house numbers are automatically superimposed directly onto the image in the media display.

Completely new is also the head-up display with a 720 x 240 pixels full colour measuring around 45 x 15 cm onto the windscreen.

The new Mercedes GLE will start with the GLE 450 4Matic version which use the completely new inline six cylinder with 48V technology. The six cylinder engine develops 367 HP and 500 Nm, supported by an electric engine with 22 HP and 250 Nm for short periods. 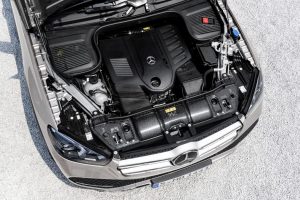 The integrated starter/alternator recuperate the energy during braking and stores it in a small battery. The energy is used after by the electric engine to support the thermal engine under acceleration and thus reduce the fuel consumption.

Other engines will follow. On the list are the new inline six cylinder diesel engines with 286 and 340 HP and a Plug-In Hybrid version. A four cylinder bi-turbo engine is also on the pipeline.

The new optional E-Active Body Control suspension in combination with the also newly developed Airmatic suspension offers even better ride comfort and agility plus new functions.
This is the only system in the market where the spring and damping forces can be individually controlled at each wheel.

The level of each level can be adjusted via the touchscreen of the media display improving dramatic the off-road abilities for example when one wheel is stuck in a ditch or when a wheel spring is fully contracted.

The E-Active Body Control suspension replaces the function of many systems and not only counteracts body roll (the function of the Active Curve System from the former GLE) but also pitching and squat and with Road Surface Scan (if a stereo multi-purpose camera is configured) and the curve inclination system Curve (the GLE leans into bends and allows cornering in three stages with practically no centrifugal force) offers an extraordinary level of comfort. 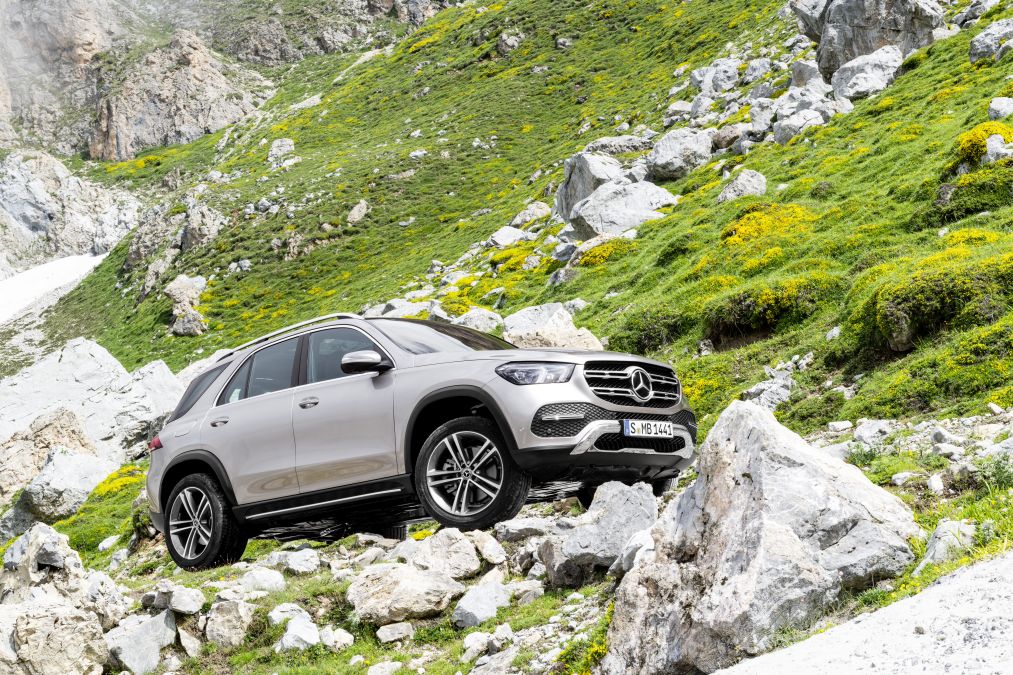 The Mercedes GLE comes standard with a new steel suspension and the clients have two options: the also new Airmatic suspension with the Adaptive Damping System Plus and the E-Active Body Control available only for 6 and 8 cylinder versions.

The E-Active Body Control was developed in-house by Mercedes and use the 48V voltage. In off-road, the system is able to recuperate energy and has a revolutionary free-riding mode which allows to raise and lower the suspension level automatically, changing the ground pressure of the tyres and therefore improves traction to get out from a critical position like a sand dune for example.

In the following movie you can see how it function this revolutionary suspension.

When the Active Distance Assist Distronic with route based adaptation is activated, the new GLE is able to recognize and respond to tailbacks or slow moving traffic with the help of information from LiveTraffic even before the driver becopmaes aware of the hazard. As a precaution, the Distronic reduce the speed to around 100 km/h which allows the Active Brake Assist to brake safely the vehicle to a standstill if is necessary.

Active Stop and Go Assist can assist the driver in the tailbacks maintaining the safety distance at speeds up to 60 km/h and the system can start again even after up to one minute after coming to a stop.

Completely new is the turning-off function of Active Brake assist and the Active Blind Spot Assist with exit warning, the last one recently launched on the A-Class.

For the people who need to transport a boat or a camper, Mercedes offers as a premiere for the german brand a Trailer Manoeuvring Assist.