In another attempt to unsettle the German supremacy when it comes to performance sedans like the BMW M5 and Mercedes-Benz E63 AMG, Lexus has come up with this: the GS F.

Although the performance model is bound to debut later this month in Detroit, during NAIAS 2015, the first batch of pictures and official information has been revealed by Lexus ahead of the big launch.

The GS F, as the name suggests, is built on the standard GS model and Lexus decided it was best if the performance sedan used the same naturally-aspirated 5.0-liter V8 which powers the Lexus RC F. 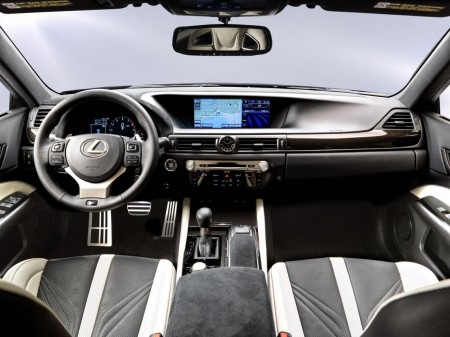 That being said, you probably noticed by now how the GS F stands from the crowd thanks to the cheeky design implemented by the Lexus designers. In that respect, the GS F received a huge front grille plus a pair of redesigned bumpers both in front and at the back, quad exhausts, flared wheel arches and a carbon fiber lid spoiler.

In addition, potential clients will also get 19-inch rims, a sport-tuned suspension system and a Torque Vectoring Differential with three different modes (standard, slalom and track), all available as standard equipment. Inside, Lexus GS F receives a two-tone leather interior with Alcantara inserts, carbon trims and two front sport seats, inspired, as you already guessed, from the RC F.