Dream cars – The new S-Class Coupe and Cabriolet are here

The new Mercedes-Benz S-Class Coupe and S-Class Cabriolet are making their first steps on solid ground. The coupe and convertible are to benefit from the same extensive innovations that the saloon received. New or functionally considerably extended driving assistance systems, modern control and display concept with the Widescreen Cockpit and the new steering wheels are on the list, as well as the high-end OLED tail lamps.

The cars are set to make their debut at the Frankfurt Motor Show next week, in the company of a new V8 biturbo engine, that shall find room under the hood of the S 560 Coupe and S 560 Cabriolet, to make the cars more dynamic and more efficient than ever before. 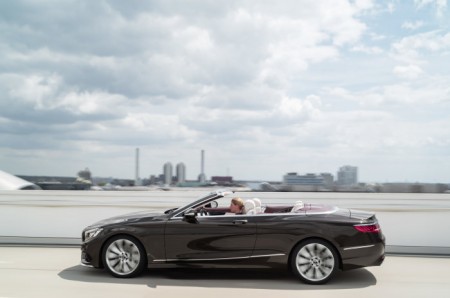 The S-Class Coupe and Cabriolet sport front aprons with chrome-plated splitter and massive air inlets. The dynamic looks are enhanced by restyled side skirts and chrome-plated twin tailpipe trims with a V12 look.

The AMG Line trim also features a more aggressive look, with new front and rear aprons. Especially striking at the front end are the large three-dimensional air inlets, which each include two chrome-plated fins. 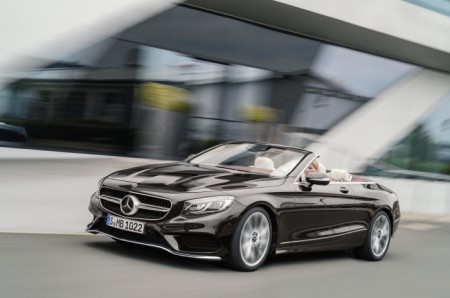 The new models come with three new trim lines (high-gloss brown burr walnut wood, satin-finish grey ash wood and flowing lines designo magnolia wood) as well as three new upholstery lines (designo Exclusive nappa leather AMG Line Plus porcelain/tizian red, designo Exclusive nappa leather porcelain/tizian red and designo Exclusive nappa leather AMG Line Plus Bengal red/black). The new S-Class models now bear the two new high-resolution dual displays, each with a screen diagonal of 12.3 inches, like in the facelifted sedan. Both models have Touch Control Buttons on the steering wheel. They respond to swiping motions like the screen of a smartphone, enabling the driver to control the functions of the instrument cluster and of the entire infotainment system without having to take hands off the steering wheel. The infotainment system can also be operated via the touchpad with controller in the center console and by LINGUATRONIC voice control. 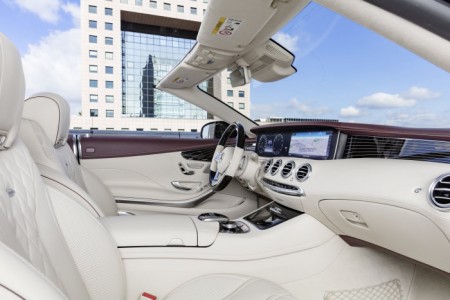 The S-Class Coupé and Cabriolet are going to the next level in terms of autonomous driving with the Intelligent Drive driving assistance systems. Active Distance Control DISTRONIC and Active Steering Assist now provide even more comfortable support for the driver to keep a safe distance and steer. The speed is now adjusted automatically ahead of bends, junctions or roundabouts. 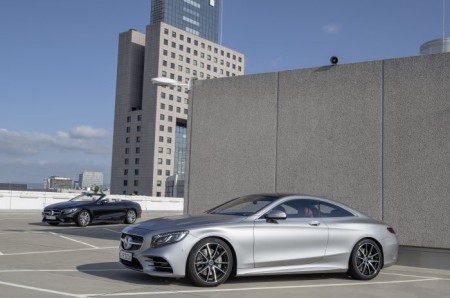 Back in 2014, in the S-Class Coupé, the optional MAGIC BODY CONTROL suspension with curve tilting function was a world first in a standard-production car. The body tilts to the inside of the turn by up to 2.65 degrees, thus reducing the transverse forces perceived by the passengers. In the new S-Class Coupé, this suspension control is further improved: the system’s new stereo camera has a much better performance and works at speeds up to 180 km/h. The S-Class Cabriolet is standardly fitted with the full-support AIRMATIC semi-active air suspension featuring infinitely variable damping control. 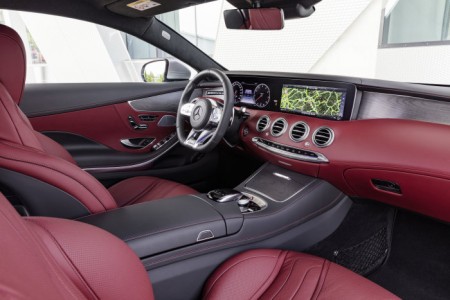 The cars are now more efficient than ever, as the new V8 biturbo finds rooms under the bonnet of the S 560 Coupé and S 560 Cabriolet, as the world’s most economical V8 petrol engines. In order to provide better fuel consumption figures, four cylinders of the new V8 are deactivated simultaneously under partial load with the help of the CAMTRONIC valve-lift adjustment system (Coupé only). The new V8 has a maximum output of 469 HP, developing a maximum torque of 700 Nm.

The Coupé powered by the V6 petrol engine, sporting an output of 367 HP, now goes by the name of S 450, featuring the 9G-TRONIC automatic transmission and a petrol particulate filter.