The stage is going to fill up with stars next week in Frankfurt. And the ones accompanied by the AMG logo are going to be supported by the Panamericana radiator grill. This is how the story begins for the S 63 4MATIC+ Coupé and Cabriolet, powered by the AMG 4.0-litre V8 biturbo, replacing the former 5.5-liter V8.

We have grown used to the idea that there is no replacement for the displacement, but Mercedes-AMG has found the way out of it. Despite the smaller displacement, the new engine puts out 612 horsepower, 27 more than the preceding model. The AMG SPEEDSHIFT MCT 9G transmission is also new to the Coupé and Cabriolet, as is the fully variable all-wheel drive system AMG Performance 4MATIC+. 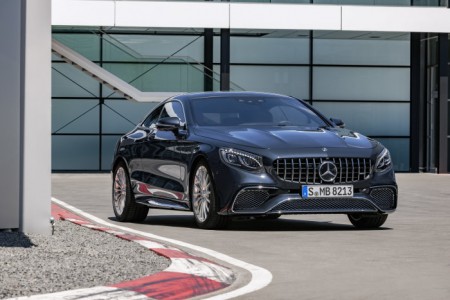 The brandnew Coupé and Cabriolet, S 63 and S 65 have received a visual update, now sporting the Panamericana radiator grille. The AMG 6.0-litre V12 biturbo engine keeps its ground at 630 HP and a maximum torque of 1000 Nm.

The all-new AMG S-Class Coupés and Cabriolets can be identified in a heartbeat, as they sport the new AMG Panamericana radiator grille with vertical chromed struts. Attention also focuses on the large forged light-alloy wheels, measuring 19 inches as standard on the S 63 4MATIC+ Coupé and Cabriolet and 20 inches on the S 65 Coupé and Cabriolet with a super attractive design for the V12 models: each of the 16 spokes twists in a special way so that the light-catching contours radiate to the center of the wheel hub, making wheels seem larger than they actually are. 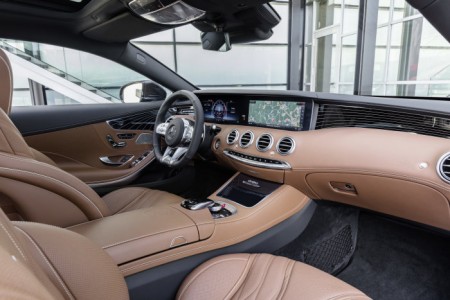 From the rear, the S 63 4MATIC+ and S 65 are also easy to recognize, as they feature an updated rear apron with diffuser insert and the redesigned, model-specific twin tailpipes of the AMG exhaust system.

New and exclusive additions to the Coupé and Cabriolet are the OLED (organic light-emitting diode) rear lamps, with their thin-film design, which allows curved surfaces to be created, resulting in totally new light designs. A total of 66 OLEDs (33 left and 33 right) produce an unmistakable light signature, combined with a Coming Home function. 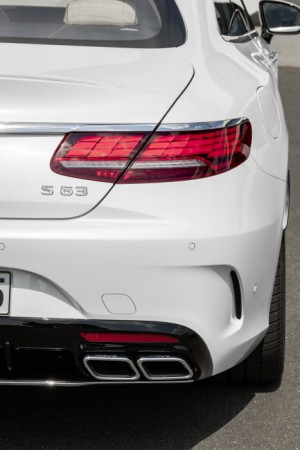 Other stand-out features of the AMG S-Class Coupés and Cabriolets include the numerous high-sheen chrome design elements (S 65) on the front, sides and rear. These are particularly effective in contrasting combo with dark paint colours.

The stylishly sporty personality of the new S-Class overflows inside. Seats with memory function and seat heating offer the driver and front passenger more lateral support. Nappa leather and AMG badges in the front and rear seat backrests create an exclusive atmosphere on board. Special touches include the embossed emblem on the armrest of the front centre console and the analogue clock in exclusive IWC design, which features three-dimensional, milled metal hands and genuine metal appliqués on the face. 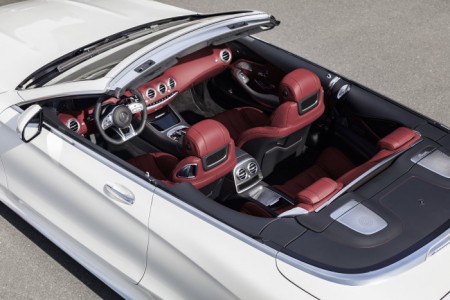 The three-spoke Performance steering wheel hides the paddle shifters, a distinctly contoured rim trimmed with perforated leather in the grip area, and a metal insert with AMG logotype. It is optionally available made of black nappa leather/DINAMICA microfibre.

The 31.2-centimetre TFT wide-screen colour display reproduces round dials that reveal data on engine speed, vehicle speed and various other. The driver can select between the “Classic”, “Sport” and “Progressive” design. The AMG menu has been considerably expanded, as it can now display the engine and transmission oil temperature, lateral and longitudinal acceleration, engine output and torque, boost pressure, tyre temperatures and pressures as well as the current vehicle set-up.

For the first time, the S 63 4MATIC+ Coupé and Cabriolet have been fitted with the AMG SPEEDSHIFT MCT 9G transmission, which provides extremely short shift times, lightning reactions to shift paddle commands, a double-clutching function and fast multiple downshifts. A wet start-off clutch replaces the torque converter of the production model, saving weight and improving response to the driver’s accelerator pedal input. It also allows the RACE START function. 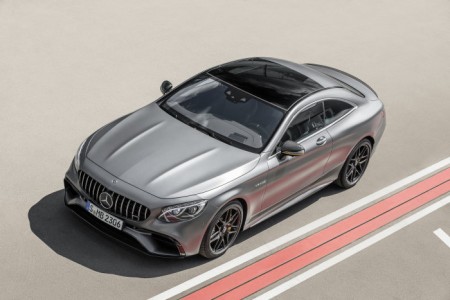 The extremely high torque of the S 65 Coupés and Cabriolets is transferred by the tried and trusted AMG SPEEDSHIFT TCT 7G transmission.

The S 63 4MATIC+ Coupé and Cabriolet and the S 65 Cabriolet are fitted with the AMG RIDE CONTROL+ suspension with adaptive damping adjustment, that can be preset to “Comfort”, “Sport” and “Sport Plus”. 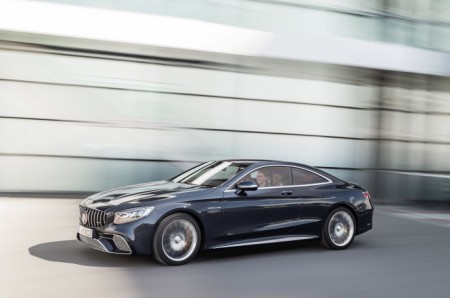 For further comfort, the S 65 Coupé’s exclusive AMG ACTIVE RIDE CONTROL suspension prepares the vehicle for bumps in the road surface, before it even drives over them, as the system combines the active springs of the suspension with continuously adjustable dampers, scanning the road ahead with the help of a stereo camera. The standard curve-tilting function tilts the vehicle to the inside of a turn by up to 2.65 degrees, reducing the perceived lateral forces.

The car can gain an extra ground clearance of 40 mm, while at high speed, it lowers itself by up to 15 mm, for lower drag and superior driving stability.

There are four different driving programs that can be selected via the AMG DYNAMIC SELECT: “Comfort”, “Sport”, “Sport+” and “Individual” give drivers extensive influence over the new models’ characteristics. Each of them acts on engine, transmission, suspension, steering, ESP® and all-wheel drive in the S 63 4MATIC+ Coupé and Cabriolet. 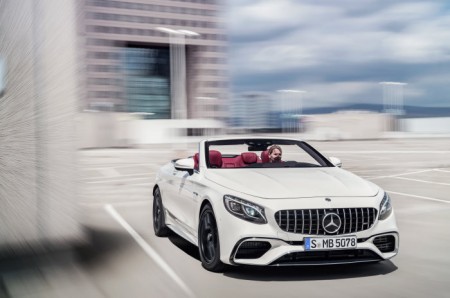 The S 63 4MATIC+ Coupé and Cabriolet also feature the “RACE” drive program, while the S 65 Coupé features the drive program “Curve”, active in a speed range between 15 km/h and 180 km/h. A curve inclination function is integrated in the MAGIC BODY CONTROL suspension.

For more drama on the road, the S 63 4MATIC+ Coupé and Cabriolet are fitted as standard with the controllable AMG Performance exhaust system. The adjustable flaps modulate the exhaust note authentically and directly, as they open or close, depending on the selected AMG DYNAMIC SELECT driving mode, but can also be controlled individually with a separate button in the AMG DRIVE UNIT on the centre console.

The cars offer plenty of customizing possibilities. With the AMG Track Pace, motor racing enthusiasts can record a range of vehicle data and lap times on the race track. Figures are shown by the COMAND display.

The Exclusive Yellow Night Edition of the S 63 Coupe, available in the S 63 4MATIC+ Coupé (left-hand drive only) and S 63 Coupé (right-hand drive only), is an offer valid for a period of six months. The special model comes painted in a choice of selenite grey magno or night black magno. It sports 7-spoke light-alloy wheels in black with high-sheen rim flanges and the yellow-painted brake callipers of the AMG high-performance composite ceramic braking system, which is standard equipment for the Edition 1. It also features the Aerodynamic package with an enlarged front splitter in high-gloss black (in carbon-fibre with Carbon Fibre package) and a spoiler lip in high-gloss black (in carbon-fibre with Carbon Fibre package) on the boot lid, as well as AMG racing stripes (decals) on the vehicle flanks. 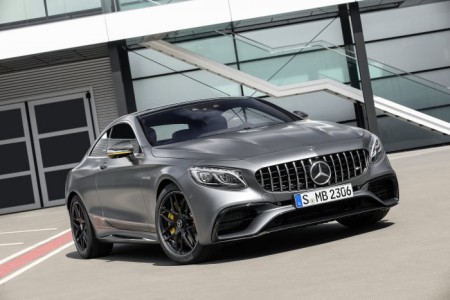 The interior also features yellow accents on the AMG sports seats in the front and on the rear seats, the AMG Performance sports steering wheel with 12 o’clock marking, the dashboard, the beltline, the centre door panels, the armrests, the centre console front and rear and the floor mats. The Edition badge in the steering wheel bezel draws attention to the special equipment. AMG matt carbon fibre/black piano lacquer trim parts round off the refined and sporty look.

The high-performance Coupés and Cabriolets will dress in their ball gown to celebrate their world premiere at the International Motor Show (IAA) in Frankfurt, September 12th, 2017.