Bonsoir, Paris! Away in a CLA Shooting Brake

We can almost hear the songs of Joe Dessin. But in Paris, the Mercedes-Benz CLA Shooting Brake ignores the vintage rhythm. It has a pace of its own, where history and contemporary stand face to face.

The CLA Shooting Brake cruises smoothly in the City of Lights. Being the cradle of history and the capital of fashion, Paris oozes with the atmosphere so familiar from our Victor Hugo novels and from “Amelie”. 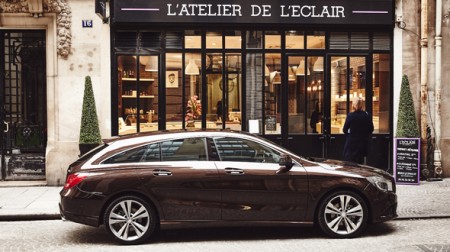 Classy as the French eclairs and macarons, strong as the iron frames of the Tour Eiffel and elegant as Coco Channel herself, the CLA hits the main sightseeing places and becomes one itself. Under the arcades of history, it captures the contemporary moments together with the Mercedes-Benz team, who takes a break to taste the French cuisine. The Parisian Panorama from the Japanese-French restaurant Le Kong is breath taking. We now understand why the producers of “Sex and the City” took Carrie Bradshaw here for an on-screen lunch.

At night, the city displays shiny images run in slow motion. The Mercedes-Benz team makes a stop at the famous Moulin Rouge for a photo session against the background of the world cabaret house. 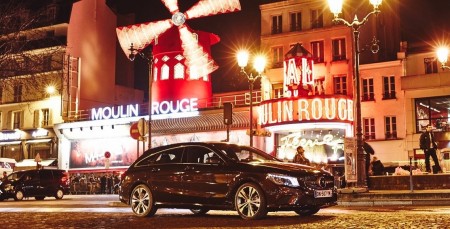 The city break in Paris is only one stop of the few that the CLA Shooting Brake will do around the biggest cities of the world, like Frankfurt – standing for connectivity, Paris – standing for interior design, Barcelona for exterior design, Milan for driving dynamics, Brussels for comfort and Tokyo for safety. Galleries, bars, restaurants, fashion venues or concept stores are the targets of the Mercedes-Benz CLA Shooting Brake “City Hunter”.

Always in touch with the heartbeat of the city and ready for the next adventure, the car is labeled to be un “urban hunter”, referring to urban jungles and evoking dynamic lifestyle. And so says the TV commercial for the German car, which stars no other than the Mercedes-AMG Formula 1 driver, Nico Rosberg.

And going back to Paris, as Joe Dessin says: “Et si tu n’existai pas…”, somebody should have invented the CLA Shooting Brake. Lucky for us, Mercedes-Benz has already done it.