Spain F1: Is it Rosberg’s comeback?

Nico Rosberg breaks Lewis Hamilton’s 4-victory series and shows signs of being able to return into the championship title fight. Vettel comes in behind the two Mercedes drivers, despite running in the second position half of the race.

There was no better moment for Nico Rosberg’s victory. Grated on the nerves by the pressure of the second position in the squad and several races cluttered with errors, the German trades on Hamilton’s less successful weekend and achieves first triumph of the current season. On paper, things were quite simple: a pole start, a race comfortably mastered and a result that gets hopes back up for the runner up. But is this a true comeback for Rosberg?

His number one opponent, Lewis Hamilton came into a defective start. By the end of the straight, the Brit is overtaken by Vettel and his mission is turning more and more difficult every lap. His pace did not let him pass the German’s Ferrari and the tactics crew in Mercedes decides it’s better to switch strategy. The decision also follows an attempt to change tires faster, trying to take him up to the second place. But an error of the mechanics crew comes with a 3-second price for Hamilton and he is locked behind the very same Vettel. The only way out was switching into a 3-pit strategy.

Ferrari does not give away the 2-pit plan and, following Hamilton’s third pit, they are robbed of their second position. The ruling champion strings fastest laps series, but those proved to be insufficient for catching up with Rosberg. The German is the first to cross the finish line and is waiting for positive radio feedback thrown by the team. His mild display of joy from the awarding ceremony somehow mirrors the weekend that has just come to an end. Rosberg barely got first pole and first victory in the fifth race, all others being ticked by Hamilton. The German’s pace doesn’t seem to have gone through a major upgrade and only an ineffective performance series of his opponent allowed him a loose act. This or Nico will keep on proving in the upcoming races that he is not settling for the part of coming second in the Mercedes squad. 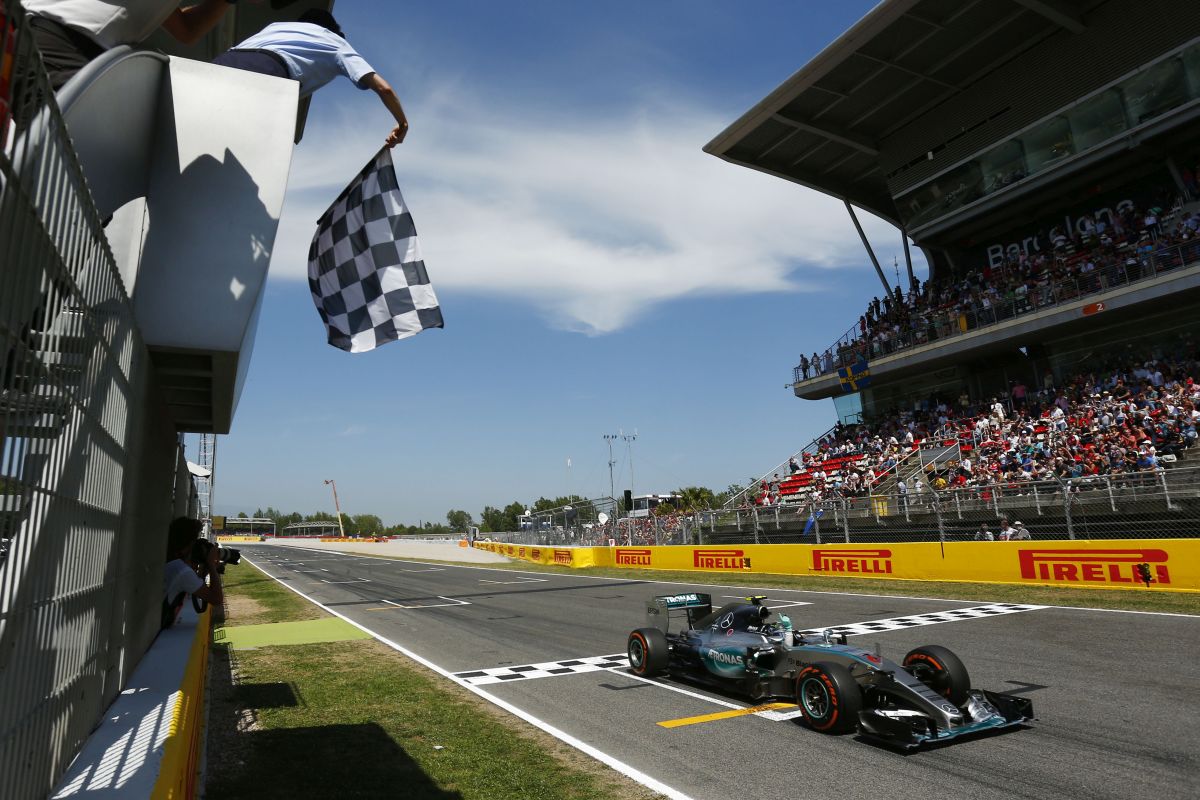 Far behind the battle for the podium, there comes Valtteri Bottas. In a Finnish duel, the Williams driver gives an epic resistance to Raikkonen’s inroads during the final laps. Behind Kimi, Felipe Massa rounds up the lot of the 6 racing cars that finished the race in the same lap as the winner, thus outlining the duel for the Ferrari-Williams “best of the rest”. Daniel Ricciardo manages to come in the 7th position despite technical malfunctions, while Romain Grosjean finishes 8th. The French came into a race during which he was bound to protect his gearbox, which failed him in the first laps. Probably also impacted by a braking system malfunction, Grojean could not stop at the pits in time and injured the front jack man. But there was nothing that a bag of ice couldn’t save.

Carlos Sainz comes to the fore in his home race and finishes 9th, after a wheel-to-wheel battle with Daniil Kvyat in the last lap. The Spaniard took on the fight aggressively in the end of the straight, but the officials did not dictate any penalty for him. Max Verstappen could not enjoy such a great race and was thrown back into the 11th position, ahead of Felipe Nasr. The Dutch is thus finishing a disillusioning weekend after he finished the qualifying session the 6th place.

For the failure chapter, we also mark those in Force India. The upgraded version of the new racing car is long in coming for Perez and Hulkenberg, while they finish 13th and 15th in Spain. Even though he was trustfully heralding that scoring points is achievable, Alonso prematurely finished the race due to major malfunctions of the braking system. The concern reasons are coming though from Button, as the Brit stated he had the most excruciating 30 laps of his life. His racing car was completely off-balance and any wind blast caused a massive unhinge to his McLaren. We are therefore having two distinct feedbacks from the two drivers. Alonso was close to scoring his first points in the season, while Button claims there will be no scoring this season.

The ranking is rounded up, as we have already grown accustomed to it, by the two Manor racing cars. Stevens ticks one more victory in his solitary battle at the bottom of the ranking, defeating his teammate, Roberto Mehri.