In the footsteps of Mark Twain, in a Mercedes-Benz 540 K

130 kilometers apart, Carl Benz and Gottlieb Daimler, completely unknown to each other, invented the automobile 130 years ago. As bizarre as it may be, they both lived in the federal state of Baden-Württemberg, sliced in two by the Neckar river, that flows into the Rhine near Mannheim.

In 1878, American writer Mark Twain sailed the Neckar in a raft and the legend says that his story is depicted in the novel “The Adventures of Huckleberry Finn”, which Twain was writing during his journey:  “The Neckar is in many places so narrow that a person can throw a dog across it, if he has one”, Twain wrote. 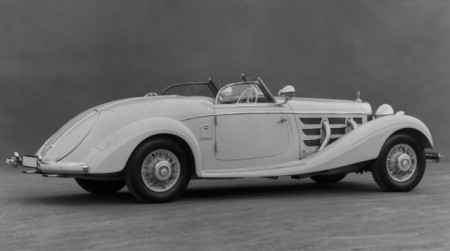 The journey taken in a Mercedes-Benz 540 K follows the path of Mark Twain to Heidelberg. Premiered at the Berlin Auto Show in 1934, the Mercedes powered by an 8-cylinder, 5-liter engine cu 160 HP, was a dream car back then and it was described to be “specially constructed for particularly high speeds” and it came right on time. The first German highway had been inaugurated in 1932.

Hungry for performance, it was the customers that provoked the launch of a car with a bigger displacement, a 5.4-liter model, with the power going all the way to 180 HP, with supercharger, in 1936. 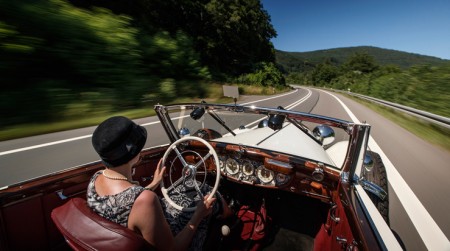 The Cabriolet model that withstood the hands of time now travelled under the command of Sonja Schäfer, to its destination: the castle at Heidelberg. In 1880, Mark Twain wrote of the town at their feet: “One thinks Heidelberg by day – with its surroundings – is the last possibility of the beautiful; but when he sees Heidelberg by night … he requires time to consider upon the verdict.”

Even nowadays, literature enthusiasts and critics are wondering whether it was nothing but a coincidence that the famous American writer named his most popular character “Huckleberry”. In German, that is “Heidelbeere”.