The smart song – smart fans can make their own Christmas carol

About two weeks left to Christmas and smart is inviting all fans to create their own Christmas carol. The smart team has already worked its brand magic on the traditional “Jolly Old Saint Nicholas”, with the Discoball smart as a special feature.

The Discoball smart is completely covered in small, light-reflecting glass panels, and it becomes itself a musical instrument. The backup orchestra is done New Zealand singer and songwriter Graham Candy, who turned his “She Moves (Far Away)” into a world hit.

Fans are invited to submit their Christmas songs up to December 26, at the www.smart.com/christmas and share it on social media or by e-Card. 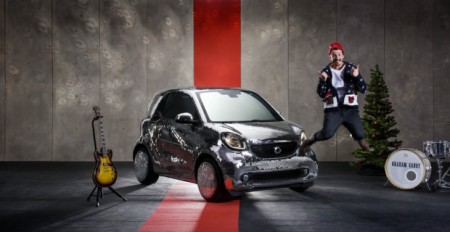 Talented fans can make up their own version of “Jolly Old Saint Nicholas” by using four different sound tracks. For each choice, there is a video of either Graham Candy or the Discoball smart, either of them visualizing the played music.

The smart campaign started on November 26, having massive media coverage. A 20-second teaser video shared on YouTube and Facebook managed to get the public attentions. The film shows Graham Candy and the Discoball smart in a festively decorated sound studio.

In addition to the short video, regular posts with photos, text and links on the smart Facebook pages and YouTube channels encourage everyone to join the Christmas campaign.

And to get the fans ready for Christmas, smart is giving away customized Christmas decorations as gifts.