It may look like a monster, but it is a smooth operator. First experience behind the steering wheel of the Mercedes-Benz Actros 1845, in an enclosed area, on the race track.

From outside, I must admit it seems intimidating. When you are face to face with it as much as when you see it in your rearview mirror, even when driving a G-Class, the company’s tallest car. Its LED headlights, its massive grille, its mirrorless silhouette grant it with the aura of a titan ready to go to war. But everything changes onboard.

I climbed and it seemed three-stories up, holding onto the bars especially made for the support when putting feet up on the steps. The pneumatic seat is easily adjustable by a button on the left side, while you need to press a flap with your foot to adjust the position of the steering wheel. Pretty easy this far.

What seemed strange and unfamiliar is that the footwell is slightly to the right side, but now I know this is very common for vehicles of its kind, but very new to me. 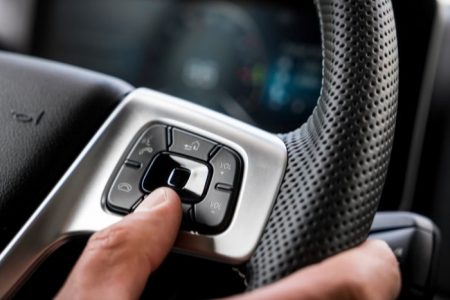 Premiering last year in Hanover, Germany, the new Mercedes-Benz Actros comes with all the features that makes life onboard easier. It is equipped with new Active Drive Assist that converts it into a semi-automated vehicle. The system is capable of braking, accelerating and steering and is active regardless of the speed.

In the digital era, fitted with MirrorCam, the Actros may seem easier to drive than most cars out there, since the system, first time in series production, replaces conventional mirrors, using side-mounted cameras instead. The images are played on two 15-inch displays mounted on the A-pillars inside the cab. The view is wide, natural and can be adjusted according to the length of the truck. Luckily for me, no trailer involved in the process, which, for a rookie as me, would have been next to impossible to guide between the edges of the road at turns.

With better aerodynamics and new technology on-board, Mercedes claims that the fuel consumption is reduced by up to 5% on rural routes and up to 3% on motorways. “It costs more than one thousand euros to fill the tank”, my trainer tells and it makes sense, since the tank of the Actros has a capacity of – depending on the variant – between 540 and 1,300 liters of diesel fuel.

The high-tech cab of the Actros brings a modern atmosphere. The Multimedia Cockpit resembles the MBUX fitted in the Mercedes-Benz cars. The two interactive screens are standard on the truck, providing the driver with the relevant data regarding driving and assistance systems. The driver can connect his smartphone via Apple CarPlay or Android Auto and various apps help him fulfill his transportation tasks. Fleet management can monitor the truck in real time via Fleetboard and Mercedes-Benz Uptime. 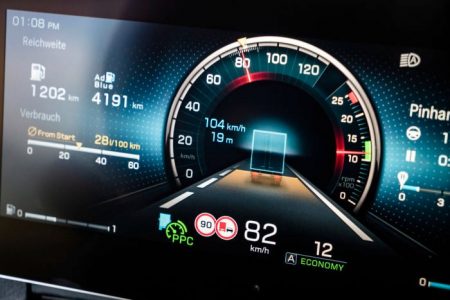 All seems within reach, the ergonomics seems it has nothing to complain about, while the trim keeps its brand-specific premium touch.

But how does it feel to sit up way above the ground, maneuvering a 6-cylinder 12.8-liter OM 471 engine vehicle with 450 horsepower, 2,200 Nm of torque and over 18 tons? It feels like you’re… way above the ground, lightyears away from the asphalt. The Mercedes PowerShift 3 transmission makes it drive similar to a, let’s say, sedan. Or it maybe is just the imagination of a driver that has no idea on trucks.

For a pagan like me, who drove with the speed of a tired snail on a closed circuit, it did not seem that rough, but my trainer must have had his heart in his throat to know that I had never driven such a monster before.

The new Mercedes-Benz Actros may not be a luxury sedan, but it brings all the comfort that a vehicle of its kind had never been granted with before. It may not be a compact car, but high-tech systems, together with the MirrorCam system that replaces conventional mirrors, make it easy to maneuver. It may not be your every day drive, but it is an experience that every driver should try. At least once in a lifetime.