It is far from the first time the C-Class makes use of a plug-in system, but it is the first time this system comes as an electric motor and diesel engine combo. The Germans’ creation almost entirely convinced me. These are the first impressions from behind the wheel of the Mercedes-Benz C 300 de.

Let’s take a while to think of the classical PHEV systems: when do they lose efficiency? Obviously, when the lack of voltage in the battery or when the vigorous push of the throttle pedal make the gasoline engine cut in. What is left to do to raise the system efficiency? There are three things: first – increasing the battery capacity and, implicitly, of the electric range. Second – increasing the electric motor output, making it capable of withstanding more powerful acceleration on its own. And finally, replacing the petrol engine with a more efficient one, in our case – that would be a diesel. Well, the Stuttgart-based experts used the recipe precisely: they took the variant prior to the facelift, the C 350 e, replaced its 6.2-kWh battery with a 13.5-kWh one, brought a 122-horsepower electric motor into the equation, replacing the 82-horesepower predecessor and, most importantly, coupled it to the new 2.0-liter diesel power unit, instead of the gasoline engine with the same displacement. The gearbox did not escape the facelift rush either, but it was replaced with the new 9-speed 9G-Tronic transmission. 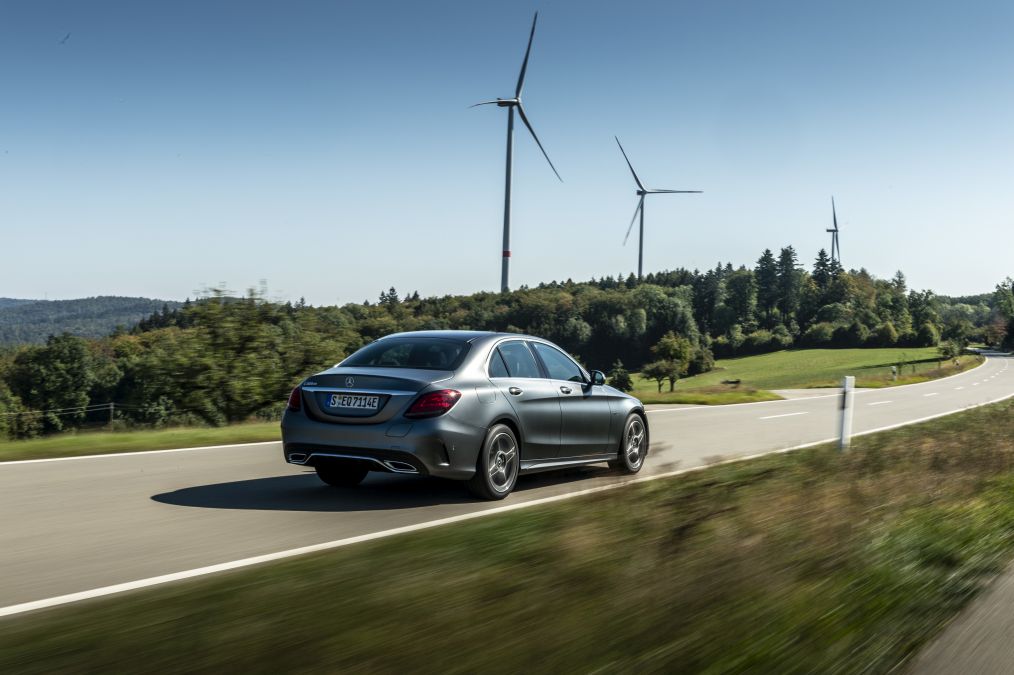 What came out of it? In theory, the increasing of the electric range from 31 to 56 km, the lowering of fuel consumption from 2.4 l/100 km to 1.4 l/100 km, as well as better rallies. In practice, the drive system is very potent and refined. The Germans grant it with 700 Nm, but I actually failed to feel the power sensation that the official figures claim. Though the propulsion also exceeds that of the 3.0-liter turbodiesel engines previously tested.

There are four driving modes: Hybrid, E-Mode, E-Save and Charge. The Hybrid mode enables the system to decide when to call the electric energy and the diesel in, the E-Mode makes predominant use of the batteries, the E-Save saves the batteries current for subsequent use and the Charge mode uses the diesel fuel only, charging batteries throughout driving. Regardless of the mode selected, you are set to benefit from the excellent Eco Assist system, based on the real-time data provided by the navigation system, as well as on the radar sensors and the video cameras, processing the information on the road tilting, junctions, bends and speed limits, monitoring the behavior of the car at the front and the battery charge level. Depending on this information, it decides whether to decelerate, thus charging batteries, or to activate the Coasting feature, cutting off the diesel engine and allowing the car to drive by inertia, without consuming energy, when the Adaptive Cruise Control is on. If the ACC is off, a symbol is shown on the head-up display, warning the driver to release the throttle pedal, allowing the Eco Assist to decide the force of deceleration, thus recovering maximum energy. 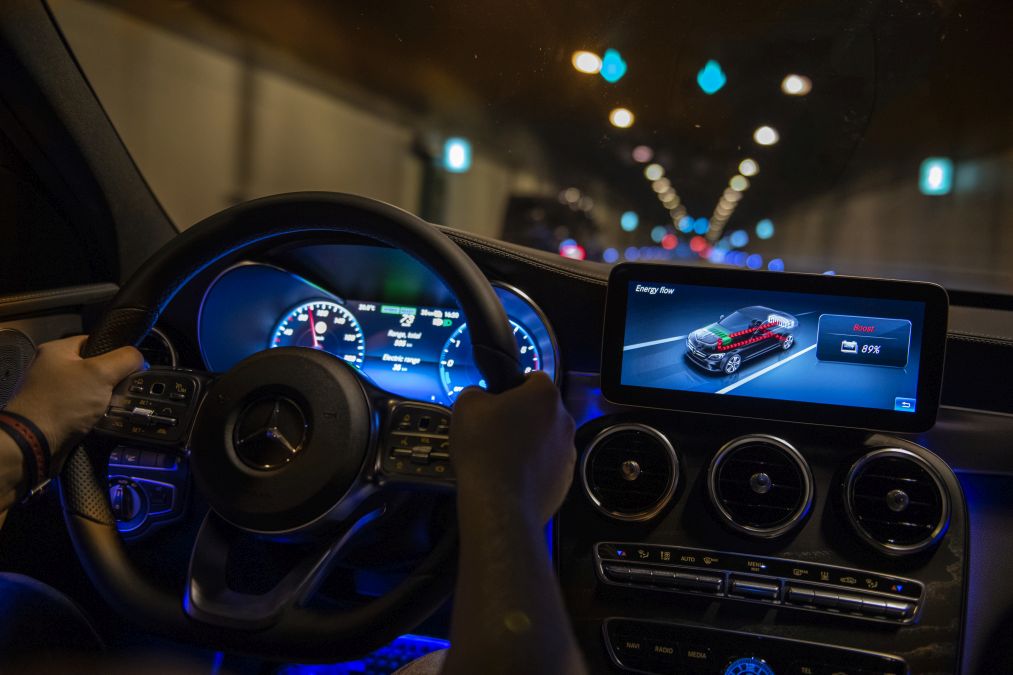 Obviously, the „cleanest” of them all is the E-mode, that maximizes driving with the use of the battery current. I though preferred to use the Hybrid mode, in order to simulate real driving conditions  best. The operation of the drive system in the Hybrid mode is well refined. No matter if you choose to accelerate heavily or brake, the diesel engine cuts in and slips out extremely smoothly. Actually, the feeling would almost be indistinguishable if the typical tone that betrays it, was not be audible. And the diesel tune is obvious, especially following a period of driving in all-electric mode. 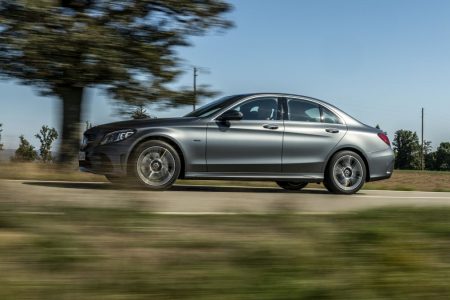 As long as I maintained a speed below 130 km/h, it worked using only the energy in the batteries. The 122-horsepower electric motor is able to also withstand more vigurous throttles on its own, withouth calling in its “diesel sibling”. Regardless of the load, the road holding while accelerating seems excellent, because the weight of the 13.5-kWh batteries (9.3-kWh of which are usable), located in the trunk, presses on the pulling wheels.  Despite the fact that the new battery is manufactured by Daimler subsidiary Deutsche Accumotive, it has a double capacity compared to the previous one, the volume remained unchanged, as the energy density of each cell has grown from 22 to 37 Ah. Thus, even though the Germans gave no hints on the boot capacity, we can estimate, based on the pre-facelifted model, that it features 335 liters, 145 liters less than the classic propulsion models. 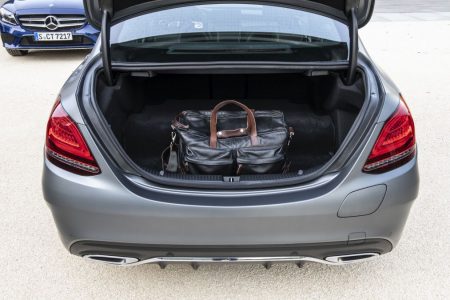 On the road, the car seems to have lost a bit of its agility due to the weight the battery pack added, together with the electric motor. The brakes remained just as efficient on intensive use as well, an indicator that their performance was by no means affected by the additional weight. The weight distribution on axles is better, which increases the rear road holding, with beneficial effects on stability when coming out of bends.

Of course, we are all asking how much the new C 300 de actually consumes. I started off from Stuttgart in the Hybrid mode, with a fully charged baterry and an electric range of 45 km. 57 kilometers of combined route and engaged to sporty driving later, the fuel consumption displayed was of 2.2 l/100 km, plus 15.8 kWh/100 km. I drove in all-electric mode for 44 km and there was current left in the battery for 4 km more. Thus the electric range achieved by us was of 48 km. I drove on for another 70 km, with the battery fully discharged, and managed to achieve a diesel fuel consumption of 4.8 l/100 km, considering that I reached a speed limitless sector of 5 km on the autobahn (where I frequently reached in excess of 200 km/h) and encountered two traffic jams of 5 km each. Under the circumstances, the PHEV  operated as a pure hybrid, charging the batteries on deceleration and driving in all-electric mode at low speeds, where the diesel would take up a lot.

Mercedes-Benz proves that the diesel engine is an excellent solution within a PHEV system. The C 300 de proves to be refined, rapid and, most of all, economical. And the real range that we have achieved throughout the test drive is close to 50 km.