Test with the Mercedes E-Class Coupe: the anti-claustrophobia pill

The brand-new Coupe of the E-Class grew in every direction and the growth can be sensed just where the rivals fail: in the rear seating area. Finally, the rear bench of a full-size coupe has become an alluring place. Test with the Mercedes E-Class Coupe in the E 220 d and E 400 variants.

Are you suffering from claustrophobia? Get an E-Class Coupe! You may be feeling that there is a contradiction in the two statements? Well, there is none: the coupe of the full-size model has grown in a single generation as others do in four. If the predecessor was actually a C-Class wearing the “make-up” of the E-Class, today’s model is a genuine full-size coupe. How come the former E Coupe (C207) was actually a C? Yes and I come up with arguments to confirm: it was underpinned by the platform of the C-Class and had the exact same wheelbase and the exact same track as the mid-size sedan. The argument brought in by the Germans was as viable as could be: the car was 180 kg lighter than the sedan. Thus, if we should compare the CLK that it replaced, we single out the 36% average improved performance and the 17% improved efficiency, advancements that it could not have registered if it was built on the platform of the E-Class. A half-way victory: the coupe won when it came to fuel consumption and agility, but it would not decisively move upwards in terms of interior space. The Stuttgart-based experts, backed up by the MRA modular architecture, can now provide space unparalleled within the segment, as well as driving dynamics and top efficiency, all in just one package. And this package is the all-new E-Class Coupe. 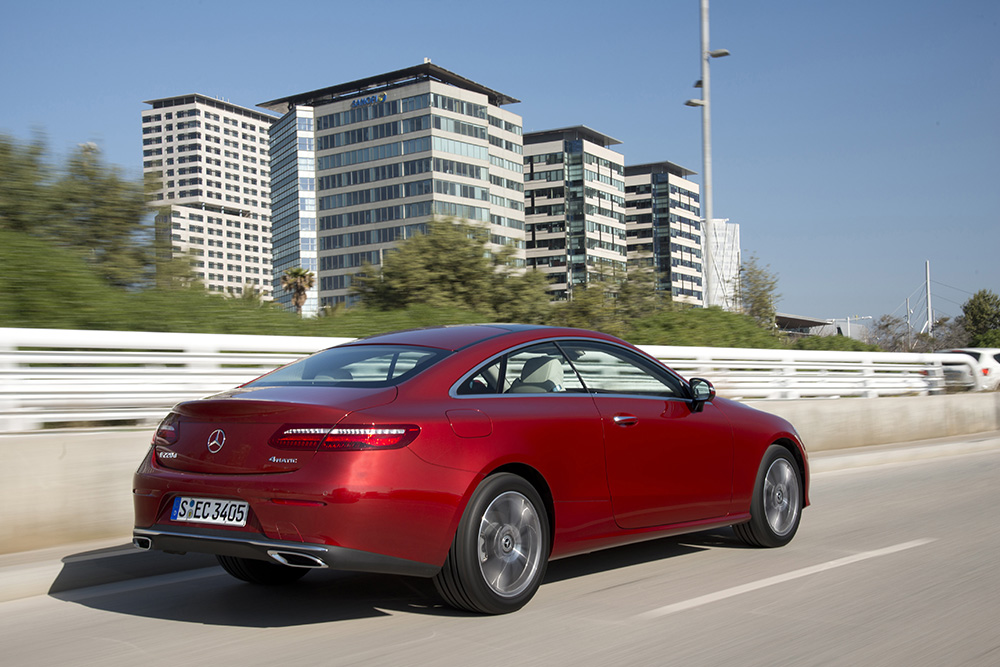 Compared with the previous generation, the car grew by 123 mm in length, by 74 mm in width and 33 mm in height, which can be felt in the rear seats. You pull the flap and the seat automatically glides forward and, once you get set in the rear seat, you get the royal-type of knee room (+74 mm), head room (+15 mm), shoulders (+34 mm) and elbows (+13 mm). Furthermore, the exquisitely profiled rear seats get a cup holder, a net pocket for smartphone storage and a 3-stage electrical heating system, which convert the new model in a purebred gran turismo. I know, there is plenty of praising and there is still a long way to go: the greenhouse line is horizontal, the B pillar is missing and the rear windows are descending, that is why you get the extra space sensation, especially when the car is fitted with the sliding sun roof. 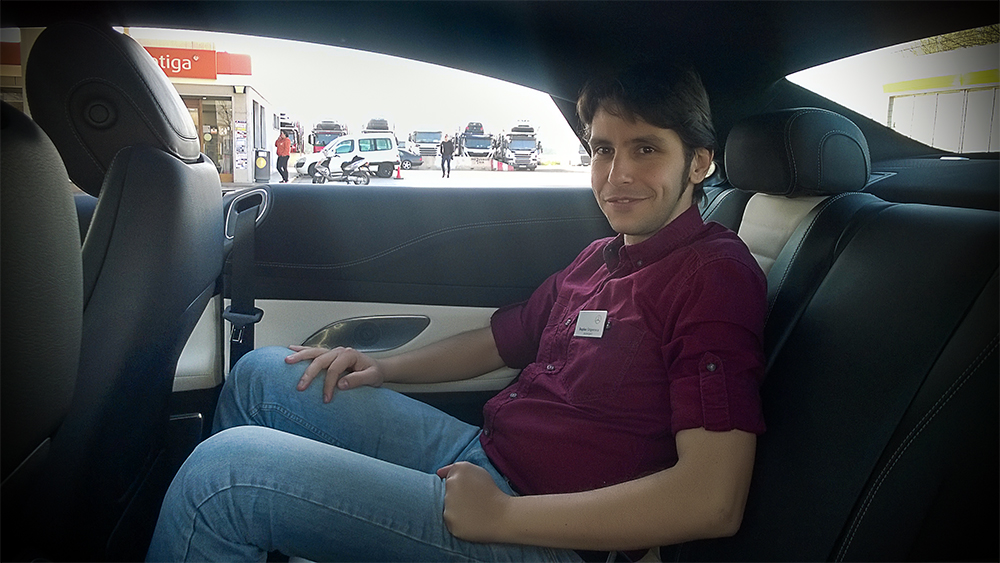 A single amendment though: there is no center armrest available in the offer, which, together with the lack of the passenger assist handles, make winding roads difficult to take in from the rear seats. An interesting fact though: the new E-Class is so generously spaced at the rear that it exceeds the space provided by the big brother S-Class Coupe! Don’t bother to figure out rivals that might reach the same rear seats space – you won’t find any. At the front – the same treatment: by 18 mm more headroom, 50 mm extra shoulder space and 38 mm extra space for elbows. We’ve had enough of numbers already – I believe it’s clear enough: on-board this car, no matter the seat that you select, you will enjoy the ride! 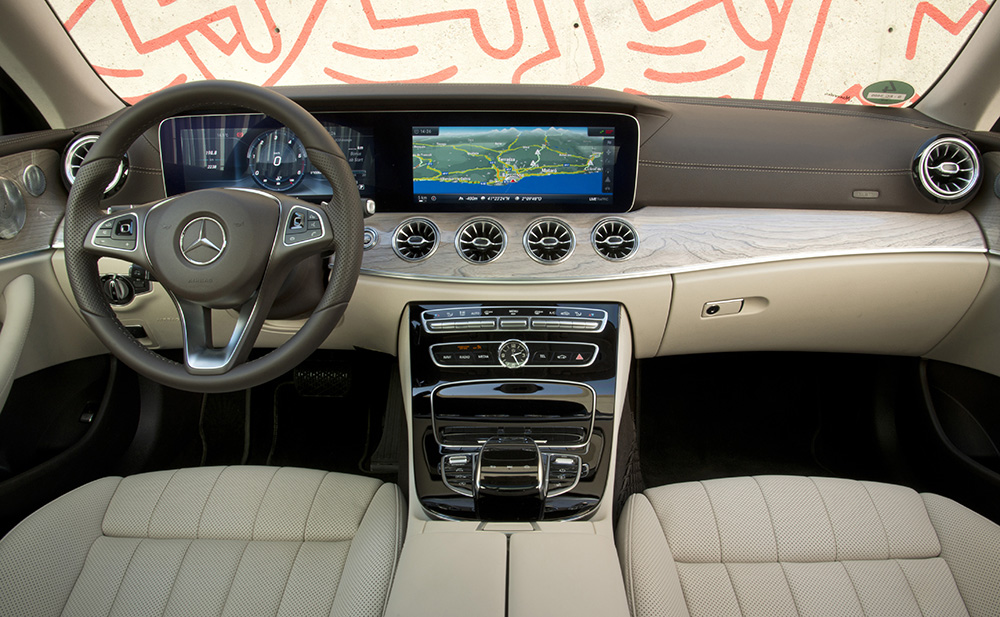 Beyond space, the customers will enjoy the same exclusive ambience present in the E-Class sedan, which includes dual 12.3-inch displays, plenty of wood, leather and aluminium. A sporty highlight is supplied by the innovative turbine-shaped air vents, but the sumptuous atmosphere is provided by the all-new light colored wood inserts, covered in aluminium dust and then lacquered, with a pearlescent and highly glossy aspect. It is, from where I stand, the most beautiful color in the offer. 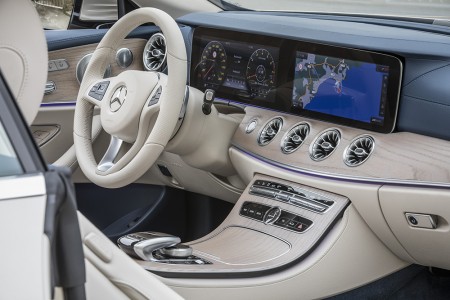 But what made me overjoy was the possibility to order the center console in honeycombed light brown elm (187 euros), instead of the piano black plastic that would not measure up to the interior materials quality. We learned that for the future, the sedan will benefit from the same offer.

Targeting a generous interior space, we can but guess that the designers had a rough roe to hoe in keeping the proportions and aerodynamics within acceptable limits. It may be so, but it turned out just right. The platform rightsized to fit the rear-wheel drive allowed pulling the engine backwards, thus achieving a typically gran turismo side line. Many of the edges were cut off, even the clearly defined shoulder line, present in the current Mercedes range, vanished, that is why we have, in front of our very eyes, a car that doesn’t only feature a clean line, but also the best Cd in the segment: 0.25. 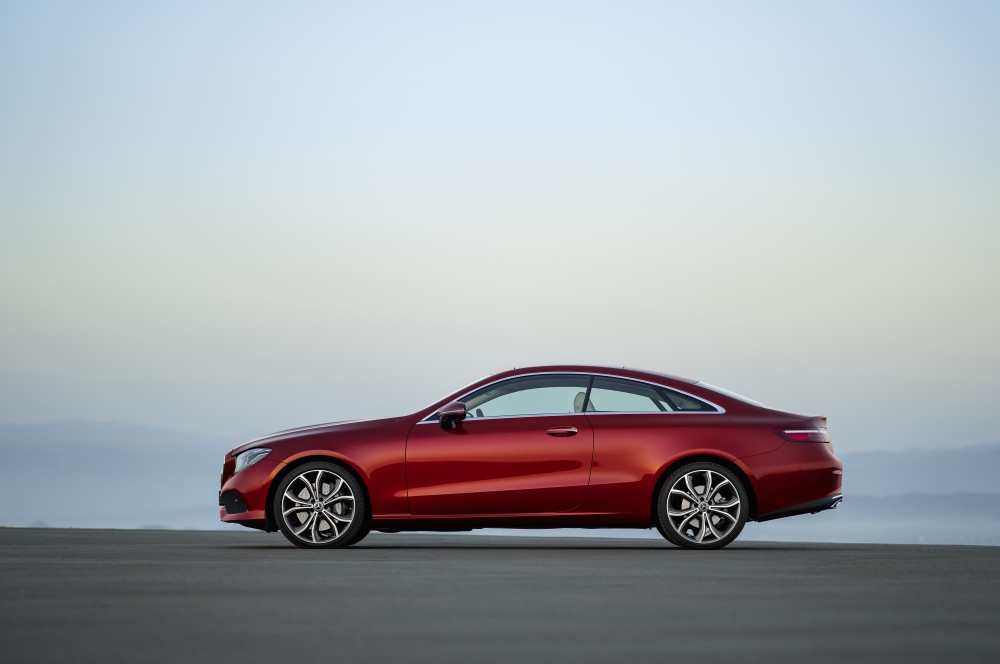 Two longitudinal powerdomes have risen on the engine hood, perfectly visible from behind the steering wheel. Just as perfectly visible is the road, if you fit your car with the Magic Vision Control windshield wipers, that spray onto the glass through nozzles aligned on the blade, just before the blade glides past the windshield, cutting off the “blind” seconds in which the liquid floods the windshield as in a classic mechanism. In traffic, the system efficiency is clearly sensed and Mercedes claims tat the system may save up to 50% of the windshield liquid amount. The benefits exceed the 357 euros cost, but the price of such complex blades remains to be seen.

At the series production start, the Germans provide a wide engine range that will subsequently get the more powerful versions. Two gas turbo engines are available from the offset, two 4-cylinder 2.0-liter units developing 184 HP (E 200) or 245 HP (E 300) and a 6-cylinder 3.5-liter unit with 333 HP (E 400), a diesel 2.0-liter power unit with 194 HP (E 220 d). They are all standardly coupled with the automatic 9-speed 9G-Tronic transmission. 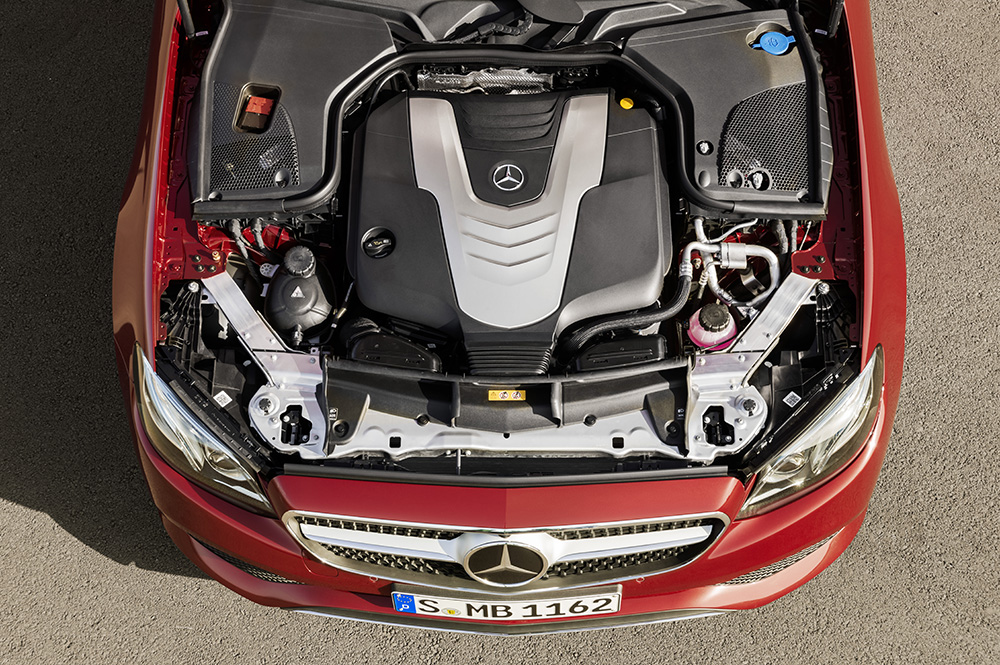 On the first test day, I selected the diesel power unit, coupled with the all-wheel drive 4Matic system and the classic Direct Control suspension. I discovered in it a refined companion, tht sends no noises, nor typical diesel vibrations into the cockpit. Through the hectic Mediterranean Coast city traffic, the Start-Stop system often cuts in, but with no shaking when starting. And the automatic transmission shifts gears unobtrusively, turning the urban ride into a relaxing experience.

Upon entering the highway, I engaged all driving assistance systems and got a script that matches the “Back to the Future” motion picture. The only conditions are to keep your hands on the steering wheel and activate the turn indicator upon changing lanes, as the system makes sure the road is clear, changes lanes on itself, brakes autonomously and keeps the distance from the car in front. I travelled like that for 100 km: all runs flawlessly, smoothly, with no hesitation and, above all, completely safe.

Back on the coastal road, for the Spain-typical winding sectors. I tackled them in the Sport+ mode and with the all-wheel drive system. If the Eco and Comfort modes seamlessly fit the urban routes and plain roads, they bring no delight on the winding roads: the shifts fall behind, the steering is too soft for a good feedback. Fortunately, the Sport and Sport+ modes exist to make your heart throb. The car metamorphoses, it becomes agile and manoeuvrable, the steering is less assisted, the transmission shifts ever higher, around 3,500 rpm, and the throttle response is ever prompter. Naturally, the entry-level diesel engine won’t get the most of the all-wheel drive system, but I occasionally managed to make the rear tires screech in hairpin bends. Drifting is out of the question: the coupe features a neutral behaviour, as it is well assisted by the active safety systems that would by no means undermine the driver’s enthusiasm. In other words – we laugh, we live intensively, but never fail to follow the perfect trace!

Once in Villa Calonge, I glance for the last time at the average fuel consumption of 6.2 l/100 km and at the superb ”designo Hyacinth red” paint (1,463 euros) and I anxiously wait the following day, for which I booked the top of the line E 400 Coupe model. 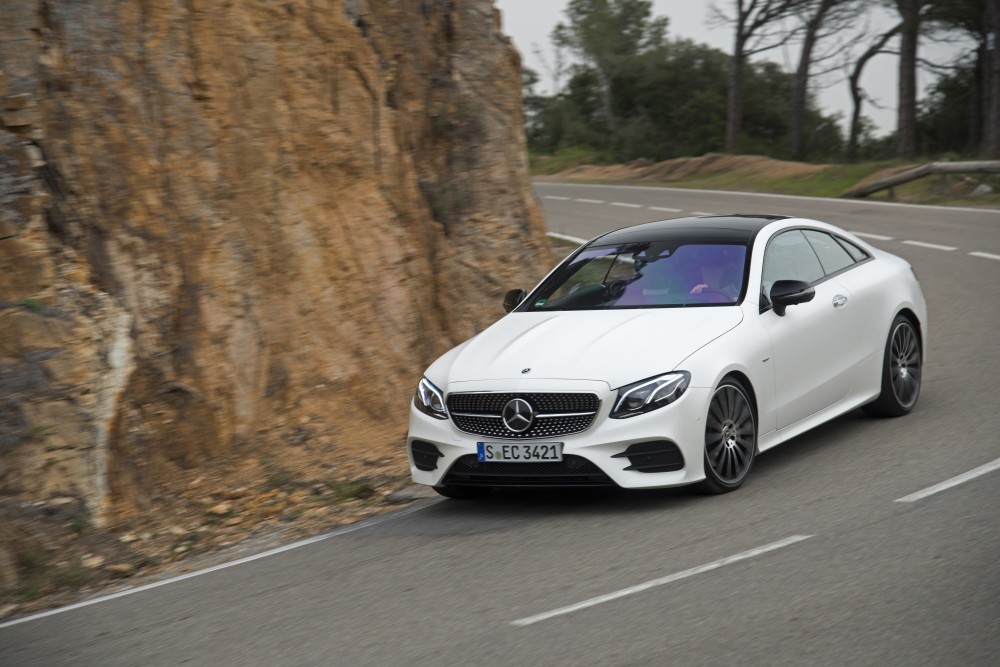 And here I am, after a night warmer than back home, behind the wheel of the most potent variant available. I start, I listen to the engine and all I hear is an indistinct hum: in idle speed, the V6 biturbo power unit is very quiet. I switch on to Comfort mode and go the hard way into the speed bumps, well filtered by the Air Body Control air suspension. But my patience fails me sooner than the car accelerates: I go into the Sport+ mode, I unleash all the 333 HP and 450 Nm and I get far more than the figures can show. The traction force is commanding and the optimized exhaust route brings a sound at the border line between pure-bred and challenging. It is not about intensity, that is kept at a decent rate, that would not jeopardize the supremacy of the future AMG variant, but about the grave tone when accelerating and about the deceleration bangs, around 3,500 rpm, which make me laugh ceaselessly, with an unimaginable craving and with a slightly silly mug. 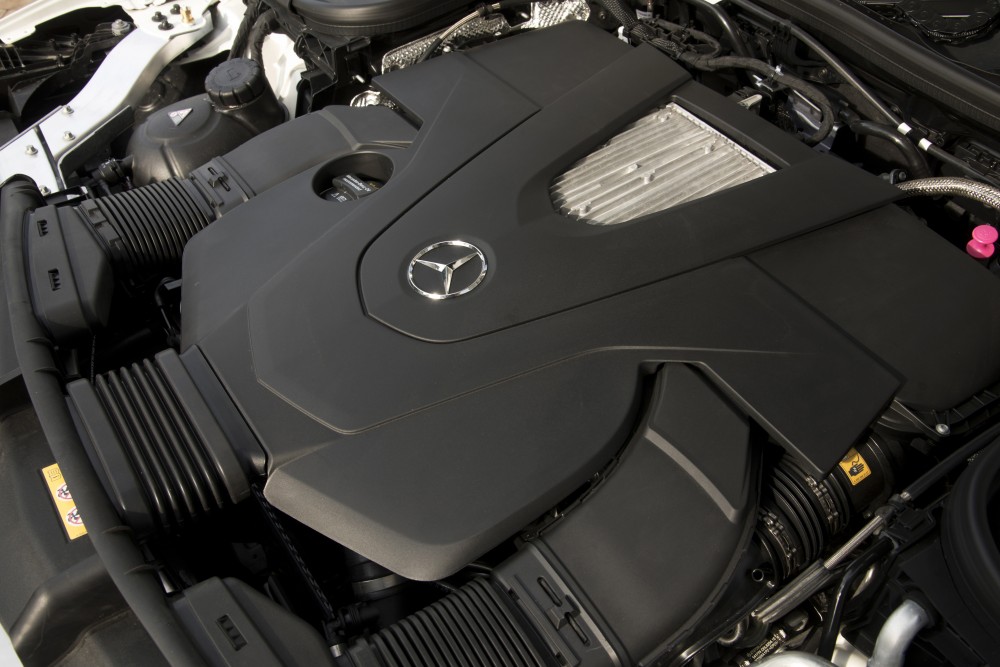 Well, this is a Gran Turismo with a vengeance! The bends are served with an elegance that makes no room for fear, supported by the air suspension, that would not let the chassis lean on bends and by the all-wheel drive. It is virtually the perfect way to start the day… with three friends keeping you company: four generously seats, charming dynamics, elegance and, above all, the winding roads and sceneries of Catalonia. Two little details only separate us from this privilege: 64,896 euros (the starting price of the model) and the 16.5 l/100 km, as much as our unit wolfed up when pushed to the limit along the road with turns. Details only… 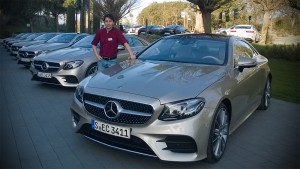 It is next to impossible to find flaws in this car, such overwrought it is. The imperial space makes it skyrocket to the level of a Gran Turismo-like coupe, and this stands as the top advantage of the new generation. It is beautiful, it is agile, it is efficient when it comes to the 4-cylinder motorized models. The prices start at 50,000 euros, but the extra equipment can double them. The financially prudent ones will make no mistake in choosing the entry level diesel viriant: is is well-bred and it has low fuel consumption. The V6 biturbo engine in the E 400 brings a bit of the AMG world for less than 65,000 euros. True athletes must still wait though, for the V8 biturbo-powered AMG E 63.